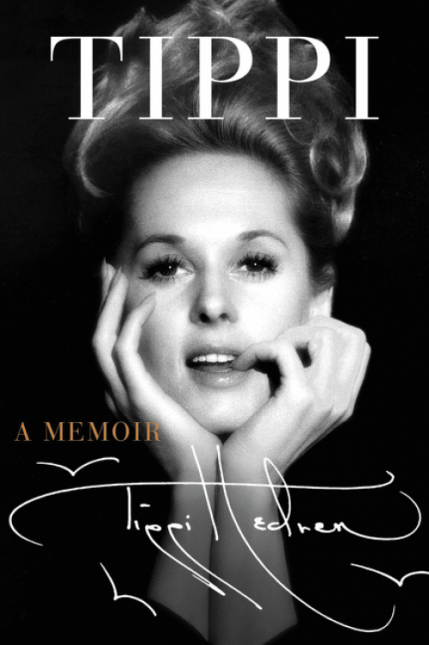 Seventy-six years ago, a girl in Lafayette, Minnesota, decided to become a figure skater. Day after day, she practiced diligently, but an athletic injury and an emergency appendectomy dashed the dream.

According to Tippi: A Memoir, by actress Tippi Hedren, the disappointment was eventually superseded by pubescent popularity, gaggles of girlfriends, first love, and a surge of serendipity that has seldom subsided.

“I imagine there are moments in all of our lives that we look back on and say, ‘That’s when it all started.’ That moment for me was a seemingly ordinary trip home from a seemingly ordinary day at school…I stepped off the streetcar at my usual corner…and a woman I’d never seen…walked up to me. ‘My name is Ella Jane Knott,’ she said as she handed me her business card. ‘Would you please ask your mother to bring you down to Donaldson’s department store at her earliest convenience? I would like to have you model in our Saturday fashion shows.’”

Soon, at the age of 15, life was practically perfect.

“[P]hotographers were asking me to do print work…I was having so much fun, getting to wear pretty clothes…For the first time in my life I got to experience an amazing phenomenon called ‘spending money.’”

With her father’s mercurial health on the decline, the family relocated to Southern California. There, with referrals from Minnesota, Hedren restored the momentum to her modeling, mixed with classmates, and briefly enrolled at Pasadena City College until she — and her boyfriend — were thrown out for not being residents.

Restless, but relieved to be free of academics, Hedren contacted the Ford Modeling Agency in New York. Two weeks after dispatching her portfolio, she received a call from Eileen Ford requesting a meeting. She took the train east, while the firm secured a room at the Barbizon Hotel for Women.

Hedren recounts, “[Eileen Ford] was all business, a bit brusque and imperious, clearly not a woman who wanted to chat for a while and then head on to lunch together…after what seemed like only a few minutes, she called a photographer and said, ‘I have a new model,’ and just like that, I started working, less than an hour after I walked through the…door.”

The first week, Hedren earned $350, the 2016 equivalent of $3,500. Her exquisite face was seen on runways and spread across glossy print magazine ads in “Glamour,” “The Saturday Evening Post,” and “Seventeen.” When television became popular in the 1950s, “We were booking…commercials, delightedly opening refrigerator doors on camera, taking ecstatic sips of coffee, and gracefully waving our hands over shiny new Studebakers…”

The exposure morphed into a meeting with Peter Griffith, Hedren’s first husband and father of her daughter, actress Melanie Griffith. The marriage did not last. By the early 1960s, fashion assignments had abated and money anxieties were ramping up — until a lucky Friday the 13th in 1961. Hedren’s telephone rang, and a voice said:

“Are you the girl in the Sego [diet drink] commercial?...[A] ‘well-known’ director and his wife had been watching The Today Show…and happened to see the commercial. He’d promptly called the executives at Universal Studios, where he was under contract, and ordered them to ‘FIND THE GIRL.’”

Four days later, the unnamed admirer, Alfred Hitchcock, put Hedren under a long-term contract. Intending to give her a screen test, Hitchcock and his wife, Alma, coached her intensively for weeks. She believed all of the work was for a small television role, but, to the chagrin of the studio, Hitchcock had a different angle — he gave Hedren the lead in “The Birds.”

The doting Hitchcock sent her gifts, baskets of fruit, and stationery; he sizzled with sexual innuendos and made clumsily lewd advances — on and off the soundstage. She rejected him with deflections, slaps, and walkouts, but the director was unstoppable. Hedren was followed, her handwriting was analyzed, and — at suspicious hours — he drove by her home.

“I couldn’t tell anyone. It was the early 1960s. Sexual harassment and stalking were terms that didn’t exist…Besides, he was Alfred Hitchcock…and I was a lucky little blond he’d rescued from relative obscurity.”

And then, rattled with rage, Hitchcock went for revenge.

“Everything was building toward the famous ‘bedroom scene’ [in The Birds]…in which Melanie goes up the stairs alone, steps into the bedroom, closes the door, and suffers the most vicious… attack by the birds in the whole film. Hitchcock had outlined it for me in great detail. It would be just me and a flock of relentless, homicidal mechanical birds…”

But, he lied. A live flock was used in the scene, which required five days of filming until he was satisfied. The movie was a success, the star had a near breakdown, and the director defended his devices: “Blondes make the best victims. They’re like virgin snow that shows up the bloody footprints.”

Universal, impressed by Hedren’s follow-up performance in Hitchcock’s “Marnie,” endorsed a campaign for an Oscar nomination, but the powerful director quashed it. Hedren demanded a release from her obligations, he promised to “ruin” her career, and the two never spoke again.

During the filming of 1970’s “Satan’s Harvest” in Africa, the couple became — unexpectedly — enamored of lions. Upon their return, they planned a picture about a family living with them. Later, they purchased 40 acres outside of Los Angeles, revamped it to accommodate their dozens of large wild cats, and released “Roar,” a movie 11 years in the making, that cost $17 million, battered two persons into bankruptcy, divorce, and — for the mostly-hidden-from-Hollywood-Hedren — a lucky career boomerang.

Now, 86, with four decades of animal advocacy wisdom, Hedren is president of the Shambala Preserve, an organization that caters to endangered lions, tigers, leopards, cheetahs, and panthers. Felines — not film — matter more.