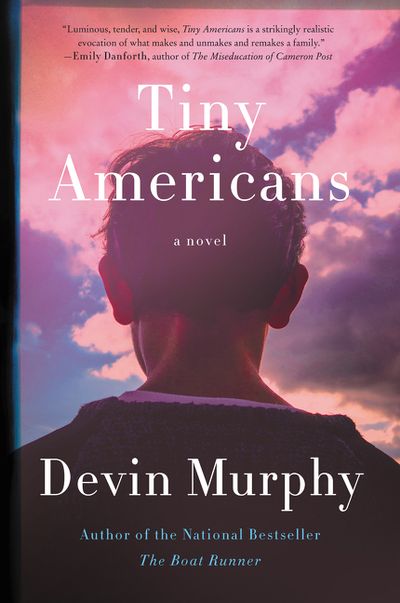 Tolstoy really hit the nail on the head with his proclamation that "Happy families are all alike; every unhappy family is unhappy in its own way." If he were alive today, it’s possible he could’ve saved himself a lot of work and just tweeted that.

Lucky for us, he had to write a novel to support the idea instead, and we’re still talking about Anna Karenina centuries on. In Tiny Americans, Devin Murphy introduces us to the Thurber family, a brood that is not only unhappy, but in which each member is unhappy in his or her own way.

The scope of Tiny Americans is anything but small as the Thurber kids — Jamie, Connor, and Lewis — along with their ill-paired parents, Terrance and Catrin, divvy up the narration of the novel with each chapter told in one of their alternating voices.

Some shoulder more of the load than others, and years pass between each dispatch we receive from their lives. It’s a technique that can work well, but, in this case, the effect is scattered.

For this type of narrative structure to be effective requires characters a reader can fix in their mind. Sure, a character will evolve and change, but there has to be some unfailingly identifiable trait, habit, or even hairstyle you can use to identify them beyond a doubt wherever you encounter them.

In Tiny Americans, the shifts are so drastic, with each vignette so untethered from the rest, that it’s difficult to build any connection to the characters or develop a sense of the story.

Throughout, the brothers remained slightly amorphous to me, predictably destroying or running from relationships with either their respective pride or penis leading the way. Sister Jamie, at least, gets an interesting arc through life, though it brings another failed marriage. She enjoys more ink than her mother, Catrin, though, who gets one measly chapter — the shortest in the book at a scant three pages.

That means we primarily see Catrin through the eyes of her emotionally immature children and the husband who leaves her to raise them alone. It’s a decision that seems to speak to the ways we devalue motherhood as a society and the expectation and scorn a woman receives for doing her best to meet her responsibilities while daring to try to find space for herself, as well.

Here, a young Jamie contemplates her mother’s surprise drunken plea that Jamie never have children of her own:

“I wanted to yell at her but swallowed those feelings because I didn’t know what hidden need was pulling at her to say those things. The trajectory of her day was always building upward to some manic excitement about one thing or another, always ending like some sort of fabulous Roman candle, flowing light for a few incendiary moments before leaving that phantom path in the dark where the tails of fire had been.”

But this novel isn’t about Catrin — though I might like to read one that was — it’s about redemption. Years after abandoning his family, Terrance has a near-death experience that prompts him to rethink his literal distance from his semi-estranged kids. He’s gotten his life together, has a new partner he’s committed to helping through her own struggles, has stopped drinking too much, and has started creating rustic art. So he sets in motion an effort to bring his kids — and theirs — together.

All of which leads us to this: Whenever someone trots out that Tolstoy quote, there’s usually an assumption that the unhappiness of any unhappy family makes that family interesting. Often, it does, whether because they provide some solace that your own family isn’t the absolute worst, or because they offer some literary Schadenfreude wherein no actual people get hurt. What makes the Thurbers less interesting is that their misfortunes are all you get to see until the very end.

The conclusion is, in fact, a redemption. We finally get glimpses of the beauty of returning to the fundamental connections that shaped a life. We see — with just five pages to go — the love and light that bonded the Thurbers in the first place, and it fuels the possibility of redemption not just for Terrance, but for all of them. The question is whether that’s enough to redeem the novel.

Tayla Burney is an avid reader who is passionate about literacy and tweets entirely too much at @taylakaye. She also writes a weekly literary newsletter rounding up area events for readers in the DC region.