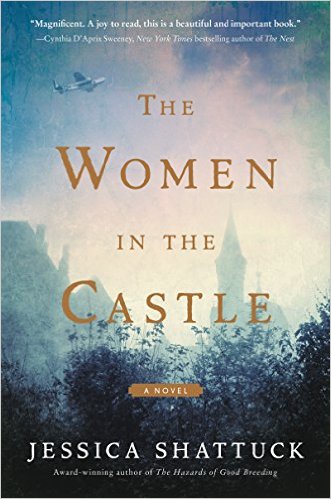 People may go to war when they are ready, Niccolo Machiavelli wrote, but they cannot always withdraw when they like. It’s a tragic truth, to which Jessica Shattuck might add that even when a war is over, its participants still cannot withdraw. War haunts.

War certainly haunts the protagonists of Shattuck’s wise third novel, The Women in the Castle. After a failed plot against Hitler, the plotters’ widows and orphans stumble through the wreckage of their lives. When armed hostilities cease, they face the monumental task of starting over in a Germany still bitter with conflict.

Marianne von Lingenfels anchors this women’s reconstruction effort. When the men first decide to resist Hitler, her beloved friend Martin “Connie” Fledermann dubs Marianne the “commander of wives and children.” His title smarts like a slap, she thinks, but after the plot fails and the men are all executed, Marianne understands her assignment differently.

“She was the last man standing, the decoy left holding the key. Though what she was supposed to do with it remained opaque.”

Eventually, she decides she will seek out the widowed survivors and host them in the drafty, leaky castle owned by the family of her aristocratic husband, Albrecht.

Her first order of business is to track down Benita, Connie’s young wife, and their son, Martin. Marianne rescues both: Benita had passed from soldier to soldier, ultimately becoming the hollowed-out, kept woman of a Russian commander in Berlin, while Martin is lodged in a Nazi home for the blameless children of traitors.

Marianne hates the Nazis with the clear moral disgust she levied at them from the beginning. But not everyone can draw a stark line between innocent and guilty. Benita was a member, albeit an indifferent one, in one of Hitler’s youth groups when she first met the dashing Connie Fledermann, and she retains her indifference to politics even after Connie eventually gives his life for the resistance.

Not surprisingly, she and Marianne make for an uneasy pair. Marianne feels bound by her vow to protect Connie’s wife and son, and Benita is overwhelmed with gratitude to Marianne for uniting her with Martin after the Nazis stole him from her as punishment for Connie’s treason.

Fortunately for both women, the local American troops soon tell them they’ve found a third widow (based on a list provided by Marianne). Ania is quiet but steady, and practical in a way that neither Marianne nor Benita is. They both relish the ballast she provides to their improvised family on the hill.

But their Eden, such as it was, is short lived. The women have their secrets and their wounds, like all of Germany, and no one is sure just how to heal. Benita would prefer to embrace what’s left of the world and forget the horrors. Marianne insists on enforcing everyone else’s penance. Ania tries to forge ahead with a practical future for her two traumatized boys, but the past comes to find them.

Meanwhile, like the chorus of a Greek tragedy, the local villagers, most of whom supported the Nazis’ promises of better jobs, and now believe claims of atrocities are fabricated, sulk in the shadows.

The cumulative effect of these hopeful, outraged, misled, and guilty humans is stunning. In a narrative that bounces back and forth in time, Shattuck contrasts the nearly incomprehensible horrors that Germans committed (or half-knowingly ignored) with the impulses of grace and forgiveness. It’s a miracle Germany recovered as well as it did from its post-war wasteland; it’s an indictment against us all that wartime Germany fell as far as it did.

On the first Christmas after the war ends, the women and children in the castle join the sullen villagers in an open Mass at the local Catholic church. But no one is there for the service — they all came for the Ehrenheim orchestra, giving its first performance in years. And when Beethoven’s Ninth sings forth from their instruments, the hungry and freezing Germans are rapt. Some weep, and when the symphony is over, no one speaks.

“The music stiffened the hardened sediment of their memory, chafed against layers of horror and shame, and offered a rare solace in their anger, grief, and guilt. Years later, as a professor, Martin would try to find the words to articulate the power of togetherness in a world where togetherness had been corrupted — and to explore the effect of the music, the surprising lengths the people had gone to hear it and to play it, as evidence that music, and art in general, are basic requirements of the human soul. Not a luxury but a compulsion.”

The Women in the Castle pleads the case for humanity as both dreadful and beautiful. We can follow orders to march a young mother and two children into a forest and shoot them, but we can also give up our own lives in the pursuit of justice. Just how we humans can hold such terror, beauty, and forgiveness in our hearts is a mystery. But this incisive story, with insights both large and small, does the elegant work of exploring how three wounded women find answers.

Carrie Callaghan’s fiction has appeared in Silk Road, Floodwall, the MacGuffin, the Mulberry Fork Review, and elsewhere. She lives in Maryland with her family and two cats. Find her on the Internet on Twitter at @carriecallaghan or at www.carriecallaghan.com.