The Window Seat: Notes from a Life in Motion 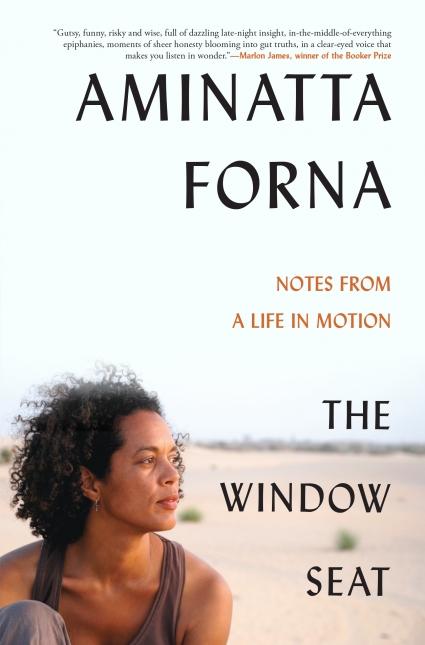 As we emerge from the pandemic, our souls shaken and our arms sore from the vaccine, the title essay in Aminatta Forna’s new book may make readers bristle. Focused primarily on the passenger seats of airplanes, it luxuriates in the experience of vast flights to far-flung places, its language as soaring as the clouds casting shadows on the oceans below.

Nevertheless, after a year of miles-long lines at food banks, looming evictions threatening millions, and a death toll driven ever higher by those who refused — or were unable — to stay home, it’s hard to read about international travel without feeling an odd tendril of suspicion.

Each essay flip-flops across time and location, confronting the truth that nobody is from just one place or one era, but is instead a mosaic of many contradictory things. The author picks apart her own history throughout and looks at the links among colonialism, migration, and rebellion.

In “Obama and the Renaissance Generation,” she chronicles how many of the brightest young people in Africa were once sent to the U.S. or Europe to study. While the hope was that these mostly young men would return and revitalize their home countries, many stayed abroad or went elsewhere. Barack Obama's father was a product of this education trend, as was Forna’s. Mohamed Forna, from Sierra Leone, met Forna’s future mother while studying in Scotland. The family moved from the U.K. back to Mohamed’s birth country, where he got involved in politics and was hanged for treason in 1975.

Like human memory, the story of Forna’s father doesn’t unfold linearly. It is masterfully woven into both the lives of other people and the changing world around Mohamed himself. Much of what we learn about him, in fact, comes from a servant called Santigi, who stands by the family even after the worst happens.

Forna’s mother’s story, too, is told indirectly, but this time, through a place: Shetland. An island between Scotland and Scandinavia, Shetland is now a tourist destination, made famous by a bleak murder-mystery TV series. Forna uses the blustery, croft-dotted moors and craggy puffin-covered coastlines to unpack the legacy of migration on her mother's side. While not as dramatic as her father's, her mother's story wonderfully complicates Forna’s own identity in ways that will take many reads to unpack.

The author’s witnessing of history goes beyond that of her parents, though, and extends into the rest of Forna's life. After her widowed mother married a United Nations representative, the family moved to Iran for a time. There, the teenage Forna saw firsthand the Islamic Revolution and toppling of the shah. Recalling it all in “1979,” she allows her writing to zoom in and out, examining both the history that unfolded around her and her own changing world as she began to go swimming with neighbors and attend curfew parties in Tehran.

In “What If You Gave an Inauguration and Nobody Came?” the adult Forna wanders the deserted streets of Washington, DC, following Donald Trump's swearing-in. The empty bleachers, she writes, make the malignant nationalism surrounding Trump’s victory lose a bit of its bite. In this and other essays, the boundaries between history and memory, between witness and participant, start to blur.

The Window Seat also embodies the concept of the personal as political. In “The Last Vet,” for instance, Forna reports on the sole veterinarian in Sierra Leone, who works relentlessly to save the street dogs of his city. To secure funding, he must do a delicate dance between how Western donors view the concept of animal welfare and the realities of what he can achieve on the ground. A clash of cultures is brought to life in the story of this one man.

“There are those who leave and those who stay, and they're those who go for some other reason: Privilege, position, marriage, work, escape,” Forna writes. As a storyteller, she embodies all these things. As we grapple to make sense of a world that’s both been brought closer together and separated further by a global pandemic, maybe it’s writers like her who can help us decide what comes next — and how to better understand each other along the way.

Waco: David Koresh, the Branch Davidians, and a Legacy of Rage

A searing indictment of a tragedy that never should’ve happened.