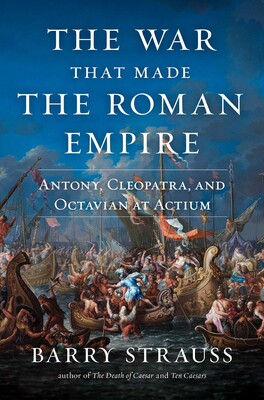 “Whoever said that war never settles anything was not thinking of Actium.”

Few episodes in ancient history are more dramatic than the titanic clash of allies-turned-enemies Octavian and Marc Antony to establish their separate visions of Rome in the late 1st century BC. Culminating in a staggering set-piece naval battle along the rugged coast of western Greece in 31 BC, the winner would ultimately fix the former republic’s course toward empire — the greatest the world has ever known.

In The War that Made the Roman Empire, ancient-history expert Barry Strauss delivers this timeless tale with erudition, insight, and a keen analysis of the major (and minor) players who set the world on fire.

After Julius Caesar’s assassination in 44 BC, Rome was thrown into years of turmoil. As Antony and Octavian initially worked together to hunt down and eliminate Caesar’s assassins, the question of who would claim Caesar’s mantle afterward set the stage for future conflict. Antony, a proven military commander and consul during Caesar’s reign, believed he was the rightful replacement; Caesar’s 18-year-old nephew, adopted son, and heir, Octavian, thought otherwise.

Making sense of the heaving tensions and loyalties of this time, Strauss observes that “rarely in history have so many powerful people changed sides so often — and with such good reason.” Agreeing to share Roman rule and administer their allotted territories, the triumvirate of Octavian, Antony, and the “unmeritable” Marcus Lepidus held for a brief period before an elemental force from across the Mediterranean sliced apart the fraying coalition: Cleopatra.

Descended from the proud Ptolemy family that had ruled Egypt for 300 years, Cleopatra “fascinated even those who feared her” during her 21-year reign. She was an astute politician and able administrator who spoke seven languages (including Egyptian, the only Ptolemaic ruler to do so). Her intelligence, wit, and charm were virtues to her fans and vices to her enemies.

Strauss sifts through the scant sources to reveal a woman of majestic stature (thankfully eschewing the sexpot portrayals from antiquity and later) who, had she succeeded in surviving Octavian’s onslaught, might have been compared “to a grand strategist like England’s Queen Elizabeth I or to an empire builder like Russia’s Catherine II the Great.”

The wheels of fate began to turn in 41 BC, when Antony and Cleopatra met again, and their great love affair ensued. For Octavian, Antony, and Cleopatra, the decade of 40-30 BC was tumultuous and eventful, with smaller wars against other rivals engaging their energies. However, the new “merger” of Antony and Cleopatra — his clout, her riches — represented “Rome & Egypt Inc.” to Octavian, and he rightly feared their combined power. Enter Octavia, another of those “seemingly minor players [who] were major influencers.”

In 40 BC, seeking to squelch suspicion and seal stronger bonds of loyalty, Antony agreed to marry Octavian’s beloved elder sister. Strauss wonderfully revises the usual passive and put-upon portrayal of Octavia to reveal another canny and clever female power broker whose role in Octavian’s ultimate triumph is often downplayed and overlooked.

In the eight years of their marriage, Octavia successfully mediated situations between Octavian and Antony that avoided outright hostilities (and gave a slight edge to her brother). When Antony divorced the esteemed and dignified Octavia in 32 BC, his “unforced error” was a propaganda windfall for her brother, who proceeded to move against both Antony and Cleopatra with a Senate declaration of war. In several ways, Strauss elevates Octavia’s role and makes the bold claim that “she had done as much for the House of the Caesars as any military commander.”

One military commander who did recognizably contribute to Octavian’s victory was Marcus Agrippa. By 31 BC, Agrippa was Rome’s most decorated naval officer. Strauss claims that in one of the turning points of the war, Agrippa’s brilliantly executed surprise attack on Antony’s supply port at Methone in March 31 BC sealed Antony’s fate at Actium six months later. Octavian’s land forces and Agrippa’s stunning sea victories choked off supplies and reinforcements, leaving Antony and Cleopatra with half the ships and soldiers needed to confront their enemy on the waters off Actium on September 2, 31 BC.

Strauss reconstructs the naval battle in detail and interrogates the sources to reveal not so much a fight as an attempted breakout of Antony and Cleopatra’s ships. He also corrects the myths surrounding Antony’s escape. (Did Cleopatra abandon him? Was he rushing after her, blind with love? Most likely not.) Strauss’ depiction of the battle is well worth the book’s long setup, as is the account of the aftermath, with its high drama, political pomp, and yes, doomed-romance denouement.

“Victory at Actium meant peace,” Strauss concludes, with young Octavian transforming himself into the revered Caesar Augustus, who “ended a century of civil wars and laid the foundations of two hundred years of peace and prosperity: the famous Pax Romana.”

As for Antony and Cleopatra? Well, everyone knows how that ended. In The War that Made the Roman Empire, Barry Strauss once again proves his ample street cred in all things ancient and Roman as he reanimates and reappraises a handful of history’s most interesting and electrifying characters.

Peggy Kurkowski is a professional copywriter for a higher education IT nonprofit association by day and major history nerd at night. She writes for several book-review publications, including Publishers Weekly, Library Journal, BookBrowse Review, the Historical Novels Review, Open Letters Review, and Shelf Awareness. She hosts her own YouTube channel, The History Shelf, where she features and reviews history books (new and old), as well as a variety of fiction. She lives in Colorado with her partner (quite possibly the funniest Irish woman alive) and three adorable, ridiculous dogs.

Steam Titans: Cunard, Collins, and the Epic Battle for Commerce on the North Atlantic

The decades-long fight for supremacy between two mammoth freighter lines.