The Thing with Feathers: The Surprising Lives of Birds and What They Reveal About Being Human 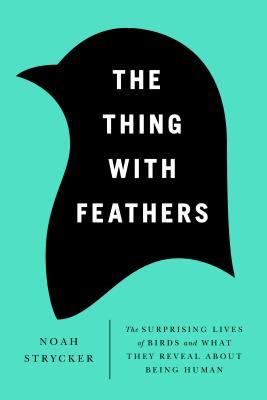 Hope of finding roadkill propelled high schooler Noah Strycker down Oregon highways one summer month a decade ago. A birding prodigy, Strycker needed a fetid carcass to lure turkey vultures to his backyard for close observation and photographs. At last a car-crumpled deer, ripe enough to buzz with blowflies, appeared on the baking pavement. Aspirations satisfied, Strycker shoveled the corpse into his trunk and drove home happy, despite the stench, with his head out the window “like an excited puppy.”

Still only 27, Strycker has studied, photographed, sketched, and written about birds on six continents. Three months of dodging blizzards as an intern counting Adélie penguins resulted in his first book, Among Penguins: A Bird Man in Antarctica, and a popular audience eager for another witty and adventurous report from the field. The title of his new work may at first give pause; The Thing with Feathers is easily confused with a requiem for extinct species that deploys the complete Emily Dickinson line (Hope Is the Thing with Feathers, by Christopher Cokinos, 2009). But too much hope must perch in Strycker’s soul for him to dwell overlong on nature’s losses. A better clue to the eclectic and ebullient style of his delightful new look at animal behavior is in the subtitle: The Surprising Lives of Birds and What They Reveal about Being Human.

Solving puzzles is Strycker’s favorite method of revealing the unexpected. To tease out conflicting theories of cooperative breeding, the author studied fairy-wrens so intensely that he could recognize 100 birds on sight. Understanding social dominance hierarchies led deep into research studies of poultry and discoveries such as efforts to reduce aggression by outfitting factory farmed hens with red contact lenses. Besides baiting vultures himself, Strycker recounts flawed tests by Audubon and others supporting the centuries-old myth that birds cannot smell and the struggles of modern scientists to determine which gases emitted by decaying flesh appeal most to feathered scavengers.

Tales of Clark’s nutcracker, beginning with the journals of the species’s 19th century discoverers Lewis and Clark, belie assumptions of poor bird memories. These crow relatives survive in western mountains year-round by caching and relocating tens of thousands of pine seeds each winter. Stryker adroitly dramatizes the magnitude of this feat by comparing the birds with human memory athletes, who compete to recall the longest sequences of random numbers or shuffled playing cards. Both nutcrackers and people, says Strycker, rely on mental maps to organize such complex memories. He could be summarizing the whole book’s narrative approach in explaining that “the brain — any brain — needs a story — any story — to latch onto important information.”

Clark’s nutcrackers can also use tools, a skill once considered uniquely human. Challenging boundaries believed to separate people from other animals is a recurrent theme in The Thing with Feathers. Who knew that crows feel grief, magpies recognize their own reflections, and some parrots can dance to a beat?

The most beguiling question may be: can birds make art? Stryker approaches it from several angles — from cultural and historical to physiological and evolutionary — always enlightened by his keen observations of complex courtship rituals of bowerbirds in the outback. Other animals build structures and even embellish them, such as spiders that decorate webs with extra silk, but bowerbirds remain the only ones besides humans that create objects solely to attract viewers. This startling fact leads Strycker to conclude that “if a well-designed bower is more like a Picasso painting than a piece of furniture, then the bowerbird is no mere carpenter — he is Picasso himself.”

Perhaps the most touching surprise revealed is the possibility that birds too can feel hope. What other emotion could account for a wandering albatross, clinging to a windswept nest for weeks, awaiting its life mate’s return from 2,000 miles across the sea? Albatrosses, like the peripatetic Strycker, may have honed their hopes “in the chillest land – / And on the strangest Sea,” fortifying their optimism in bold travels as predicted in Dickinson’s poem.

The result is a book replete in the joy of discovery and, even more, the hope of continued surprises. Readers will ask only for more books from Noah Strycker that share his encompassing and unabashed love of the natural world.

Julie Dunlap writes often about the natural world, environmental history, and climate change, including an essay, “Annapolis Bus Ride,” in the new anthology

In this detailed account, the author uses multiple sources to chronicle the achievements — and limitations — of America’s nascent political system.