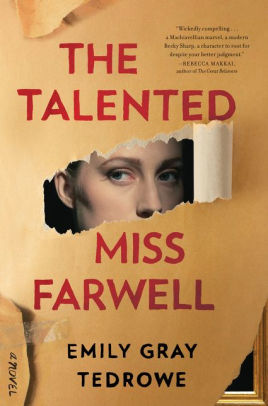 Becky Farwell, the eponymous protagonist of the impressively written, high-concept The Talented Miss Farwell, first takes the stage as a high-school math prodigy living in Pierson, Illinois, with her widowed father. Becky’s dad is in failing health. A dealer in agricultural vehicles, he’s lost his business edge. Becky, clearly a remarkable lass, steps in unobtrusively to turn the faltering dealership around.

But as convention seems to prescribe in small-town fables like Becky’s origin story, events soon veer toward heroic self-sacrifice. Becky passes on college to tend to Pop, settling for an entry-level bookkeeper job in her hometown government.

Gifted with talent, drive, and ambition, she thrives in her administrative niche, discovering caches of unused funds in the morass of city accounts — many long forgotten — that the town can put to good use. Her reputation among her fellow bureaucrats blossoms; “Becky always finds a way” becomes her personal brand. She rises quickly, becoming city controller in just a few years.

But there’s one hitch in this upright, Horatio Alger formula: Becky Farwell has a side gig. Thanks to her access to the town’s bank accounts, she’s become a prodigious embezzler, “borrowing” thousands — and ultimately millions — from Pierson’s coffers to feed a newfound passion: collecting contemporary art.

To carry it all off with the proper flourishes, Becky engineers a secret double life for herself, and the daring masquerade becomes the thematic core of this intriguing, fast-paced tale.

Although Tedrowe, a storyteller of impressive talent, anchors her tale in modernity and pop-culture mythologizing, her premise is a familiar one of deep ancestry. Think Jekyll and Hyde, or Oscar Wilde’s John Worthing popping about as “Jack” in the country and “Ernest” in the city.

Tedrowe’s casting of her tale differs vastly in tone from these 19th-century prototypes, of course. But the archetype persists, and though her alter-ego trope generally flows gracefully on a current of authentic-feeling events, fortuitous and otherwise, it occasionally hits a snag that strains credulity.

The novel does have its flaws. Its persistent scenic counterpoint often teeters at the edge of cloying wealth pornography at one end and bald social condescension on the other. Consider the contrast between the respective celebrations marking the heroine’s 40th birthday, beginning with Reba’s crowd’s efforts:

“What followed was a nightmarishly over-the-top four-day weekend in a Punta Islita villa with two private staff members for every guest, no Wi-Fi, and drunken Europeans being loudly naked in the pool all day and night…On day three she found a giant bullfrog in her toilet…

“…The second party…was in the Town Hall second-floor conference room, of course, where Becky was toasted with a long limerick-style poem whose line endings threatened to be risqué but mostly reverted to rhyming ‘Farwell’ with ‘barbell’ or ‘is swell’.”

Tedrowe’s title clearly means to invoke Patricia Highsmith’s “talented” Tom Ripley, an impulsive imposter with an imagined alter-ego of his own. Like Ripley, Becky seldom pauses for more than a moment to consider the moral or ethical consequences of her actions. Still, she often fantasizes about paying her employer back.

This never happens, and the locals bear the brunt of Becky’s fiscal depredations.

As just desserts descend, a wash of dawning soap-opera sentimentality clouds the narrative. This lurch in tone threatens to turn it all into a didactic fable, a throwback that this mostly marvelous, insightfully framed novel doesn’t deserve.