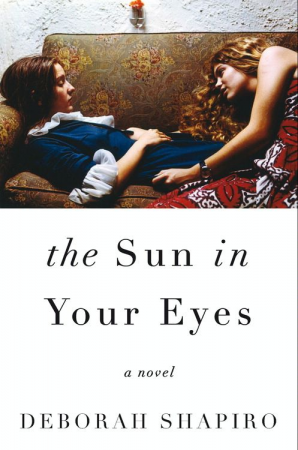 Lee is the attractive, consummately cool daughter of rock legend Jesse Parrish, who died under mysterious circumstances, and whose fame and folklore have defined her own life and self-image. Viv is Lee’s down-to-earth friend, who struggles in Lee’s shadow with identity issues of her own.

The two meet in college, where they share a roommate, Andy, who’s dazzled by Lee but ultimately marries Viv. For several years, the women are out of touch until Lee reappears, convincing Viv to take one last road trip, this time to find Lee’s father’s lost music tapes. This adventure, with numerous forays into the past, forms The Sun in Your Eyes’ plotline.

The insights into each woman and their relationship, fraught with secrets and deception, as well as love and support, is the central conceit of the novel. The friendship is characterized by periods of distance and envy, and the inevitable confusion over Andy’s loyalties.

Lee decides not to tell her newly pregnant friend that she’d aborted her own pregnancy by Andy many years before. Viv, struggling with settling into the role of wife and incipient motherhood, has an affair during the course of their road trip. One of the more refreshing aspects of the book is the way it avoids moralizing, presenting the women’s less-attractive qualities — such as envy and self-involvement — as humanizing rather than distancing. Lee and Viv are in the process of growing up, and the reader is allowed empathy for this process and their mistakes.

The Sun in Your Eyes is often flat-out funny, too, with a skewering wit and keen attention to the outer details and character flaws that shape the characters, particularly the late 1970s rock ‘n’ roll “community” of Lee’s parents.

Neither daughter is fully enamored of her parents. Lee’s flawed and narcissistic mother, Linda, describes to party guests — including her daughter — the sexual dream she had about her own father: “The thing is,” she said, “it was really good!”

Viv’s parents, solidly middle-class, embarrass and annoy her. Their conventional outlook is consistently contrasted with Linda’s outré yet sophisticated persona. Viv’s mother, criticizing her daughter’s unorthodox wedding venue, wonders, “What does one wear to a wedding in a foundry in Queens?” Linda, of course, gets it right, showing up “effortless and blasé” in trousers and a satin blazer. Viv notes: “It made me think. Right, this is what one wears to a wedding in a foundry.”

The world of the two friends — alternately less mythic and fraught (Lee), and less solid and settled (Viv) than that of their parents — is played out against these familial backdrops and found to be wanting. One of the novel’s key themes is the distance from the “adult” world of their parents and the protagonists’ somewhat adolescent confusion and insecurity: “It sometimes seemed to Lee that they were all engaged in a kind of generational cold war…Is that what their parents had wanted? For their children to live in their shadow?”

The storyline involving Jesse, the father Lee barely knew, ends dramatically, providing Lee with a difficult resolution that will nonetheless aid her in establishing her own “place in the sun.” Viv, too, learns something about her own needs and is finally reconciled with, and then delighted by, motherhood. While she initially worries that her love may not be unconditional, she quickly warms to her baby: “He broke my heart when he rested his little hand on my waist as I nursed him.”

The references to light and dark, sun and shadow permeate the book as each woman symbolically moves from the shadows into the sun of her own center stage. Readers will identify with the hard-won passage each makes toward accepting her own strengths and limitations, as well as that of their friendship. It’s a complex journey, but one a reader will want to make.

By Andrés Neuman; translated by Nick Caistor and Lorenza Garcia