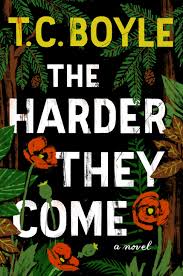 T.C. Boyle is a sly trickster, the sixth Marx brother, and a wise guy’s wise guy. His subversive novels and short-story collections have been appearing since 1979 and have made for some wildly mutated history and highly entertaining, transgressive fun.

This 15th novel (based on a true story) tackles violence, the police state, anti-immigrant paranoia, and the failure of mental-health care in America, while it alternates between the points of view of three characters belonging to three generations.

Sten Stenstrom (“Sten,” like the British WWII submachine gun) is a 70-year-old ex-Marine, Nam vet, retired high school principal, and uber authority figure for whom violence was once as kneejerk as riding a bike, but who has aged into a sort of Zen-like calm. Imagine Clint Eastwood morphing into David Carradine as “Grasshopper.”

His remaining hot trigger is ageism in a world of young faux warriors — whether it’s a cop, a thief, or a punk in a car. Most of the time, he’s moored at the rock that is his wife, Carolee (whose point of view could have been an interesting addition). And lately he’s been redefining himself as “old and befuddled.”

Sara is like most people who think they are radical with a capital “R,” until they encounter those who are a thousand times more radical, the true Free Radicals. And she’s small fry in the grand scheme of things — wanted for her failure to wear a seat belt, hand over her license and registration, having out-of-date plates, and breaking her dog out of the pound — seemingly more cook and mother than lover.

Adam (aka Colter) is Sten’s loose-cannon son, who idolizes 19th-century mountain man John Colter (for his rugged lifestyle and extraordinary escape from the Blackfoot tribe), and whose past altercations with the authorities include driving a car into a crowded playground because he thought the monkey bars were some sort of stylized alien spacecraft, and climbing a wall at the Chinese embassy in San Francisco to make peace with aliens that he imagines have arrived through some sort of portal.

Adam is mostly high, rarely sober, seldom speaks, shaves his head, and has established a series of refuge bunkers out in the hills where he farms a mini opium “plantation.” And while we initially root for Adam, once his “Chief Broom”/Ken Kesey-like hallucinations lead him to kill two of his neighbors, all bets are off.

The title gives a nod up to Jimmy Cliff’s song about social injustice, police brutality, and oppression. (Love that Sara’s Rasta dog, Kutya, has dreadlocks.) But the first section is a knuckleball about Sten and Carolee’s cruise to Costa Rica, where life gets real when Sten strangles a petty thief who is threatening a busload of senior tourists. His so-called heroics gain him unwanted celebrity status, phone calls from Hollywood, and second thoughts about American culture. His guilt foreshadows what lies ahead, though not the way you might expect.

Boyle always plays against expectations. After the adrenalin rush opening, you think Sten is the protagonist. Upon his return, he gets involved with a semi-vigilante group that roots out Mexican illegals. What could possibly go wrong?

But the novel shifts the moment Sten sells his mother-in-law’s house, where his son is still living. Adam breaks with reality and erupts. After trashing the place in an epic rampage, he encounters a family friend.

“‘What do you think you doing in there?’ the old guy says. ‘I think I’m getting away from assholes like you,’” Adam realizes he should have said. And then Adam shoots him.

Jane Kenyon puts it so aptly in her poem “Bright Sun After Heavy Snow”: “Astonishing how even a little violence eases the mind.”

Adam heads for the hills and a five-week-long manhunt ensues, reminiscent of Edward Abbey’s novel The Brave Cowboy (filmed as Lonely Are the Brave, starring Kirk Douglas). Boyle’s primo nature writing comes to the fore as Adam travels up the muddy old logging roads and canyons into wilderness areas near Ukiah and Willets, where cellphones don’t work.

The details are crisp and perfect. Adam is no Rambo, more a self-taught warrior who still manages to elude, confound, confuse, and humiliate the police, while Boyle skewers 24-hour news, the cult of personality, and reality TV along the way.

Few contemporary writers enjoy killing off their characters with the aplomb of T.C. Boyle. He knows how impossible it is to save anybody, let alone love them. Love is powerless against random violence, against mental illness. By now, it is clear that Adam will end badly and there’s nothing you, or I, or Sten, or Sara, or Carolee can do about it. There’s no refuge to be found, nowhere truly safe.

William T. Vollmann’s Rising Up and Rising Down, a 3,300-page, heavily illustrated, seven-volume treatise on violence, David Cronenberg’s 2005 film A History of Violence, Cormac McCarthy’s novels Blood Meridian, The Road, and No Country for Old Men, and even the third film in the Quatermass series (contagious violence destroyed life on Mars) come to mind as equivalent explorations of the unpredictable nature of fear and violence and the inevitability of death.

Sten is powerless to save his son. And we are left to witness the events as they unfold.

Fortunately, Boyle worries about the world and its problems so we don’t have to, and he writes it all down.

Richard Peabody is a Washington native who founded Gargoyle Magazine and Paycock Press back before Elvis died. He won the Beyond the Margins “Above and Beyond Award” for 2013. His forthcoming book is The Richard Peabody Reader.