A woman learns that her estranged father has committed suicide and returns to her hometown to make sense of what's left in his wake. 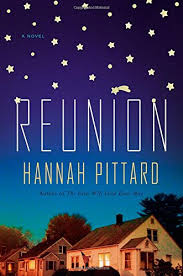 John Cheever’s short story "Reunion" has both haunted and delighted readers with its faster-than-light energy and melancholic tenor ever since it was first published by the New Yorker in 1962. The main character is Charlie, a boy who hasn’t seen his father since his parents divorced a few years before.

While on a stopover in New York to catch a train, Charlie arranges to have lunch with his father. Charlie’s father takes him to four different restaurants and one newsstand. Due to the obnoxious (but highly entertaining) way in which Charlie’s father behaves, they are asked to leave every establishment. And just like that, the lunch is over and the opportunity for real connection, emotion, and knowledge has been lost. Charlie never sees his father again.

The line that’s stayed with many a Cheever fan, “I knew that when I was grown I would have to plan my campaigns within his limitations.”

And so this epigraph is found on the opening page of Hannah Pittard’s new novel, Reunion. Pittard takes a noble risk here by bringing the reader’s attention to such a great story, as if to say, this is my tribute to John Cheever. But it works for one very important reason: Pittard’s main character, Kate Pulaski, is a stand-in for the grown-up Charlie we never get to know. And so finally, finally, generations of Cheever fans get the chance to understand what it really means to plan a campaign within the limitations of one’s father.

Kate Pulaski is a 34-year-old failed adult. She is overburdened by personal and student debts. With her measly film-professor salary, she would not be able to pay these were it not for the generosity of her husband, Peter. Her marriage to Peter, however, is in serious peril after she’s caught cheating on him. Why does she cheat? Because Peter wants to adopt a baby, and Kate can’t be honest about not wanting children.

Naturally, Kate has a past, and she has reasons for doing all that she does. She is the third child born to Stan Pulaski, after her brother, Elliot, and sister, Nell. When their mother died of cancer many years before, their father, Stan went on to get married four more times, having children with most of his new wives, seldom waiting for his divorce to come through before moving on to the next mistress/soon-to-be wife.

Nell and Elliot were grown up and had left the house by the time Stan married his third wife, but being the youngest, Kate had to endure wives number two, three, and four, and all of their children. As the years passed, Kate began to resent her father for his many broken families, but especially, for the emptiness and solitude she feels.

On the eve of Kate’s marital separation and financial ruin, she receives a call from her brother saying that their father has committed suicide. Now Kate must travel back to Atlanta and face her two siblings, her many half siblings, and all four of Stan’s former wives. What follows is a journey of unflinching self-recognition, a painful goodbye, and the opportunity for Kate to take responsibility for her life.

Readers will be charmed and intrigued by Stan’s fifth wife, Sasha, who steals every scene she’s in. Slightly younger than Kate, Sasha is the mother of Stan’s ninth child, Mindy. Throughout the novel, Sasha acts as the wise and mature counterbalance for Kate. Ultimately, she helps all Stan’s first-marriage children to better understand their father, and she becomes a figure of healing and acceptance.

Whereas Cheever’s "Reunion" leaves readers with a sublime sense of longing, Pittard’s Reunion begs us to introspect. How much can we blame parents for adult failures? How much can a bad childhood shape who we become in adulthood?

After all, Kate’s siblings Elliot and Nell are relatively well adapted, while Kate can’t help but compete with her younger half-siblings, and suffers from other strange compulsions, like pushing a dozen eggs off the counter so she’ll be able to go to the store and buy more (with someone else’s money, certainly).

But Kate is complex and well presented. Even as her selfishness made me cringe (she doesn’t seem to feel bad for cheating in her husband, nor does she have any feeling whatsoever about her father’s death), she attracts our sympathy because she longs for love and security. Despite her difficulty with emotional intelligence, she strives for self-knowledge. “There’s a really good chance that the message that’s been waiting inside of me to finally take shape is simple, life is hard.” In other words, she is trying.

Ultimately, Reunion sings because it succeeds on two fronts: The book is deeply character driven, and it holds a fascinating subplot in every chapter. I read this book in one day simply because I couldn’t set it down. If Hannah Pittard’s Reunion was meant as an intelligent and full-bodied conclusion to the exquisite vacuum left by John Cheever’s "Reunion," she has succeeded.

Dorothy Reno is a DC-based writer who’s been published by Red Tuque Books and is working on a collection of stories called The One That Got Away.

Though uneven, this story of personal and cultural trauma is not without its rewards.

The traditional manor-house mystery is turned on its head in this cheeky whodunit set in mid-20th-century Ireland.