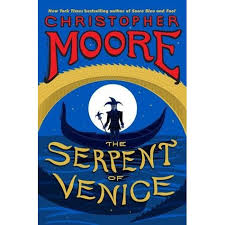 Probably not, because the Bard never wrote it. Imagine how much more fun AP Lit would’ve been if he had. Instead, this brilliant mash-up of The Merchant of Venice and Othello — with some King Lear and Poe’s “The Cask of Amontillado” thrown in for giggles — comes courtesy of Christopher Moore, whose The Serpent of Venice reads like something Shakespeare could’ve written, if only he’d had a proper IV-drug habit.

Set in Venice “a long, long time ago,” the story starts with Pocket of Dog Snogging (a.k.a. Lear’s fool and star of Moore’s hysterical earlier novel Fool) being plied with glass upon glass of a wine “which tastes a bit of pitch” by Iago, Antonio, and Montressor Brabantio, a band of villains determined to drag the city into a fabricated holy war while seizing control of its wealth and the Venetian Senate in the process.

The trio sees Pocket, still mourning the loss of his beloved Cordelia, as an irritating speed bump on their road to victory and decide he must be dispatched. Soon knocked out, walled up, and left for dead in the dank dungeon of Brabantio’s palazzo, the fool awakens to discover he’s not alone. Somewhere in the blackness, a dagger-clawed undersea minx emerges and proceeds to have her way with him. Repeatedly.

CHORUS: And so, chained in the dark, naked and bedeviled by a hellish creature unknown, after five changings of the tide, the fool went mad.

CHORUS: Fear did twist the jester’s tiny mind — stretch it past the limits of sanity until it snapped — and shivering and pale, he went mad.

I am not bloody mad, you berk!

CHORUS: You’re shouting at a disembodied voice in the dark.

Happily for Pocket, Viv turns out to be a scaly whore with a heart of gold (at least in her dealings with him). And before he can say, “I’ve just been rogered six ways to Sunday by a Gorgon,” Pocket finds himself released from bondage and washed ashore on La Giudecca, a small island separated from Venice by a wide waterway, where Shylock’s daughter, Jessica, takes pity on the half-drowned harlequin and helps him recover.

What follows is an exquisitely raunchy, occasionally bloody series of twists and turns in which Pocket seeks to avenge Cordelia; Jessica plots to sneak off with Lorenzo; Iago conspires to topple Othello; Shylock demands his pound of flesh; Antonio secretly pines for Bassanio (who openly pines for Portia); Marco Polo (Marco Polo?) hopes to escape a Genoan prison cell; and Viv just wants to be held.

(If you’re rolling your eyes at the absurdity of all this and can’t loosen up enough to enjoy the ride, take a moment to consider why nobody ever sits with you at lunch.)

It gives nothing away to reveal that, as in Moore’s other laugh-out-loud-funny novels — the superb Lamb, A Dirty Job, and the aforementioned Fool among them — the good guys in The Serpent of Venice mostly triumph, the bad guys mostly don’t, and almost everyone ends up bedding somebody (or something). The beauty of this latest work is that it doesn’t just throw Shakespeare’s plotlines into the scrum. It throws his characters in, too.

In other words, don’t assume each player will stay true to form. Is Othello still a jealousy-fueled murderer? Is Shylock obsessed with revenge? Does Antonio conduct business honorably? Will Desdemona remain loyal to the Moor? Are Portia and Nerissa still heavy into cross-dressing? You’ll have to read the book to find out.

“Iago rose and went to Bassanio, offered his hand. ‘Then you’re the one we need to speak with.’ He led Bassanio to the table as if leading a lady to the dance floor. Over his shoulder, he said, ‘The rest of you can fuck off now.’”

Okay, so that’s a tiny spoiler. Iago is still a wanker.

Holly Smith is managing editor of the Washington Independent Review of Books. She was forced to memorize Shakespeare’s “Friends, Romans, Countrymen” speech in 10th grade and still has a limp.