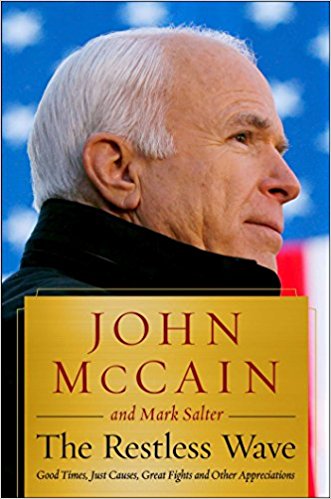 Staring down one’s mortality has a way of sharpening focus. We’ve all heard stories recounting deathbed reassessments of choices made, of stinging regrets, and of the urgency to make amends while there’s still time.

And though it’s true that John McCain produced this book under the ticking clock of a brain cancer diagnosis, the reader senses it’s not significantly different than if he’d written it in the pink of health.

McCain fully owns both his failures and his successes, makes no excuses, and begs no forgiveness. He uses this book to record his version of crucial events of the last 20 or so years, but also, as he says, “I want to talk to my fellow Americans a little more if I may.”

It’s worth considering what he has to say. He may side-step some issues, and no one writes a memoir to make themselves look bad, but it’s hard to argue that he is not sincerely considering what’s in the best interests of Americans as citizens of the world.

This is the seventh book that McCain has co-authored with his longtime assistant, Mark Salter, which is perhaps how they were able to pull it together so quickly. While they spend time dissecting McCain’s defeat in the 2008 presidential race — explaining how he was argued out of choosing his good friend Joe Lieberman as his running mate, while never once impugning Sarah Palin — most of the book focuses on the U.S. involvement in the various conflicts in Iraq, Afghanistan, and Syria; foreign relations with the likes of Vladimir Putin and Xi Jinping; and the urgent need to focus on human rights both worldwide and at home.

As chairman of the Senate Armed Services Committee, McCain travels widely and frequently. He tries to make all trips bipartisan and uses the time and forced closeness to build personal relationships across the aisle. He makes the effort to see for himself the conditions on the ground in places both widely known and obscure so that he can speak from a more deeply informed position.

He’s unafraid to remind foreign officials where their countries are falling short, particularly on human rights and political freedom, whether or not we consider those countries important to U.S. interests. It is rarely difficult to understand where McCain stands on any subject.

Consider, for example, the subject of torture — or, because no euphemism is oblique enough that we can’t make it more so by creating an acronym for it, EIT (enhanced interrogation techniques). Beyond his own personal experiences informing his feelings on the matter, anyone wondering about his unwillingness to support Gina Haspel’s nomination for CIA director because of her involvement in the EIT program, and her approval to destroy recorded evidence of EIT use, simply needs to read chapter three, “About Us.”

Easily the most chilling image in the book describes the torture of Fatima Belhaj, wife of Abdel Hakim Belhaj, a man who found himself on the wrong side of the U.S.’ short-lived reconciliation with Muammar Qaddafi:

“[CIA interrogators] had taken a photograph of her in the interrogation room at the black site in Bangkok. She was seated in a chair, Americans surrounding her, duct tape wrapped around the lower half of her face, her wrists bound, and completely naked. She was six months pregnant at the time.”

McCain’s fight against the use of torture and for the release of an unclassified report concerning the U.S.’ use of EIT is based on the concept that we are supposed to be better than this. “What makes us exceptional?...Our founding ideals and our fidelity to them at home and in our conduct in the world makes us exceptional…This was never about [terror suspects]. It was about us.”

At one point, he notes that his treatment from his captors in Hanoi was, in comparison, more humane than the perversions exhibited by American guards at Abu Ghraib.

All of this may seem odd coming from a reliable hawk, but McCain has a fully nuanced, well-sourced view of the proper application of force. He walks his readers through his thinking on all of the conflicts in which we’ve been involved (or failed to be involved) since the early 1990s.

He calls out what he sees as the significant foreign policy failures of the Obama Administration, most notably Syria, but allows that multiple administrations are responsible for the unchallenged rise of Vladimir Putin into the pantheon of the world’s great tyrants.

For those who may be wondering, The Restless Wave contains any number of thoughts on the wrong-headedness of the current administration. McCain worries that we are now actively working to abdicate our role in the world order we worked hard to create after World War II, and notes that our allies are increasingly learning to work around us or entirely without us, which should cause us concern.

There are a number of issues where McCain remains silent. While he goes into some detail to explain his thinking on the most recent healthcare vote — observers outside the Senate saw his thumbs-down gesture as more dramatic than it actually was — he remains silent on his vote with the entirety of the Senate Republican bloc on a tax plan that is widely understood to add $1 trillion to the national debt. That’s the agenda item I’d really like to hear his thinking on.

My respect for McCain was cemented when he pointedly refused to demonize his political opponent, Barack Obama, in the 2008 presidential race. As improbable as it may have been then, that sort of restraint seems positively quaint these days.

That McCain’s name continues to be invoked in the president’s ongoing campaign-style rallies as a sure way to prompt the boisterous crowds to boo is one of the more gob-smacking features of this most unpredictable of administrations. One longs to ask, “To what possible purpose?” but none of the likely answers are reassuring.

Professional politicians like John McCain are in increasingly short supply, and we are worse off because of it. We need people who grasp what “proper order” is and why it’s important, and are willing to explore good-faith bipartisan approaches to solving complex issues. We need members of Congress who understand that principled compromise is the way to get the people’s work done.

I miss him already.

Jennifer Bort Yacovissi’s debut novel, Up the Hill to Home, tells the story of four generations of a family in Washington, DC, from the Civil War to the Great Depression. Jenny is a member of PEN/America and the National Book Critics’ Circle, and writes a monthly column and reviews regularly for the Independent. She served as chair of the 2017 and 2018 Washington Writers Conference and is president of the Annapolis chapter of the Maryland Writers Association.