The Reckoning: Death and Intrigue in the Promised Land

Recounting the hunt for an anti-British terrorist in the closing days of Mandate Palestine. 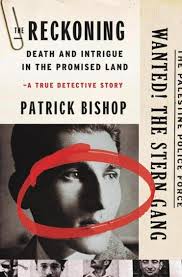 Most literature about the steps that took Mandate Palestine to its demise and Israel to its rise focuses on Zionist enterprise in Europe, the U.S., and Palestine. In such explorations, little attention is paid to the purpose and effectiveness of the Palestine Police Force as a primary agent of British rule. What’s fresh about Patrick Bishop’s The Reckoning is his decision to focus on the PPF. In the book, we see less of the usual gallery of Jewish heroes and more of the upper-level British governing establishment in Palestine.

Ultimately, it is an archetypal David and Goliath story. David, as the Jewish terrorist cop-killer (freedom fighter?) Avraham Stern, and Goliath portrayed by Geoffrey Morton, assistant superintendent of the Palestine Police Force. Morton is a rigid law-and-order man — a purist. In his own way, Stern is also a purist, his fanaticism more obvious and much closer to madness.

Bishop judiciously takes advantage of previously published writings while introducing newly discovered sources to sharpen his portrait of the times and the personalities battling over Israel. He creates complex depictions of his combatants, taking them back to their roots and up to the moment of ultimate confrontation.

For this reader, for all of their differences, both men shared the capacity for imagining a perfect self, and through role-playing becoming that idealized individual. Zionist Stern was far more flamboyant in dress and manner, but Morton had an edge to his conventionality. Neither respected shades of grey.

Spinning around these central figures are well-managed contextualizing treatments of the overall British mandate administration and the quagmire in which the promises of the Balfour Declaration butted heads with the need for Arab oil. The obvious Arab alliance with Nazi Germany was something Britain allowed to be colored by nostalgia for its disappearing colonial heritage and long relationship with Arab populations.

Bishop is also able to give an impactful sense of the Yishuv, the organizing Jewish community in Palestine, and its love-hate relationship with Stern. Major Jewish political forces in Palestine did not buy Stern’s assertion that the British were the real enemy of Zionism. Stern saw the policy of restraint following Arab attacks — in an attempt to win sympathy and favor in British and world opinion — as foolish.

Whether called the Stern Gang or the Stern Group, the Zionist leader’s insistence on terrorist tactics made him public enemy number one and wanted posters were everywhere. It was Morton’s job was to maintain law and order and put an end to the bombings and shootings of PPF personnel; an action for which Stern was happy to take credit.

In this tale, of which we know the outcome — Stern dies at the hands (bullets) of Morton — it is still possible to build suspense.

Bishop manages this, in part, by creating a sense of the events happening now. He provides a wealth of precise, vivid detail that bridges the distance between the 1940s and today. He emphasizes what’s at stake for each man, and alternates between points of view. The emotional story of each contestant is interrupted by that of his counterpart, allowing suspense-building delay before returning to the other perspective.

Like any good journalist, Bishop has occasion to weigh contradictory evidence. Sometimes, this is a matter of evaluating written or recorded testimony. How do you measure a statement from many decades back against a more recent one? What does “consider the source” really mean?

Case in point: Just what did happen in the final minutes of Stern’s life? Did Morton shoot him in cold blood? Did he shoot him to prevent Stern from escaping? Did Stern resist arrest in order to die a martyr?

Witness memories and testimonies vary. With Bishop’s guidance, we test the logic of the statements in terms of other things we know about the conditions and the actors. We wonder about the motives for a suspect, the details of the action, and information withheld. Sifting through such variations and lacunae has its own strong attraction and suspense.

Morton had a much longer life than did the man he shot. In following Morton’s diminished career and considering his way of dealing with his shrinking importance, Bishop suggests a kind of posthumous victory for Stern. In fact, it did not take long for Stern’s position to gain strength after his death, leading to the Mandate’s end in 1948. In 1978, an Israeli postage stamp was issued in Stern’s honor. Three years later, a town was named after him.

Patrick Bishop has given us a sturdy, lucid, and highly colorful look at the no-win situation of British governance during the closing years of the Palestine Mandate. His book reads like a thriller, with the added attraction of providing a compelling account of how history unfolds and memory is shaped.