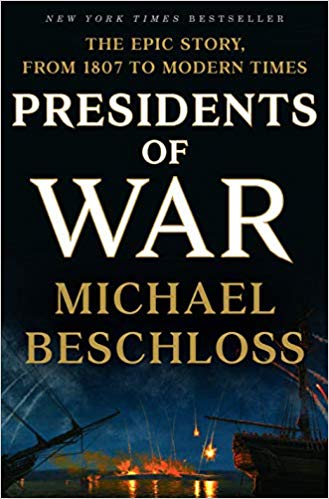 Since the election of 2016, popular historians and biographers have written books about our current political struggles as a divided nation. David McCullough, Jon Meacham, and Doris Kearns Goodwin, among others, have all weighed in on this issue in a variety of ways.

Now added to this particular canon is presidential historian Michael Beschloss, who puts an original spin on the genre. In his familiar, breezy way, Beschloss offers the thesis that, since the Constitution was ratified, American presidents have obfuscated the Founders’ view of the powers of war. It is a pattern that has repeated itself with every conflict since the War of 1812, and it’s one that continues today.

The Framers specifically gave Congress, not the executive branch, the power to declare war. They believed concentrated power in the hands of one individual was what had led the monarchs of Europe into repeated warfare. Thus, the system of checks and balances was intended to provoke discussion with a deliberative body of individuals before any decision was taken to enter armed conflict.

Yet, time and time again, presidents have expanded the power of their office during wartime. The author is quick to note that Congress has not declared war since 1941, even though American service personnel have been put in harm’s way many times since then, most notably in Korea and Vietnam.

Readers who grew up in the 1950s, 1960s, and 1970s are old enough to recall the various public debates over troops being deployed without congressional mandate. In Korea, the argument was made by the Truman Administration that no declaration of war was needed since we were “technically” fighting under the flag of the United Nations.

A more vigorous opposition to presidential use of the role of commander-in-chief emerged during the Vietnam War under Johnson and Nixon. The chapters on Truman, Johnson, and Nixon bring back those eras with great immediacy, but readers familiar with the arguments made at the time can skip this material without missing much.

It’s really Beschloss’ analysis of the pre-20th-century presidents that piques readers’ interest, particularly the presidency of James K. Polk, who was responsible for waging an offensive war against Mexico (1845-1848), with the goal of territorial conquest.

Despite this, many Americans have felt self-satisfied with the myth that America only fights in self-defense, as with William McKinley’s war against Spain in 1898, when the USS Maine was allegedly blown up in Havana Harbor, or when the United States was attacked by Japan at Pearl Harbor in 1941.

Woodrow Wilson put Americans into the combat zone during World War I in an effort to “make the world safe for democracy” and to be the “war to end all wars,” while Truman, Johnson, and Nixon fought to keep the United States and arguably the rest of the world free from Communism.

While Beschloss castigates Presidents Madison, McKinley, Wilson, Franklin Roosevelt, Truman, Johnson, and Nixon for various missteps, he has particular ire for Polk, claiming he fed the mania of “Manifest Destiny” in the 1840s.

“Just half a century into the life of the American Republic,” he argues, “Polk had crushed the Founders’ hope that their fresh new country would not indulge in the Old World monarchs' habit of manufacturing false pretexts for wars they sought for other, more secret reasons.”

Beschloss argues that Polk’s land grab was egregious and that his approach to Congress and the American people was a “hasty, roughneck approach — and his awareness that he would only have four years as President to achieve his aims — kept him from making a serious, extended effort to discover the new lands might have been obtained without a major, bloody war, which should have been his last resort.” Polk had pledged to be a one-term president and ran on a platform of territorial expansion.

Like many biographers and historians, Beschloss gives Abraham Lincoln a pass on waging the Civil War, making it clear that this conflict was an entirely different kettle of fish than the foreign wars.

For Lincoln, it was paramount to preserve the Union; he employed whatever tactics necessary to accomplish that goal. Thus, Lincoln craftily skirted congressional involvement and waged the war as he saw fit. Yes, he flouted the Constitution by limiting civil liberties (most specifically, the writ of habeus corpus), but he always took a broader view in his belief that the United States was “the last best hope of earth.”

Anyone interested in wartime history will enjoy this book, even if it’s a little light on discussions of military strategy and tactics. The author sets out to examine the role of the commander-in-chief in relation to the American people and offers a good read while making prescient observations that are more than timely.

James A. Percoco is the history chair at LSG: The School for Advanced Studies in Ashburn, Virginia, and is the author of Summers with Lincoln: Looking for the Man in the Monuments (Fordham, 2008).

The President Will See You Now: My Stories and Lessons from Ronald Reagan’s Final Years

A worshipful ode to the Gipper from his private secretary