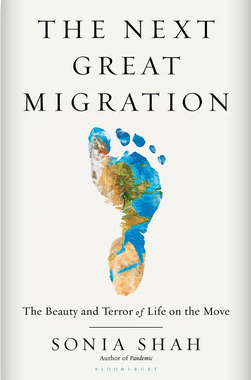 Sonia Shah’s scientific and literary prowess can be felt in the way she dissects xenophobia as a crude immune response:

“Fever is an ancient, primitive, and nonspecific immune defense that we share with almost every other vertebrate and even some invertebrates. In some cases, it can help reduce the replication of microbial intruders. The body detects the presence of a microbial outsider, and blood rushes to its core, kicking the immune system into action and creating a hostile, scorching hot atmosphere for the intruder. But at the same time, the heat stress destroys the body’s own tissues. Sometimes what began as an immune defense turns into a self-destructive reaction, leading to seizures, delirium, and collapse. Xenophobic reactions are similarly primitive, nonspecific, and potentially self-destructive.”

It’s a nuanced idea with exacting detail that still maintains the pacing of a bullet train. This style is what makes Shah’s new book, The Next Great Migration: The Beauty and Terror of Life on the Move, so compelling. Readers initially drawn to her in-depth and meditative look at the nature of migration will stay for her storytelling.

While it has a few blind spots, The Next Great Migration convincingly argues that the constant movement of plants, animals, and people from one place to another is natural and signals health. Chapter by chapter, the author debunks the centuries-old ethos that most living things come from one stagnant habitat, and that moving to a new place is a rare and often extreme change brought about by dire circumstances.

It is also a global book, too. It crisscrosses the planet, following lemmings in Norway, visiting modern refugee camps in Greece, and tracing the sailing paths of Polynesian explorers, among many other stops.

Shah dissects why living things move and their impact on the environment once they do so. Along the way, she methodically dismantles harmful ideas, including that human migrants bring disease and crime. Using DNA evidence, a close study of history, and a plethora of other research, the book also explains how humans have always been migratory and that the hierarchical division of “who belongs where” was specifically built to uphold Euro-centric supremacy.

Some of the men who helped build the framework of this hierarchy include Carl Linnaeus, Aldo Leopold, and Paul Ehrlich. Linnaeus was the 18th-century father of taxonomy. He helped cement the idea that people, plants, and animals were from specific locations and specific locations only, thus upholding the status quo of that time.

The other two thinkers would disagree with Linnaeus, but there are, nevertheless, elements of his implicit bias in their work. Wildlife ecologist Leopold emphasized the importance of native over non-native or invasive species. He suggested that species collapse when their populations grow too large, as he saw happen with the mule deer of the American West. Ehrlich, in his book The Population Bomb, linked this idea of species collapse with his projection that humans are nearing a breaking point.

Shah, for her part, argues that the concepts of “invasive” and “native” and a “population explosion” have deep roots in anti-migration sentiments. As a reader deeply moved by Leopold’s essay collection A Sand County Almanac, I was disturbed by her analysis.

While the author’s explanation makes sense, it also glosses over the mass eradication of predators and indigenous people by European settlers in the United States, which brought about drastic alterations in the landscape. Leopold doesn’t address eradication perfectly, but he does address it.

Another issue is that Shah does not discuss indigenous communities and the destructive impact of some invasive species. She also fails to consider how the impact of invasive species has drastically deepened due to the speed at which we move around the world in the modern era.

Some of these newly arrived species are transforming landscapes faster and often for the worse, destroying watersheds and killing off more vulnerable species, among other consequences. Shah mentions some of these species, such as the zebra mussels and lampreys in the Great Lakes, but often does so in passing.

The Population Bomb, like A Sand County Almanac, was once a darling in environmental circles; even Jane Goodall mentions it in her writing. Shah’s critique of Ehrlich’s work as ethnocentric helped me understand that there is still a problem with white supremacy among environmentalists, and how that bias trickles into the science and the language we use to understand environmentalism. Shah’s ability to make me question the notions I once viewed as gospel is useful in 2020, when coronavirus and the systemic inequality it exposed has sent the world into a spiral.

As I write this review, many of the undocumented young men and women who came to the United States as children await a Supreme Court decision that will determine whether they get to stay in the country they call home. As a community, and perhaps as a species, we humans will have to adjust our perceptions of “who belongs where” and “who gets to go where,” and Sonia Shah’s The Next Great Migration is the right place to start the conversation.

[Editor’s note: On June 18, 2020, the Supreme Court ruled that undocumented immigrants brought to the U.S. as minors have the right to remain in the United States, at least for now.]