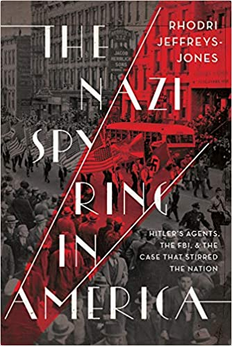 “I’m afraid most of the characters in my book are liars,” Rhodri Jeffreys-Jones said apologetically in a recent talk about The Nazi Spy Ring in America. An emeritus professor of history at the University of Edinburgh, Jeffreys-Jones tells an uncharacteristic kind of spy story, where some Nazis are amateurish, and some FBI straight-shooters are inveterate yarn-spinners.

The cast is vivid. Take Jessie Jordan, a half-German amateur spy in Scotland who turns hairdresser and mail-forwarder of spy papers in sleepy Dundee, on the North Sea. We learn that Jordan “was a voracious reader of crime stories and spy thrillers” and that she carried herself with a proud and charismatic panache. The author follows Jordan setting up her shop and mapping defense facilities on the North Sea coast, and recounts the suspicions she raised with MI5, the British intelligence agency.

The Brits tipped off the FBI about the mail Jordan was forwarding: Hitler’s agents in the U.S. planned to steal infrastructure secrets in America. When J. Edgar Hoover finds out, he assigns his best investigator, Leon Turrou, to the case.

The tale he uncovered splashed across American newspapers’ front pages in 1938. Yet few today remember that there was ever a big trial of Nazi spies that helped nudge the U.S. off the fence of neutrality between the two sides squaring off for World War II. That June, a grand jury issued 18 indictments of espionage. Nine defendants were abroad, beyond the FBI’s reach.

That “liar” label encompasses not just the spies — the four who were convicted in the trial, and the others who fled — but also their antagonist, the FBI’s star agent. An émigré of the world originally from Belarus, Turrou had a secret weapon: a facility for languages nobody suspected him of speaking. (It’s like he was a mind reader when he overheard a few words in Polish and used the information to quickly track down an escaped federal prisoner in Chicago.)

Turrou had the gift of gaining the trust of people who had no reason to trust him and getting them to incriminate themselves, basically writing their own prison sentences.

The Nazi Spy Ring in America brings many scenes to life with novelistic detail, like the relationship between German spy Willy Lonkowski and his alcoholic wife, Gunny. When Willy went missing while delivering a package of secrets to a contact on a steamship, Gunny “feared the worst and expected federal agents to appear any minute. She fled to her nearby sister’s place. In an attempt to raise immediate funds, she tried to sell her sister the Nash sedan.” We also get a granular physical description of Turrou from the FBI’s examining physician.

The author lays out the story with the pace of a procedural and the perspective of an historian. His scale expands by turns, from the spies to the FBI to the repercussions for national security. In earlier books, too, Jeffreys-Jones has tackled episodes involving the FBI’s and the CIA’s histories. Here, he shows the blind spots left when Hoover swiveled the public spotlight toward his agency’s triumphs.

While Hoover was touting his success catching Nazis, his agency was flailing in the international seas and missing the whale: Soviet intelligence. From the early 1930s, Stalin had targeted the snagging of secrets about U.S. aviation technology. Jeffreys-Jones writes that “because Hoover opted for the easier task of persecuting radical minorities, the FBI remained blind to and even complacent about more serious threats,” including a murderous Soviet regime.

Hoover grew jealous when Turrou basked in the media spotlight. The day the spy indictments came out, Turrou resigned from the FBI and sold his G-man story to the New York Post for a princely sum. In response, Hoover slammed the door on any future career Turrou might want in law enforcement, and ended Turrou’s association with the FBI “with prejudice.”

The spy-ring story, centered on a star FBI agent who accomplishes his mission and then falls out of favor, was ready-made for Hollywood. Exiled from the agency, Turrou went on to write and give speeches against the Nazi threat to an America reluctant to get involved.

The author argues that the Nazi spy trial of 1938 was even more important in swaying U.S. public opinion to abandon neutrality than high-profile international events that year, including Hitler’s pogrom known as Kristallnacht. In late November, six weeks after the trial started, the jury delivered guilty verdicts to three defendants. (The fourth, Gustave Rumrich, pleaded guilty.) Days later, the judge issued prison sentences ranging from two to six years.

Headlines about the trial shocked the public with the extent of Nazi subterfuge in its midst. By 1939, American opinion of Germany had soured. “If you join the dots,” writes Jeffreys-Jones, the spy trial leads to the U.S. joining the Allies against a tide of isolationist feeling and America First-ers.

Rhodri Jeffreys-Jones has assembled here an impressive raft of new material through Freedom of Information requests and research at the U.S. National Archives. His writing is not always nimble, and sequences can be confusing. Some passages feel stilted, and we lose main characters for long stretches. But his storytelling instincts are strong, and it’s quite a tale. The real-life characters live and stray far beyond the conventions of spy novels, revealing a usually hidden cross-section of society mired in misdirection and ego at every turn.

David A. Taylor’s nonfiction books include Soul of a People, about the WPA writers of the 1930s, and Cork Wars: Intrigue and Industry in World War II, which received an Independent Publishers Book Award for world history. His fiction collection, Success: Stories, was a People’s Choice finalist in the Library of Virginia Literary Awards. He teaches in the Johns Hopkins Science Writing Program and at the Writer’s Center in Bethesda, MD.