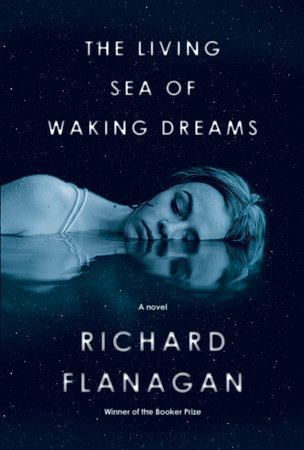 The job of a reviewer is to critique the book that has been written — that is, to interrogate what the author was attempting to achieve and then to assess whether he (in this instance) has been successful — not to complain that it wasn’t the book the reviewer wanted.

Still, I found myself thinking there are so many potential books inside The Living Sea of Waking Dreams that I wish Richard Flanagan had written. Instead, we have the one he chose to write, which I feel does not achieve his desired outcome.

Flanagan, who was born and raised in Tasmania, is inarguably the best known, most prolific, and most celebrated living Australian author. Of his now eight novels, he is best known for the 2014 Man Booker Prize-winning The Narrow Road to the Deep North, but virtually all of them have met with wide acclaim. This new one is racking up the accolades, too, but I must demur.

The Living Sea of Waking Dreams, with its pervasive sense of slowly unfolding doom, is a book about vanishing — not just figuratively and literally, but also in an oddly liminal space between the two. Flanagan’s story focuses on the already diminished Tasmanian family of Tommy, Anna, and Terzo, three siblings whose father, Horrie, and brother Ronnie have already died, and whose mother, Francie, is dying by centimeters.

Francie is entirely ready to slip these mortal bonds; unfortunately, Anna and Terzo — the two who live on the mainland and swoop in every so often to issue edicts to Tommy, their mother’s caregiver — are intent on forcing her to stay:

“Tommy’s idea of accepting death felt weak and spineless next to Terzo’s mad, cruel and hateful love…Because anything was better than death…If to live it took Francie working as hard as an Olympic gold medalist to get the whole twenty-one pills down every day, well, that was what it took. If it took living like a dog, well, was that not still living? And, after all, wasn’t living preferable to dying?”

While this family drama is playing out, massive wildfires are ravaging Australia, and the fallout of smoke and ash are covering Hobart and the rest of Tasmania. Entire species of animals are disappearing into the flames.

The story unspools through the eyes of Anna, a successful architect whose busyness through the years has prevented her from paying much attention to her son, Gus, who is now grown and rarely emerges from his bedroom except to steal things from her. Any bond between the two has vanished, and it’s unclear that she has gained anything in the trade-off.

Instead, when faced with the dispiriting prospect of her dying mother or the specter of the wildfire devastation or the thought of Gus, Anna disappears into Instagram and Facebook. “She wanted to post something cheerful she took a photo of her feet in the new sandals she had bought at Sydney Airport. New shoes! she wrote. Oceans were warming at the rate of five atom bombs a second.”

Through all of this, Anna is also working to ignore the disappearance of various parts of her body: first a finger, then a knee, a breast, an entire hand. The missing parts are blurred out in the manner of a perp’s face in a reality cop show. No one else seems to notice except Francie, who is living in a world of medically induced hallucinations. Eventually, Anna realizes other people are missing parts, as well, though their loss goes unremarked upon:

“And so her life was to go on as it ever had. Parts of her would go missing and no one, not even doctors, would ever notice. And if no one noticed did anyone care? And if no one cared why should she?”

Unfortunately, Flanagan prompts that same question in his reader. The author is urgent in his desire to get his readers to grasp — to notice — the climate catastrophe that is unfolding before our eyes, if only our eyes weren’t glued to our phones. That urgency translates into an unsubtle, hectoring repetitiveness that undermines his message.

He could have told this story in far more effective and affecting ways. Instead of Anna, we could have seen through the eyes of a younger Francie — forced by culture and circumstances into a pre-determined role, but who grew up in a natural world that’s quickly disappearing — as she aged and eventually vanished into her waking dreams.

Flanagan, whose perfection in detail is as magical as ever, makes us yearn to spend more time with her, this woman who understands calculus and wishes she’d been taught how to service her own car, rather than being saddled with the drudgery of keeping house and raising children:

“No one sang of it, no one celebrated it, no one respected it. Francie did all of it, agreed with none of it, and preferred simply to get on with it. But once, Anna overheard her and the Tiger [Francie’s mother] speaking about women, voices strangely low and gravelly, a muted music of rage she never forgot.”

It is abundantly clear that Flanagan is raising the alarm over the ravages already wrought by climate change and our willingness to ignore them; he ends with a note about the near-extinction of Tasmania’s orange-bellied parrot. Even if he’s preaching to the converted, though, this is not the book to shake readers into looking up from their screens.