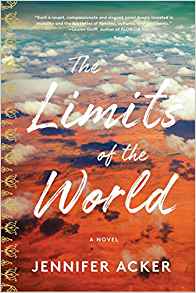 In her debut novel, Jennifer Acker asks us to consider the limits of the world. It is a powerful and daunting question and, like all good novelists, she leaves it largely unanswered.

Yet, having posed it, she creates a fictional atmosphere in which the interconnected, globalized world serves as the backdrop to an intimate domestic space in which a family grapples with what it means to belong.

The Chandaria family, emigrants from the Indian enclave of Nairobi, are not close with one another, and they don’t really belong to any specific place. For the most part, they are outsiders.

Husband and wife Premchand and Urmila reside in Columbus, Ohio: He is a physician, and she is a shopkeeper selling merchandise from her African homeland. Their son, Sunil, lives in Boston, where he is struggling to write his philosophy dissertation.

Premchand, an ambitious workaholic, has never established an emotional bond with either his wife or his son. Perhaps as a result, Urmila is both adrift and overbearing. And Sunil, having given up the career in science that his father wished him to pursue, is at loose ends and going through a professional and personal crisis.

Of course, there is a family secret: Bimal. He is the biological son of Urmila and Premchand, adopted and raised by an aunt and uncle and thought by Sunil to be his cousin. But this secret is revealed early in the novel when Bimal is hospitalized and the truth comes out. Eventually, the whole Chandaria family travels to Kenya to be at Bimal’s bedside and to deal with the aftermath of the deception.

The complexity of the novel lies in how Acker skillfully reveals the various ways that we can feel invisible: personally, culturally, geographically, and historically. Sunil and Urmila feel unseen by Premchand. Sunil’s new wife and his mother feel invisible to each other.

In order not to be left unseen and unheard, Urmila’s elderly father orates the history of his people in passages woven throughout the narrative that add an important and engrossing dimension to this saga, his quiet, colloquial voice creating lyrical interludes in an otherwise straightforward tale:

“The Jain universe is shaped like a man. We live in the waist, where there are many oceans and continents, between the sixteen heavens and seven hells. Each of us hopes to be reborn into a better life, but only if our karma has been good. With each cycle, we try again to attain liberation. Only when we have truly been emancipated do our souls float up and rest at the very top heave, crescent-shaped like a new moon.”

At the core of this notion of “belonging” are Nairobi and a mother-son relationship. Urmila’s struggles are many. She struggles to keep her shop, a “safari fantasyland where exotic adventures could happen,” afloat. She struggles with the loneliness of being married to a husband who was “such poor company, walking around in his own silent world like an astronaut in a bubble suit.” She struggles with motherhood and with understanding her own history and roots.

Sunil struggles with moral truths existing in a secular mindset. He struggles with writing and how to separate his authorial ideas from the real person living an ordinary life. He struggles with his parents’ relationship, his newfound brother, and his own identity as an African Indian born and raised in America.

The idea of place is central to the novel and is its strength. Not surprisingly, Acker (editor-in-chief of the Common, a literary journal about place) excels at using setting to enhance our understanding of the Chandaria family. Her writing about place is not only lovely, but also suggestive of deeper psychological states.

Whether we are in a tiny Boston apartment, a house in suburban Ohio, on the streets of Nairobi, or in the house-turned-museum of a famous writer, we are acutely aware of the influence of our surroundings on our being. I wished for more of this: nuanced and imaginative sentences — rather than dialogue and summary — that lead readers to gradual revelations.

There is quite a lot going on in this book. To Acker’s credit, she doesn’t let it get out of hand. At times, however, the energy is drained, especially in the long sections concerning Sunil’s philosophical musings. Yet we do begin to be charmed by him and cheer him on — hoping he’ll find resolution and contentment. Because what he learns in Nairobi is not what he expects:

“And the one truth he had found here so far, he was sad to realize, was loneliness. Bapuji alone inside his aged memories; his father’s desire to escape to the New World, his mother admitting how little she knew about her own parents.”

What he will make of it all keeps us reading.

I suspect that Jennifer Acker is an emerging novelist to keep an eye on, one in conversation with writers like Anne Tyler, Alice Munro, and Tessa Hadley. One who is paying close attention to the ways in which we manage to live, love, and transcend the limits of the world.

Holly Sneeringer has an MFA from Goucher College, as well as an MS in professional writing from Towson University. Her work has appeared in various places, including the Gettysburg Review, the Los Angeles Review, and the St. Ann’s Review, and has been the recipient of A Room of Her Own Foundation’s Orlando Award and Goucher College’s Chris White Award. She has taught writing at Towson University and the University of Maryland, Baltimore County (UMBC).

An intrepid — and flawed — biologist sounds the alarm about looming environmental catastrophe in the Gulf of Alaska.