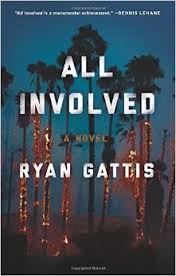 All Involved, a novel set during the 1992 Los Angeles riots set off by the Rodney King trial verdict, arrives in the wake of a spate of violent incidents between police and African Americans in Ferguson, Cleveland, Staten Island, and elsewhere. The country is in the midst of a perennial dialogue about racism and police power following these highly publicized killings of young unarmed black men that is almost identical to that spurred by the brutal beating of King more than two decades ago.

The attack on King was captured on video and shocked the world. A year later, when a jury acquitted the officers involved in the beating, Los Angeles went up in flames with six days of violence and rioting. Any novel taking place during that time period is going to raise expectations of helping examine and explain the socioeconomic and racial undertones that still persist today that lead not only to tragic confrontations between police and African Americans, but also to a judicial system that inevitably seems to tilt in the favor of law enforcement. Unfortunately, All Involved does not rise to that challenge.

It may be unfair to the novel to assign it such lofty goals, particularly if that was not the intention of the author. However, the title and the ambitious nature of the book suggest that the reader might not be blamed for hoping for such insight. All Involved has 17 different first-person narrators, each one giving a personal account of a few hours of those six days. Such breadth of voices implies that a kaleidoscopic and expansive view of those events will be forthcoming. Instead, we get a surprisingly narrow and episodic story that is missing this seemingly vital core.

The novel is a collection of linked pulp fiction stories set in the world of two competing groups of Latino gang members. Gattis does a very effective job of immersing the reader in the atmosphere of loyalty and retribution that drives these characters toward tragic confrontations that feel sadly inevitable. While the dozen or so gang-related narrators are differentiated, some are far more engaging than others, such as the teenaged lesbian who is out to avenge her brother. Her voice comes very early in the story and more than any other character makes the reader question Gattis’ decision to have so many narrators with one chapter each instead of honing in on a smaller set of the most compelling voices and letting them recur throughout the book.

Nearly all the narrators come from a group of Latino gang members and those in their orbit. There are only two African-American narrators, one of whom is a homeless man who wanders through the chaos around him, but serves very little purpose to the story. The other African American is not even given a name. He is a member of an unacknowledged unit from a shadowy federal agency sent to L.A. to maim and kill gang members who otherwise might escape justice.

Even if such a character has a basis in reality, though it certainly doesn’t feel that way in this novel, it surely would have served the book better to have the only law enforcement narrator be a member of the L.A.P.D., racist or otherwise. Similarly, the story is crying out for at least one African-American voice from the neighborhoods where the rioting actually took place, gang member or bystander.

Still, Gattis’ writing is spare and evocative, drawing us into a part of Los Angeles where the riots are viewed as nothing more than an opportunity to settle scores and create chaos while the police are otherwise occupied. When the broader distracting context of the King trial aftermath is ignored, it is easy to get drawn into the seamy and unpleasant details of these lost souls. Other nobler characters, including a nurse and a fire fighter, also have their moments to shine through with a poignancy that should have merited more space in the novel.

The fragments of All Involved do converge in the final narrative, focusing on a teenager and his father who are directly affected by the riots. Those final pages, a great short story in its own right, hint at what the novel might have been if Gattis had allowed those who were more than peripherally involved in the history around them to speak.

Michael Landweber is author of the novel We. His short stories have appeared in a variety of places, including Gargoyle, Fourteen Hills, Fugue, American Literary Review, Barrelhouse and Ardor. He is an associate editor at the Potomac Review.

An amazing, epic tale of rebooting the human race.