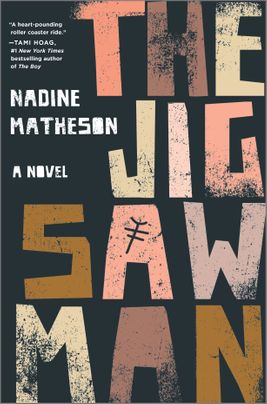 In her debut thriller, The Jigsaw Man, London criminal-defense attorney and author Nadine Matheson illuminates the legal system’s apathy toward murder victims from marginalized groups, as well as sexism and racism in law enforcement. Wanting to create a protagonist who looked like herself, Matheson’s hero is Detective Inspector Anjelica Henley, a Black woman who understands what it’s like to suffer from assumptions based on her skin color and her gender.

Henley has been on desk duty for the last 18 months, ever since Peter Olivier, the murderer dubbed the Jigsaw Killer, stabbed her during his arrest. Olivier’s infamous killing spree was in revenge against the soldiers he served with in the army — men who brutally raped him and were then exonerated of their crime. Olivier not only murdered his attackers; he dismembered their bodies and artfully arranged the resulting “puzzle” pieces.

Now, Henley’s supervisor calls her back into active duty when police find two more dismembered bodies bearing the Jigsaw Killer’s signature symbol carved into their skin. With Olivier in prison, it’s got to be the work of a copycat.

One of the new victims — a Black woman — reminds Henley of a young Black friend who'd been kidnapped and murdered as a teen. “The police didn’t bother, and the press didn’t bat an eyelid until a 15-year-old white girl went missing,” she recalls. Henley vows to pursue this recent victim’s killer. She won’t let the woman’s parents suffer the same police indifference her friend’s parents did.

As they find more mutilated bodies, Henley and her detective trainee, Salim Ramouter, must determine the connection between the victims and why the killer targeted them. The case proves daunting, and Henley knows she must question Olivier — even though the PTSD caused by his attack on her nearly two years ago already threatens to undo her.

Henley is a compelling protagonist, gritty yet refreshingly vulnerable. She presses forward while struggling to control the anxiety attacks that plague her. Her husband can’t come to grips with the danger of her work or the long hours her job requires. And worst of all, Henley misses her young daughter, who doesn’t get to see enough of her mother.

As the investigation becomes bloodier and more convoluted, Henley’s life spirals out of control. She prays she can catch the killer before he not only ends the lives of more victims but destroys hers, too.

Throughout this addictive story, author Matheson brings focus to the reality of “the less dead,” victims from communities of color or other marginalized groups whose cases aren’t vigorously pursued. Henley and Ramouter, both detectives of color, share “an inherent understanding that came from a lifetime of assumptions based on the colour of their skin. Henley had lost count of how many times she walked through the doors of New Scotland Yard, only to be stopped by some overzealous officer.” Over and over, they must prove themselves worthy to do their job.

In a world of violence and inequality, the search for justice takes on many forms. The Jigsaw Man is a riveting, deliciously creepy police procedural that not only entertains but conveys a message of equity and change. And from start to finish, Nadine Matheson paints a vivid portrait of London’s seamy side, showing readers “every nook and cranny of the Deptford area and…all the secrets that the river can spit out.”