The Jewish American Paradox: Embracing Choice in a Changing World 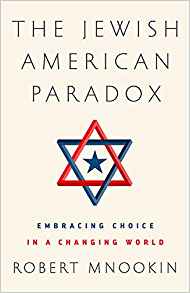 In The Jewish American Paradox, Robert Mnookin puts effective lawyerly reasoning and compelling personal experience to work in service of sketching the situation of 21st-century American Jews. He plays and wrestles with large questions regarding the elements of Jewish identity and how the power of these elements has changed over time.

The author launches his discussion with an attention-getting overview of “identity” illustrated by the life and work of identity’s master theorist, Jewish-born Erik Erikson. This strategy proves to be intellectually stimulating and colorful. Having grabbed the reader’s attention, Mnookin holds onto it with an accessible presentation about how to make both the “American Jewish community” and the various American Jewish communities thrive.

Among the many traditional components of Jewish identity probed by Mnookin are identification through matriarchal lineage, religious commitment, and the racial — or “Jewish blood” — concept. He probes deeply into each, testing its utility for a vibrant Jewish future.

Mnookin finds most of the identity elements restrictive and therefore limiting. Can one have a Jewish life without Jewish knowledge? Without Jewish DNA (if there is such a thing)? Without ascribing to behaviors (both dos and don’ts) provided in holy scripture and authoritative commentaries?

Mnookin argues for inclusiveness, and his arguments are well shaped and compelling. He is more comfortable with notions like nationhood or peoplehood, in part because such concepts have malleable borders.

Though Mnookin in some ways respects Orthodoxy, he sees its insularity as a problem. He is not fond of gatekeepers and doesn’t want negative assessments or litmus tests on the model of “she’s not really Jewish because (of one shortcoming or another).”

In the 20th century, an important component of Jewish identity became identification with Israel. Undoubtedly, this factor continues to have great importance. However, as Mnookin points out, the overwhelming power of Orthodox political parties and government officials is anti-inclusive. Life-cycle events that reflect Jewish identity are under strict control. Religious streams other than the Orthodox are not sanctioned as truly Jewish. Israelis, for the most part, are either Orthodox or secular.

This, for Mnookin, is not a model to be encouraged. America, at its best, is built on inclusiveness. Israel, for more and more Jews (and others), does not measure up. Identification with Israel is threatened by the Orthodox stranglehold on defining who is a Jew.

Moreover, many Jews who are otherwise committed to Israel cannot accept the country’s policies regarding settlements. They see Israel as the villain undermining a two-state solution — or any solution.

It is difficult to imagine Israel changing its policies to satisfy diaspora Jewish communities, but some measure of accommodation would seem necessary to assure this crucial identity factor. Key chapters in the book include those that ask such questions as: “Who Is a Jew in [21st-century] America?” and “Can We Survive Acceptance?”

As he turns toward his conclusions, Mnookin explores “The Challenge of Intermarriage” and the connected topic of “Raising a Jewish Child.”

Each chapter continues to underscore the necessity of fostering and achieving inclusiveness. Mnookin provides a lot of information and opinion derived from surveys that attempt to measure the pulse of Jewish identity. His analyses and projections based on these surveys are particularly useful in gauging trends that Jewish leaders need to understand and build upon.

Indeed, on all the issues that he pursues, the author goes far beyond the stage of worrying. His pages are filled with common-sense suggestions, and the extensive chapter notes open windows for further contemplation.

Mnookin’s presentation of his personal Jewish journey is a significant aspect of this book. He gives firsthand accounts of how severe criteria for tribal membership undermine a desired sense of Jewish cohesiveness. Why does an individual have to touch all the bases to have a home-run Jewish life? He also explores the power of the potentially fruitful criterion of Jewish self-anointment.

Perhaps individual Jews and branded Jewish communities (of faith and other bonding elements) need to stop grading one another. Such authenticity rankings only serve the end of exclusion. Though many will deny it, there is a richness, a vibrancy, in picking and choosing what speaks to you as a Jew, sharing your enthusiasm, and respecting/accepting those who grow their Jewish identities differently.