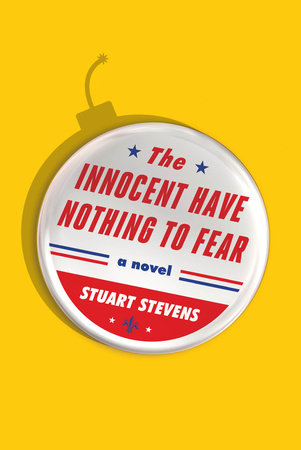 Stuart Stevens, your book is crazy, but it’s not crazy enough to be true. (Famed Danish physicist Niels Bohr once said something like that.)

All right, so Bohr was talking about a nonlinear field theory of elementary particles, not today’s American politics, though it might be as complicated. But after reading The Innocent Have Nothing to Fear, Stevens’ psychotically entertaining and eerily on-target new novel of U.S. presidential politics in a not-so-distant future, I feel the need to, in the words of a certain current presidential candidate, grab him by the lapels, rough him up, demanding, “You wrote this over a year ago. How did you know? How is it that your work of fiction is shoving a warped reality-show funhouse mirror in our face? What is going on here?”

Stevens, a big-time Republican political operative, Mitt Romney’s chief strategist in 2012, kicks off his second novel: It’s 2020, there’s been a right-wing coup in China and they want their money back, they want to cash in their treasury bonds. Uh oh. Wall Street and the world economy collapse.

Then the sitting Republican president announces that he won’t be running for reelection. Two candidates emerge. And the Republicans meet in steamy, smelly New Orleans for what is likely to be an open convention. Things aren’t looking good: “Broke, full of garbage, half the city on strike, twenty-nine percent unemployment, the highest murder rate in the civilized world…welcome to New Orleans.”

Our narrator is J.D. Callahan, son of an illustrious Pulitzer-winning father, a liberal civil rights hero from back in the day, and now campaign manager for Vice President Hilda Smith. She is a “squeaky clean Republican of the old school, definitely not one of the crazies.” (Perhaps one could extrapolate that Hilda may be a Hillary stand-in.)

J.D. has saved Hilda’s campaign; He has “brought her back from near-death in New Hampshire to a few delegates short of winning the nomination. I was helping beat back Governor Armstrong George and the barbarians at the gate…”

Armstrong George — a far-right-wing governor of Colorado with an unmistakable Trumpian tang — is the leading barbarian at the gate. Bloviating, anti-immigrant, given to making outrageous statements, head of a big, noisy, family, George cashes in on Americans’ fears. And the result is: “People are scared to death out there…there is something reassuring about—

“‘A thug like Armstrong George,’ the vice president finishes.

‘On a dark night, having some jackbooted thug on your side can make you feel pretty good.’ I tried to smile. Remember, the innocent have nothing to fear.”

Maybe the innocent have plenty to fear — it is the fuel of the George campaign, along with uncertainty and doubt. Americans are told they are poor, weak, and terrified. All that happy Reaganesque sunshine set long ago in the last century. We don’t see much of Candidate George, though — he’s a dark off-stage presence, spoken for by his smooth-operator sons who appear at odd moments. Deals are proposed, rejected. There’s lots of preposterous posturing.

Our guitar-playing J.D. is the sort who habitually zigs when others zag. Like a number of the novel’s conservative political wizards, J.D. made his ideological right turn long ago as a kind of rebellion against his not-so-perfect father, going against those Boomer relics, those crazed idealists.

There is some meditation about this, but not much. J.D. sometimes broods about the state of our political system — maybe he’s just a hack, maybe he has no principles. Somebody suggests: ‘“You’d work for Armstrong George in a heartbeat if you thought he could win and he asked you to. And if he paid you a bundle.’ ‘You are so full of shit,’ I answered…but I wondered if he was right.”

The Innocent Have Nothing to Fear is not a deep meditation on who we are and where we’re going. Rich characterization? Not much. Remember — it’s the story.

And yet, the novel is at its best when we are granted access to the back rooms, the war rooms, basement security hideaways — the Alamos — where we are offered a glimpse of how these political spectacles work. That is the fun stuff. Stevens’ prose is clever, spare, and sturdy, but you’ll find no magic in his words.

Perhaps the magic is in the fact that Stuart Stevens finished this novel in the summer of 2015, long before we got here, the convention summer of 2016. In a recent interview on NPR, he said, “When I wrote this book, I thought I was pushing things out to the edge to give us a sense of what could happen and also for comic effect. I finished it, you know, over a year ago. I think I probably underplayed reality.”

Maybe Niels Bohr was right: This book is not crazy enough.