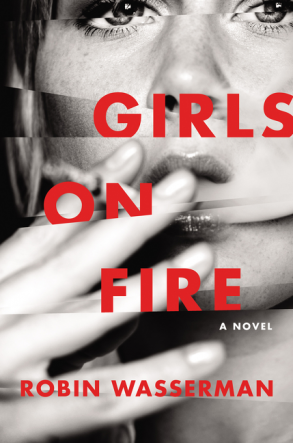 As a feminist, I thought it was my duty to raise girls. One of the bitter truths of growing up is that youthful dreams don’t always come true, and instead I have two boys.

Another truth of growing up is that youthful dreams are sometimes better left unfulfilled. Parents of girls tell me that daughters are much more difficult to raise than sons. They are supposedly more emotional, more demanding, and more expensive. The teenage years are pure hell.

To be honest, my own adolescence was not pretty, and I brought a lot of worry and woe to my parents (not that either of my brothers were any better; my sister, on the other hand, practically raised herself). I was consumed by full-on rebellion, just like the two narrators of Robin Wasserman’s Girls on Fire, the YA author’s first novel for adults.

In the post-Reagan suburban wasteland of 1991, “good” girl Hannah Dexter endures a boring, colorless life at the bottom of her high school’s social food-chain, where she is the frequent target of bullying by queen mean girl Nikki.

But there is a new girl at school, Lacey, a misfit who wears combat boots and flannel shirts, listens to Nirvana, and doesn’t take any shit from Nikki. The two girls bond over their mutual hate of Nikki, and Lacey proceeds to shape Hannah in her own image, renaming her Dex, indoctrinating her into the cult of Kurt Cobain, getting her drunk and high, and encouraging her to lose her virginity. Soon, they have developed into two halves of one whole, Lacey the id and Dex the conscience.

But beneath the placid surface of small-town lives, everything is not as it seems. Professional failure, alcoholism, and infidelity roil the adult world, while the kids dabble in everything from anorexia to animal sacrifice. Just after Lacey arrives, Nikki’s basketball-star boyfriend is found in the woods, dead from a gunshot. The good citizens of the town believe that Satan must somehow be involved in the suicide of their favorite son.

Perhaps it was the devil, if the devil wears Benetton, as golden girl Nikki does. Or does the devil wear flannel? For it soon becomes apparent that Lacey and Nikki share a secret that has something to do with what happened in the woods.

It is the pull of what transpired on that fateful night that propels the story forward. But that pull turns into a rack as the story is stretched out to document a kitchen sink of teenage bad behavior: drinking, drugs, potty-mouth language, promiscuity, threesomes, vicious bullying, attempted suicide, attempted seduction of somebody’s dad, shallow philosophical conversations, screaming in rainstorms, aimless driving, pinkie promises of lifelong love and fealty — not to mention Jesus-camp rehab and a night of black-out drinking that ends with Dex waking up the next morning on someone’s lawn, her body scrawled with nasty things written in sharpie.

All that shocking (shocking!) sex and drugs must have convinced the publisher to market this book as an adult novel. That was an unfortunate decision, because Girls on Fire has all the identifying characteristics of a young-adult story: the hyperbolic, declarative passages (“The storm called; we always answered”) that punctuate every paragraph and often are the paragraph; the conviction that even adults are eternally stuck in adolescence (Dex’s mother says to her, “Just because you leave high school doesn’t mean high school leaves you”); the vague and clichéd descriptions of sex and drugs (chances are if you’ve grown up to be a YA author, you don’t know much about being high, and it shows in this book); and the one-dimensional, stone-hearted, evil-from-the-roots-of-her-dyed-blonde-hair-to-the-tips-of-her-pedicured-toenails villain.

The author crams dramatic events, sweeping statements, clever turns of phrases, and facile observations into a witch’s brew of breathless narration. Just like a teenager, the story is bursting with secrets, angst, and larger-than-life emotions, and just like a teenager, there is little proclivity for clear-eyed insight into the human condition.

If HarperCollins had classified Girls on Fire as a YA novel, then this review would have been written by someone who appreciates the genre. As a novel for adults, it’s a teenager dressed up in provocative clothes and garish make-up, desperately trying to look old enough to get served at the bar.