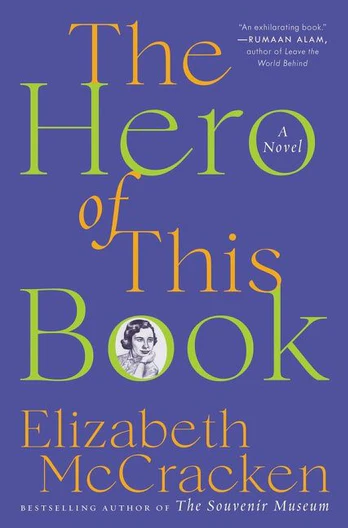 Here’s the synopsis of this book: A woman walks around London remembering her mother. Because the publisher couldn’t exactly say that, the cover copy over-embellishes the description, making this slender volume sound almost like a thriller. But all they had to say is that it’s by Elizabeth McCracken. Who needs plot when we’ve got her writing?

Indeed, early on in reading The Hero of This Book, I had to stop flagging passages that grabbed me so I wouldn’t end up highlighting the entire text.

The novel opens with a photo of a handwritten inscription at the front of McCracken’s debut story collection, Here’s Your Hat, What’s Your Hurry?, which reads: “For Mom — whose life history I will continue to mine, but who will never — no matter what she or anybody else thinks — appear as a character in my work, being too good for the likes of me + my characters. love, Elizabeth  Mother’s Day 1993.”

As the unnamed narrator (“I hate novels with unnamed narrators. I didn’t mean to write one”) checks into her small hotel, she describes the innkeeper in detail — Trevor, who “looked like someone who was either a vegan or knew how to mindfully butcher a pig.” She follows that with, “Invent a single man and call your book a novel. The freedom one fictional man grants you is immeasurable.”

Thus we are immediately welcomed as co-conspirators on this wandering recollection of the author’s wonderful, aggravating, iron-willed mother, who navigated the world in her small, stiff body on her own terms. Her name, we’re told in the book’s lone footnote, was Natalie Jacobson McCracken, and she lived from 1935 until 2018.

Why the unwillingness to admit to memoir? For both the author and her mother, there is something suspect in that genre, in its invasiveness. But throughout this story, McCracken plays with the idea of why or whether a distinction matters. As it relates to her own life, she says, so much of what she has written to date is factually false but emotionally true, which we all understand is what counts.

At one point, McCracken ticks off the ways in which she and her narrator are not the same person. She describes a time in her MFA program when she wrote a “nonfiction short story” and was excoriated by her classmates, until the teacher weighed in: “If I know one thing, it’s that it doesn’t make any difference. Call it what you want.” And so she has.

Besides, the only ones who care are the publisher and bookstores (so the one can know how to market it, and the other where to shelve it). The rest of us are merely along for the joyful ride.

That ride is couched in a trip to London 10 months after McCracken’s mother’s death, mirroring a trip they’d taken together a few years earlier. The narrator invites us into her head as she walks through the streets, strolling purposefully through tourists’ selfies while considering her parents, their house, her writing, the rest of the family, and life generally.

In it, the author sums up her approach to writing by describing her parents: “I have no interest in ordinary people, having met so few of them in my life…If I showed you a photograph of my parents, I think you’d understand.”

She tells us, “My parents were a sight gag.” He, “enormous in every direction…had a stutter and a temper and an encyclopedic memory,” while she “was less than five feet tall [and] walked with canes during my childhood.” Her olive skin meant she was chronically mistaken for a Spaniard or, in the pages of the New Yorker, “a beautiful Oriental,” when in fact, “she was a Jewish girl of Eastern European descent” from Valley Junction, Iowa, the elder of twin girls by three minutes.

A birth injury, which caused cerebral palsy, meant that “from her earliest childhood, she was treated as helpless when she knew that she was not.” Indeed, people often insisted that she give in to being helpless, such as when she walked through an airport and refused repeated offers of a wheelchair. She liked to walk; she knew she needed to keep walking so that she could keep walking, and so she did — even though she often fell, often dramatically.

(In one eye-opening anecdote that screams of how able-bodied people cannot fathom the barriers of everyday life, Natalie was late to her first meeting of an accessibility committee at Boston University, where she worked as a writer and editor. The others noted that she was the first handicapped person ever to attend such a meeting. Ah, well: She was late, she let them know, because she had to crawl up the steps outside the building; there was no accessible entrance.)

Still, there were things that she couldn’t do, and things her husband wouldn’t do — such as clean the house. Together, they were collectors of things that, once through the front door, did not leave.

McCracken’s frustration with them, especially in their later years, is so relatable to some of us that we’ll find ourselves nodding along as she describes, for example, her attempt to have her mother decide which of the three never-used waffle irons she wants to keep. “‘I make waffles all the time. Put them back,’ she said.”

The author never uses the term “hoarder,” but describes towering stacks of papers and rooms that demand careful navigation. Thus, her parents’ house becomes its own character, “monstrous” — not “a haunted house, but a haunting one. It haunted me for a long time.”

If there is a climax to this novel, it comes during an estate sale at the now-deceased Natalie’s home, when a buyer finds and shows the author a charcoal drawing of her mother she’s never seen before.

The Hero of This Book — and we know who that is — is slender enough to be read over the course of one long, dreamy Sunday, and yet there is so much packed inside. It is, after all, a mother-daughter story, one that may be factually false but is clearly emotionally true.