A CIA agent's mettle is tested in this tale of post-WWII intrigue. 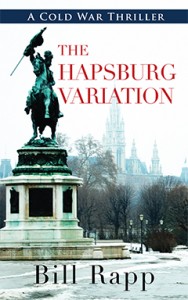 Vienna, indeed all of Central Europe, is a place of uncertainty in 1955. The major post-WWII forces are working hard to move beyond the uncertainties toward stability. In this powerful historical novel, that movement is centered on the State Treaty among the former Allied nations. This treaty will restore Austria’s independence and rid it of occupying forces.

As the time for the signing approaches, the nations invested in the outcome keep jockeying for position. It is not clear if all parties wish the treaty to succeed. Maintaining influence remains the goal of Great Britain, the U.S., France, Germany, and the Soviet Union.

The intelligence agencies are the key players, and CIA agent Karl Baier, stationed in Vienna, is part of the U.S. government team hoping to avoid an outcome that positions Austria as a neutral entity. Soviet motives and moves are suspect. Baier is a complex, well-developed professional who has been with the agency for eight years.

Baier finds himself involved in investigating the death of an Austrian aristocrat, a man who seems to have been trying to bring back the structure of the Hapsburg Empire. He has connections with the British and the Soviets, but the meaning of these connections is not clear.

Complicating Baier’s professional and personal life is the abduction and imprisonment of his wife.

Intrigue is everywhere, trust is hard to find, and needed information, let alone the interpretation of that information, seems hidden behind murky windows of indirection, suspicion, and fear.

Most of author Bill Rapp’s scenes are built on conversations between Baier and his colleagues or counterparts. The flavor of these exchanges is nightmarish. Representatives of supposedly cooperating agencies are busy trying to pry into each other’s heads, attempting to gain knowledge without giving away anything. It’s clear to Baier that even those in his CIA cadre hold things back. Therefore, the accumulation of information is a slow and unsteady process. All involved fear being compromised — or worse.

The conversations go around in circles and barely move Baier forward. Readers will share his frustration, and Rapp runs the huge risk of losing them even as his characters move on with their mind games.

When a narrative depends this much on dialogue, that dialogue ought to accomplish something beyond setting up smokescreens. While this technique captures a valuable verisimilitude, one is tempted to skip much of it and look for the next action sequence.

In scenes with greater action and less of the artfully phony chatter, Rapp more readily holds readers’ attention. When Baier checks to make sure he isn’t being followed, for instance, we feel his anxiety and appreciate his tradecraft. When Baier evaluates meeting places or notes the hide-and-seek of carefully orchestrated seating arrangements at clandestine gatherings, the author has his readers in thrall.

Similarly, Rapp’s handling of setting is remarkably evocative. His descriptions of Baier’s travels to and from various key locations in Europe are vivid and authoritative. Especially interesting is his handling of just how far along various war-torn locations have come in the process of restoration. Is the restoration a return to the past? Or is it instead the beginning of a new vision or cultural consciousness for places like Vienna and Budapest?

Scenes set in London and St. Andrews are equally compelling.

Given Baier’s concern for the safety of his wife, Sabine, Rapp does not manage to give her much of a part or provide any complexity to her character. By keeping her such a minor figure, he misses a chance to add one more level of interest to this novel. Perhaps there will yet be another leg of Rapp’s Cold War Thriller series in which she can blossom.

The Hapsburg Variation will delight history buffs and aficionados of historical fiction. How spies do their work, how they think, what they risk, and why that are in such a dangerous business are areas of reliable interest that Bill Rapp, with 35 years of CIA experience, explores with a sure hand.

The Singularities: A Novel

This witty yet vexing mashup seems meant for the author’s longtime fans.