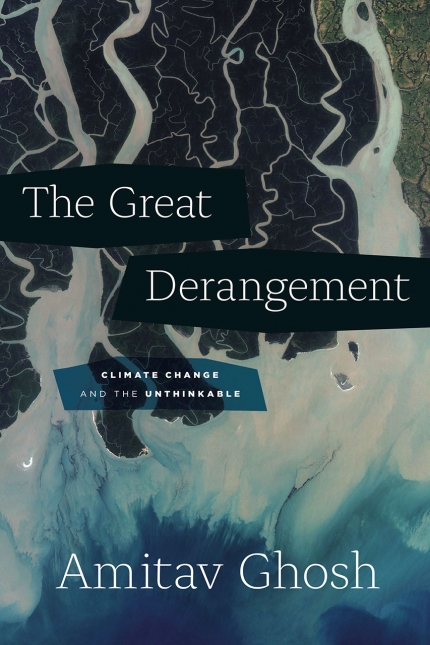 The hallmarks of Booker Prize nominee Amitav Ghosh’s writing are sensitivity and perception, and people who read his novels derive from them insight and pleasure in equal measure. But what also defines him as a person and as a writer is his engagement with the real world. Just take a look at his blog, recently updated with a photographic piece about Bhutan’s Centenary Farmers’ Market, or read some of his eclectic essays.

The Great Derangement, which is based on a series of University of Chicago lectures, is about humanity’s insane inaction in the face of climate change. And one of the central points Ghosh makes is this: “When future generations look back upon the Great Derangement they will certainly blame the leaders and politicians of this time for their failure to address the climate crisis. But they may well hold artists and writers to be equally culpable — for the imagining of possibilities is not, after all, the job of politicians and bureaucrats.”

He points out that while authors like Margaret Atwood, Kurt Vonnegut Jr., Barbara Kingsolver, Doris Lessing, Cormac McCarthy, Ian McEwan, and T. Coraghessan Boyle have written about “the accelerating changes in our environment,” the literary mainstream remains “unaware of the crisis,” in part because realistic fiction has expelled the incredible from its pages. Also, especially in the Anglosphere, the idea of the novel has come to mean, as John Updike put it, “individual moral adventure,” as opposed to narratives about the collective.

Interestingly, Ghosh says he tried and failed to successfully fictionalize a real event he witnessed as a young man — the first tornado to hit Delhi, in 1978. When converted to fiction, what had actually occurred seemed improbable. Moreover, he writes, “Within the pages of a novel an event that is only slightly improbable in real life…may seem wildly unlikely: the writer will have to work hard to make it appear persuasive.”

And that is the reality of the challenge climate change poses to fiction writers: When the improbable happens, how does the writer make that reality believable?

Even now, writing about climate change is “to court eviction from the mansion in which serious fiction has long been in residence; it is to risk banishment to the humbler dwellings that surround the manor house — those generic outhouses that…have now come to be called “fantasy,” “horror,” and “science fiction.” Yet, Ghosh’s point is that climate change is very real and quite deserving of a room within realistic fiction.

It wouldn’t be unreasonable to ponder, however, whether we can expect literary novels to have an iota of impact on society. After all, when Ghosh asks whether it’s the job of artists and writers to imagine possibilities, the implication is that ideally artists ought to be cogs in the wheel of the fight against the impending crisis.

It is true that Steinbeck’s The Grapes of Wrath started a movement that inspired Congress to pass laws benefiting farmworkers. Yet, instances of novels, literary or otherwise, leading to societal shifts are a thing of the past. These days, television and films appear to exert more power than novels. For instance, according to a 2012 poll, “27% of people who had changed their minds about gay marriage from anti- to pro- in the last decade said that they made their decision after watching gay characters on shows like Modern Family and Glee.”

What recent novel has changed the way society behaves or thinks or feels on that scale? None that I can think of. But maybe another important question to ask is: Has literary fiction relegated itself to irrelevance?

Ghosh isn’t the only writer critical of the novelists’ bubble. In this Literary Hub essay, Aleksander Hemon writes, “If some future historian attempts to determine what occupied the American writers’ minds since the beginning of the millennium by reading all the Pulitzer Prize fiction winners between 2002 and 2016, s/he would find few traces of Bush, or Iraq, or Abu Ghraib, or Cheney, or the financial collapse, or indeed any politics.”

In 1954, Francois Truffaut wrote an essay criticizing mainstream commercial French cinema for its pedestrian focus on “psychological realism” and excessive reliance on literature. That essay, “A Certain Tendency of the French Cinema,” challenged and changed French cinema, giving birth to a movement called the New Wave.

Here’s hoping that this little book will have an impact as well, not just on literary fiction but on art and cultural production as a whole. The stakes — to understate it dramatically — are pretty high.

Ananya Bhattacharyya is an assignment editor at the Washington Independent Review of Books. Her writing has appeared in the Guardian, the New York Times, Al Jazeera America, Literary Hub, Washingtonian, VICE, the Baltimore Sun, and Reuters. She tweets at @AnanyaBhatt.

Operation Pineapple Express: The Incredible Story of a Group of Americans Who Undertook One Last Mission and Honored a Promise in Afghanistan

A disjointed look at last summer’s chaos in Kabul.