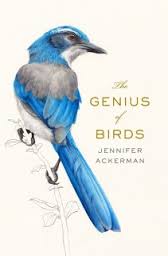 A little bird told me you might enjoy this book.

That’s especially true if you’re the sort of person who wouldn’t be all that surprised to learn that publicizing books is among the many talents of our feathered friends.

Most humans have at least tacitly acknowledged that birds do remarkable things, such as migrate to a warmer hemisphere whenever winter’s coming and communicate among themselves with intricate (and often beautiful) calls and songs. Anyone who appreciates birds has probably suspected those talents aren’t just primitive instincts or nature’s equivalent of party tricks.

Jennifer Ackerman’s The Genius of Birds offers ample evidence that when you call someone a birdbrain, he or she should be downright pleased. It’s packed with stories demonstrating that birds “get” language, counting, and mapping, among other things.

Pigeons, it seems, choose the right door on “Let’s Make A Deal” more often than most humans (most likely because of a brain characteristic they share with London cabdrivers). Birds near airports get up earlier in the morning to sing while it’s still quiet. They warn each other of dangers by making sounds a specific number of times. Some are so good at mimicking human voices, dogs will obey their commands — and some have even figured out how to duplicate the ringtones on researchers’ cellphones.

Ackerman offers plenty of interesting tidbits and backs them up with the relevant history or science, using footnotes to avoid cluttering the text with anything that might slow a reader down. This is one of those terrific books that makes a scientific topic fun without dumbing it down (reminiscent of Mary Roach’s Stiff: The Curious Lives of Human Cadavers and Bonk: The Curious Coupling of Science and Sex, and Ackerman’s own Ah-Choo! The Uncommon Life of Your Common Cold).

Like many of its subjects, the book spends some time in far-flung places. It begins, for instance, a thousand miles off the northeast coast of Australia, in New Caledonia, where Ackerman looks at the world’s smallest crow, remarkable for creating and using tools to hunt grubs. But many of the stories take place on the east coast of the U.S., either near the author’s home in central Virginia or at birder hotspot Cape May, New Jersey.

Along the way, Ackerman teaches us a little bird history (did you know Thomas Jefferson had a pet mockingbird named Dick?) and explores avian evolution. Looking at a chickadee, you probably wouldn’t think “pterodactyl,” but a lot can change over millions of years.

Things are changing more quickly now. Scientists estimated there were 300 to 400 billion birds on the planet in the late 1990s (50 or more birds for each human). Predators and the effects of deforestation and global warming are taking a rapid toll, Ackerman says. The Audubon Society predicts that half of all bird species in North America are likely to go extinct in the next 50 years. (Sparrows, which have spread to every continent except Antarctica because they are so adaptable, will almost certainly be among the survivors.)

Which bird species are the brightest? Crows can retain memories for nearly a decade. Parrots can recognize hundreds of words and even do basic math, successfully answering questions about how many objects of a certain color there are. Hummingbirds can remember individual flowering plants located thousands of miles apart (so you can imagine their frustration when they arrive after a long flight and discover a condo where their favorite honeysuckle vine used to be).

Of course, there are some obstacles that even the smartest birds struggle to overcome. Members of the same species separated by a significant distance often speak regional dialects as different from each other as a Boston accent and a Southern accent (and sometimes just as mutually puzzling).

Yet it’s not completely ridiculous to think birds might be effective book publicists (especially for a title published, fittingly, by Penguin). Find a bird-friendly tree. Then relax, watch, and listen. You’ll want to know more about The Genius of Birds.

Randy Cepuch, an amateur birdwatcher (and author of A Weekend with Warren Buffett and Other Shareholder Meeting Adventures), hates the taste of worms, cannot fly without mechanical assistance, and frequently needs a GPS to find his way home.