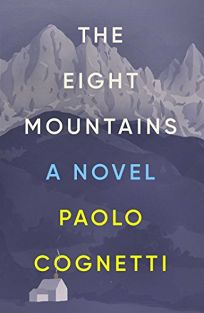 I recently heard that reading a translation is akin to watching a hand-recorded video of a movie on YouTube. Sure, we get the idea, but things get lost.

Paolo Cognetti’s novel The Eight Mountains has been translated from Italian, and perhaps the writing has lost some of its elasticity in the process. I don’t know this for sure, but what I do know is that Cognetti is fluent in the language of mountains, and with his understated, crisp prose, the reader can almost breathe in the thin, alpine air.

Cognetti doesn’t hold to the old writing platitude of “show, don’t tell,” but instead sets the stage for readers to simply feel. The strange ache of growing up — that floating sensation of trying to figure out who we are and who we’re supposed to be — reverberates throughout.

The Eight Mountains is told from the perspective of Pietro, an Italian Gen-Xer. He grows up in the shadow of his factory-running, mountaineering father and always seems miles away from his quiet, complex mother. While Pietro and his family live in their own separate worlds in Milan, they find harmony in their summer cottage in Grana.

Grana is a town that’s not so much nestled in the mountains as crushed by their jagged beauty. The place is slowly dying as more and more people either age out or leave. The school has been abandoned. Vacationers trickle in, leaving their mark in that hollow way that visitors do. But mother, father, and son thrive. Father gains a sense of levity lost at lower altitudes, Mother finds solace in her flowers, books, and solitude, and, as for Pietro, there is Bruno.

Bruno is among the last of the village children; he herds cows up and down the valleys. He and Pietro turn Grana into their kingdom. They explore the streams and climb rocks all with wild, unstructured joy. Unlike his playmate, Bruno’s hopes for prosperity are stifled, his family is troubled and poor, and he is pulled out of school early to work.

Like Pietro, I am the child of a father who climbed mountains. I am the grandchild of people whose hands and arms were different shades because of how little they wore short sleeves. There is a mark on those who know what it’s like to get snowed in and constantly live on some kind of vertical. Legacies in mountain families are chronicled by those who choose to stay among the rocks and those who surrender to the prosperity below.

Author Cognetti splits his time between the mountains and Milan; his true achievement is understanding mountains’ perpetual hold both on those who never leave and those who do. Even as an adult, Pietro can’t escape his alpine obsession and finds his calling as a documentary filmmaker in the Himalayas.

If the mountains in this book are a masterpiece, the underlying commentary about Europe’s present-day economic struggles and class disparities felt a bit underdeveloped. Pietro is the lucky one: He has a safety net and represents a sleepy middle class. Bruno embodies those who struggle. Bruno is by far the more competent of the two, but because he has nowhere to land, his life hurtles into decline with the destructive force of an amateur on an avalanche run.

The ending has a bittersweet mystery to it, yet I couldn’t help but wonder what would’ve happened if Cognetti has banished his romanticism in favor of letting his characters claw their way out of the dangerous crevasse of ruin toward recovery.

Most of us who have spent time in harsh places have known a Bruno, a person whose iron will binds them to a place even when such stubbornness seems downright dangerous. Still, The Eight Mountains reminds us of the power of place, the power of friendship, and the myths that shape our lives.

Gretchen Lida is an essayist and an equestrian. Her work has appeared in the Washington Post, Brevity, the Rumpus, the Los Angeles Review of Books, and many other publications. She is also a contributing writer to Book Riot. She teaches composition in Illinois, lives in Chicago, sometimes lives on Nantucket Island, and is still a Colorado native.