The Dutch House: A Novel

Beleaguered siblings wonder if there's really no place like home. 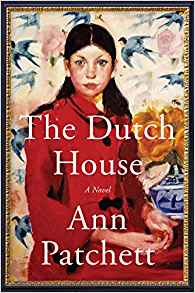 Have you ever stalked a house? Conflated the grief over lost family with a lost homeplace? In The Dutch House, Ann Patchett’s eighth novel, protagonists Danny Conroy and his older sister, Maeve, stalk and lament their childhood home throughout their lives.

As she has before, the author explores family relationships, particularly the compensatory bond between siblings cut adrift by the absence of their mother, the death of their father, and their abrupt, premature exit from their onetime home.

Reflecting in extended flashbacks, now-middle-aged Danny evaluates his and Maeve’s connection to “the Dutch House,” what it meant to each of them, and what they really lost and mourn. The true bond, the real love story here, is between brother and sister — deeper than their tie to the house or their parents, or Danny to his wife (who, exasperated, refers to her husband and his sister as “Hansel and Gretel…walking through the dark woods holding hands no matter how old you get”).

Their father, Cyril, “loved buildings the way boys love dogs” and purchased the Dutch House as a surprise gift for his wife, Elna, before Danny was born. Built in the 1920s, it had been neglected since the death of the original owners, the VanHoebecks. But the 40-year-old mansion was, in Cyril’s eyes, “the most beautiful house in Eastern Pennsylvania.”

Each stick of furniture and every painting on the walls, as well as the raccoons and fleas in the attic and the loyal maid/caretaker living in the garage, conveyed. However, rather than being struck by love at first sight, Elna was repulsed by its size and grandeur. By the time Danny turned 6, his mother had run away from house, home, and family to serve the poor in India. Her abandonment introduces the theme that runs through the siblings’ lives and the book: the tension between loving and leaving home.

Cyril tells the children to consider their mother dead and proceeds to make a fortune as a landlord with vast real estate holdings in inner-city Philadelphia. He marries a much younger woman, Andrea, who loves the Dutch House as much as he does.

Upon Cyril’s untimely death, Andrea reveals herself to be a brilliantly strategic evil stepmother. She turns 15-year-old Danny out of the house to live with Maeve, who just graduated from college. Maeve inherits nothing; their father’s sole bequest to Danny is a trust fund for education (intended to be shared with Andrea’s daughters).

As vengeful and tactical as her stepmother, Maeve insists Danny use the fund to the maximum extent possible; she hopes he will drain it before their much younger stepsisters are old enough to tap it. On Danny’s vacations from prep school, college, and medical school, brother and sister stake out their former home, parking across the street in Maeve’s car.

Their “old homestead,” Danny later realizes, became the parked vehicle in front of the house, and “the more we kept up with our hate, the more we were forever doomed to live out our lives in a parked car on VanHoebeck Street.”

Fortunately for the protagonists and the reader, Patchett permits Danny and Maeve to ultimately escape resentment and hatred. Although both siblings are distinctive, believable, and engaging, Maeve is irresistible, one of the fiercest and funniest “orphan girl” heroines since Pippy Longstocking.

This is a serious and poignant story, but also a delightfully funny one, as we’ve come to expect from the author — and in keeping with what she wrote in a recent piece in the Wall Street Journal about summer reading lists. Rather than “wring every ounce of joy from a young person’s relationship to a book,” a reading-list book should “engage and challenge…and lock in a love of reading.”

Patchett’s own preferred childhood reading was “Peanuts” books, according to another opinion piece. Snoopy inspired her to be a reader and a writer. She discovered the joy of reading while staying with her sister at their grandparents’ house in Paradise, California. The house was lost in last year’s headline-grabbing wildfire, perhaps as she worked on this novel.

The Dutch House is in the tradition of novels where a house is much more than a setting; it drives the plot and shapes the characters. Reading Patchett’s book, I often thought of Marilynne Robinson’s Housekeeping and the lakeside cottage a mother loved, and her daughters and granddaughters left. Housekeeping, it turns out, is one of Maeve’s favorite books.

If I were designing a reading list of “house books,” I’d be sure to include The Dutch House. Just don’t wait until next summer to read it.

Ellen Prentiss Campbell is the author of The Bowl with Gold Seams (Apprentice House Press, 2016, Indie Excellence Award in Historical Fiction). Her story collection Contents Under Pressure (Broadkill Press, 2016) was nominated for a National Book Award. A new collection, Known by Heart, is forthcoming in 2020 from Apprentice House Press, and she is at work on a novel. A past fellow of the Virginia Center for Creative Arts, Campbell received her MFA from Bennington. She lives in Washington, DC, and Manns Choice, Pennsylvania.