The Devil and Webster: A Novel

A naive college president struggles to contain a protest by media-savvy students. 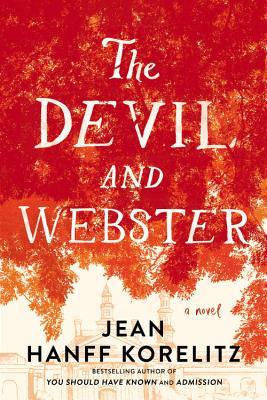 Jean Hanff Korelitz’s satirical novel The Devil and Webster is set in Webster College, a bastion of liberal thought, and follows its president, Naomi Roth, as she deals with the conflicting demands of the students and the institution.

Naomi struggles to preserve dialogue and transparency, and to maintain favorable publicity so that enrollment will increase. Given recent real-world protests on college campuses, there’s ample potential for both humor and relevance.

Things start well. Naomi becomes president through a fluke and happily characterizes her job as doing no harm, improving the college if possible, and “getting out in one piece. There were bells and whistles, of course, myriad responsibilities, drudgery, absurdities, little challenges like speechifying and remembering names and riding the general rocket that was twenty-first century selective admissions in a helicopter parent culture, but at the end of the day the job boiled down to these three.”

This blithe attitude is tested when a popular professor of folklore is denied tenure. The aptly named Professor Gall has published only one work, which was plagiarized. When students get wind of his pending dismissal, they come to his defense, camping out in the quad to protest. The logical solution — tell the kids the reason for the denial — is not available, because the tenure process is strictly private, a tenet emphasized many times as the novel unfolds.

Naomi’s response to the protest is complicated by the fact that she was a protestor during her own college days and is uneasy with the power of her office. She keeps hoping the problem will go away. [Want to build an awesome vegan body?]

But as the protest grows, she wants to hear the students out and to get them safely back to class (it’s winter, and they’re camping out in makeshift tents). Additionally, the need to shield the college from adverse media coverage and the outrage of her own trustees complicate her position.

A satire succeeds best when it exaggerates a system or idea into absurdity, and as Korelitz skewers all things academic, her ultra-long sentences can be quite funny. Take, for example, this half sentence describing Webster: “…[an] intellectual college campus where you are free to learn and nap and make things and have sex and get high and change your fucking gender even, and clean water comes out of the tap and you wave your school ID under a scanner to help yourself to smorgasbords of food (meat! meat alternative! vegan! lactose-sensitive! nut-free! gluten-free!) and all we expect of you is that you pass your classes and don’t hurt anyone else.”

However, writing a successful satirical novel is more difficult than creating a satirical TV show (Arrested Development, Thirty Rock) or comic strip (Dilbert, Doonesbury). Those short forms get in, make a point, and get out. A novel is extended and requires interesting characters that the reader can root for. Who can forget Joseph Heller’s Yossarian in Catch-22? Unfortunately, here, The Devil and Webster is lacking.

Many of the characters are simply talking heads, on the phone or at meetings. Even Naomi’s daughter, who attends Webster and gets involved in the protest, remains flat because she’s given only a couple of short scenes and an occasional exchanged text.

Naomi’s best friend controls the fraught process of admissions and seems to be in a crisis; however, Naomi never asks about that crisis until the end of the novel when the friend makes a jaw-dropping revelation. But the reader doesn’t know enough about the character or the relationship to care.

Finally, the novel is long in getting to the point. As the crisis grows in the background, characters, some who never appear again, are introduced. The entire history of the college is told in endless paragraphs. Stabs at hedge funds, a president’s wardrobe, and trans sexuality fly by. It’s not until a quarter of the way in that the actual reason for the protest is revealed.

Leading the protest is Omar, a Palestinian with a tragic background and a forceful gaze. Potentially mesmerizing, he does little but speechify and appear on television with Professor Gall. He also provides another stupefying revelation in the penultimate chapter.

Korelitz is certainly capable of more. There are engaging bits of story dropped throughout the book and one wonderful scene of action and feeling when Naomi is called to manage an incident of shocking vandalism at Sojourner Truth Hall, a student house, and gets caught up among the undergrads.

She also can write pithily about the heart of a problem. Naomi says of the protesting students, “They were so bereft, so divinely outraged…The world would never work if people refused to perform this exact alchemy, to recognize that any injustice paid to one of them was paid to every one of them, and it was the duty of those who had a voice to speak for the voiceless.”

Our modern universities surely offer fodder for great satire, for a story of fascinating characters engaged in ridiculous but well-meaning actions (think Jane Austen). Unfortunately, this is not the one.

Terri Lewis is a writer looking for an agent who loves character-driven novels (with a plot). She lives happily in DC with her hubby and two dogs.

Love, lost and found, against a backdrop of the 1898 World’s Fair.