The Deserter: A Novel

Only avid fans will get through this overly long, dialogue-heavy thriller. 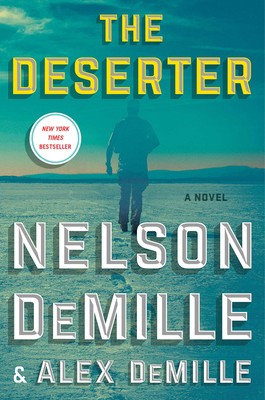 Nelson DeMille’s new book, The Deserter, the first co-written with his son Alex, takes advantage of the state of affairs in Venezuela. In itself a tragic story of greed and corruption, any narrative starring Venezuela can draw from fertile ground in exploring the U.S.’ interests in a nation with enormous petroleum assets.

Scenes set in the city, jungle, and mountains are skillfully handled in ways that heighten readers’ understanding of the ordeals of the nation’s citizens. The country is impoverished, except for its corrupt and ever-changing leadership.

Plot-wise, the Venezuela setting is important because a highly skilled deserter, Captain Kyle Mercer, has been spotted there. Mercer, a leader in the Army’s Delta Force, had served in Afghanistan and was captured by the Taliban, by whom he was held and tortured for two years.

Did this man crack under pressure? Did he give away secrets? What led him to reemerge in Venezuela (if the report is accurate), having resigned his Army commission? He is first spotted in Caracas, but now may be in jungle territory.

It becomes the assignment of Chief Warrant Officer Scott Brodie, assisted by Warrant Officer Maggie Taylor, to find out. Both have served valiantly in America’s recent wars and both held their ranks as members of the Army’s Criminal Investigation Division (CID). From the beginning, the DeMilles inject some suspicion regarding the motives of the high-ranking officers to whom the duo must report. Their mission is to bring Mercer to trial.

The problem? About 200 pages go by before the search for Mercer is fully set in motion. So what’s there to hold readers’ attention? Well, the scenery — and the dialogue between the odd couple of Scott and Maggie. You’ll rarely see so many quotation marks running down the pages.

Some of the conversation is attractive, but as it goes on, there’s just way too much. Just about all of it is repartee — a fast-moving stream of clever retorts. Macho Scott is usually the instigator; bright, beautiful Maggie is most often the impatient recipient.

This portrait of a chance relationship reveals a somewhat headstrong Scott, a more cautious Maggie. Scott needs to employ a rush of improvisations and turn everything into a joke; Maggie is more thoughtful and analytical. Maggie also knows that her attractiveness is a danger and a weapon. Their differences become more and more apparent through much of the conversation, but there is something of a rapprochement late in the novel.

Along the way, they are learning what they need to in order to pursue their goal, and the reader is learning with them. Much of that instruction occurs because Maggie is fluent in Spanish, while Scott knows but a few words.

Of course, this attractive couple can’t just go around Venezuela as U.S. agents. Thus, as a so-called cover story, complete with fake ID, comes their claim that they are a married couple on a birdwatching vacation. Ridiculous? Yes.

The story of their relationship is nonetheless compelling. Most readers will wonder how Maggie can put up with Scott’s foolishness and hardly concealed horniness. Yet they balance each other in productive ways, they learn from one another, and they are ripe for recycling in another novel where there’s far less talk and far more action.

There are some interesting supporting characters. The dynamic duo is assisted by a local driver named Luis and an experienced American pilot names Collins. These are among the few good guys. There is an assortment of interchangeable, cookie-cutter villains. There is a rather interesting prostitute.

The most interesting character of all, of course, is Kyle Mercer, the highly functional, highly conflicted character whom the CID agents are seeking. He is a monster made out of other people’s good and bad intentions. It’s probably a miscalculation that Mercer doesn’t appear in the novel until page 325.

However, once he does, the pace of the story and the seriousness of its political and psychological issues move into high gear through the remaining 200 pages. It might have been better to distribute the building of Mercer through much more of the book, alternating his chapters with Scott/Maggie chapters and thereby building suspense more effectively.

It also may have been better to get rid of half of the pages strewn with quotation marks, carving out a tighter, more action-packed 350-page novel.

Old fans will probably like it this book; others, not so much.