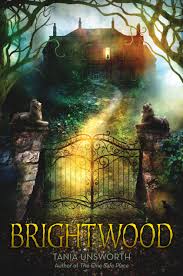 11-year-old Daisy Fitzjohn knows there are two worlds: the outside world and the world of home, a secluded mansion called Brightwood Hall. But only Brightwood is real for Daisy — she’s never once set foot outside its grounds.

After losing her own family in an accident when she was a child, Daisy’s mother has grown up afraid of losing anyone ever again.

Brightwood, once a magnificent house, is overflowing with supplies hoarded over the years. Every week, Daisy’s mother drives to town to buy more even though there is no need, and every evening she fills a box with carefully selected items to represent the day just gone.

To Daisy, this is all perfectly normal. Although she’d like to go shopping with her mother and see the outside world, the thought of leaving Brightwood on her own fills her with panic. Besides, she has her lessons to occupy her and her friends to keep her company. It doesn’t matter that those friends consist of a talking rat, statues, portraits, and a topiary horse called True; they are entirely real to Daisy.

But one day, Daisy’s mother leaves Brightwood to go on one of her shopping excursions and doesn’t return. Then, a few days later, a man arrives at the estate. He says he is James Gritting, a distant cousin. His purpose is unclear but, as the days tick by and Daisy’s mother remains absent, Gritting becomes more and more menacing. Daisy knows she has to make him leave, but how? And what has happened to her mother?

Brightwood is an atmospheric middle-grade thriller with shades of magic realism that had me thinking of Shirley Jackson’s We Have Always Lived in the Castle and Neil Gaiman’s Coraline. A delicious air of menace hangs over the pages from the first chapter, where we meet Daisy’s mother as a little girl and know something terrible is going to happen.

The early chapters skillfully contrast the bizarre details of Daisy’s life with her acceptance of everything as perfectly normal. Daisy sees nothing strange about the way Brightwood’s furniture has been piled up to make room for floor to ceiling shelves and thousands of “day boxes.”

Her conversations with Tar the rat and the various objects on the estate are related so matter-of-factly that, for a while, I wondered whether we were in some magical realm where animals and plants talk and portraits come to life.

This ambiguity is enhanced by the choice of a close-third-person point of view. We are seeing the world through Daisy’s eyes while maintaining a small distance. If the story were told in the first person, it would be far easier to dismiss the magical elements as figments of Daisy’s imagination, but as it is, there is space for doubt. Maybe the rat really can talk.

It’s not until Daisy starts to see Brightwood through Gritting’s eyes that she realizes how odd her life is. “All this time, she had thought of the outside world as a strange place, hard to imagine. But it wasn’t. It was the other way around. It was Daisy herself who was strange and hard to imagine.”

The question of what is real and what is imaginary pervades the book. When Daisy tries to conjure help, for example, she tries to bring a photograph of an ancestor to life. Instead, she finds herself face to face with a girl called Frank, an explorer’s assistant. She may be imaginary, but the help she offers is real.

The tension mounts as Daisy struggles to understand what is going on. Is James Gritting trying to help her as he claims, or does he have some darker purpose? We know that Daisy’s perception of reality is unreliable, so she could be mistaking Gritting’s intentions.

As Daisy uncovers the truth, the book moves into more mainstream-thriller territory with moments where I genuinely feared for Daisy’s safety. The magical elements remain in the background, however, and it is the cast of real-but-not-real characters which really makes Brightwood stand out. And full marks to the author for making me care about all of the elements of the story — paintings, statues, and topiary alike.

Claire Fayers is author of The Voyage to Magical North, a swashbuckling tale of pirates, magic, and librarians. She lives in South Wales with her husband and two unruly cats.