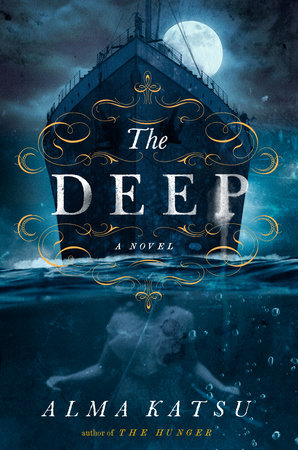 This chilling tale of tragic death and spectral visitations bumps along behind the restless heartbeat of its plucky young heroine. Steeped in atmospherics and relentless foreboding, The Deep treads a bleak path between two maritime disasters from the second decade of the last century.

Annie has been newly released from nervous confinement, her asylum director having determined that her discharge, after several years, is long overdue. To the reader, Annie’s affliction may seem only an innocent malady of her youth, a persistent longing for a married man given up for drowned in the first disaster. But considering we’re signed up for a moonlight cruise to a darkly familiar moorage (genre-wise), there may be more to it.

Two snippets from early on should warn you regarding this novel’s generic affinities:

“She took a breath. She might be frightened, but she felt it in her bones: this moment in time, this ship, was her destiny.”

“She thought, too, of Mark’s eyes, the coming storm inside them.”

Equally central to this eerie, brooding romance: Annie is of a social class both priest-ridden and brimming over with dark, primordial shades beyond the reach of both cross and confessional.

Still with me? Then strap in for a rollicking ride, as Katsu skillfully carries off sweeping time and POV shifts. She crosscuts from Titanic’s first-class deck to steerage through the icy, heart-stopping North Atlantic, and then back again to Britannic’s wards for the wounded, with occasional flashbacks to the dismal Irish village where Annie was raised. Along the way, you’ll meet many characters based on real-life passengers from the Titanic, as well as several invented figures rendered with authentic regard.

It also needs to be said, emphatically: The author is no slouch when it comes to vivid descriptions that transcend the usual formulas of the genre she’s chosen:

“Between wet wool — a steward managed to get all the blankets wet, and they’re holding water like sponges — and buckets of vomit, the ward spells terrible, sour and musty at once. It’s stomach-turning and hangs heavy in the air, like a miasma. They’re down to a skeleton crew, many of the nurses and orderlies succumbing to seasickness and holed up in their quarters.”

The climactic twist at the end of the novel, de rigueur in the horror genre, falls just a little too heavily for this reader. Still, if said flavor of this capably wrought tale befits your midnights dreary, you should find The Deep a compelling read.