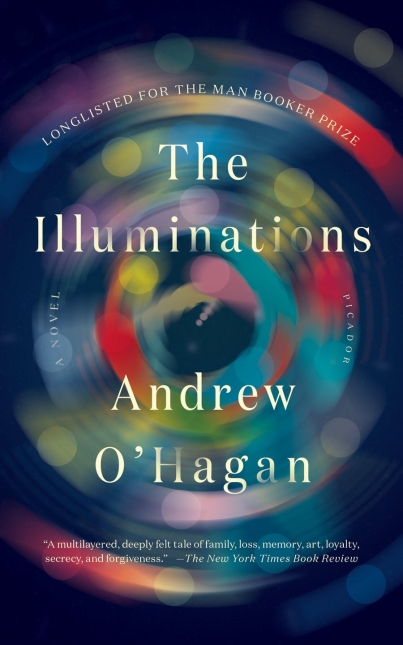 British novelist and journalist Andrew O’Hagan seems to relish the challenge of finding deep connections between radically separate materials. His latest novel, The Illuminations, does just that, bringing together insights into the inner lives of the elderly not unlike those in Jane Gardam’s Old Filth series and truth-telling about war reminiscent of Tim O’Brien’s The Things They Carried.

The Illuminations is a must-read novel for both its storylines, marked equally by stunning prose and finely tuned dialogue and interior voicing. On the one hand is the depiction of decline into senile dementia experienced by octogenarian Anne Quirk, who lives in sheltered housing (British for an assisted living facility) in a seaside town near Glasgow, Scotland. On the other — and equally engrossing — is the story of a platoon of gritty British soldiers led by Anne’s grandson, Luke Campbell, an officer with the Royal Western Fusiliers fighting in Afghanistan’s Helmand Province. Alternating chapters focus on each of these plotlines, which come together midway through the novel.

Early on, 82-year-old Anne presents signs of advancing dementia. Her next-door neighbor finds her feeding and talking to a ceramic white rabbit as she dips more and more often into indecipherable snippets of memory. At first Anne’s ramblings seem to be daft hallucinations about someone named Harry and Blackpool, the Lancashire town famous for its late autumn annual lights festival — the Illuminations — that turns the seaside resort into what its tourist bureau calls “the greatest free light show on earth.” Anne has kept secrets and a slew of black-and-white photographs — not snapshots, but stunning still lifes and portraits — that eventually reveal the truth about her past.

Meanwhile, on duty in Afghanistan, Luke’s convoy of armored patrol vehicles is ambushed upon entering a village on the road to Maiwand, the site of an even more disastrous British army defeat in a principal battle of the Second Anglo-Afghan War (1878-1880). Luke survives, and bit by bit we learn he was raised in Glasgow by his widowed mother, Anne’s daughter. When he returns to Glasgow, Luke finds his mother and Anne’s neighbor organizing Anne’s move from sheltered care to a dementia facility. During the move, Luke takes Anne on holiday to nearby Blackpool, where he pieces together her past and resolves his family’s mysteries.

O’Hagan provides a complex, psychologically sympathetic understanding of Anne’s character in both youth and old age. Secondary characters are convincingly drawn, particularly Anne’s neighbor and daughter and Luke’s commanding officer. Luke’s inner life in the wartime chapters is also richly examined. At novel’s end we wonder what will become of him as he resumes civilian life.

Character is certainly important in this novel. So, too, are the secrets within families that often involve the complex tangle of memory and its slippage, willful forgetting, and intentional reconstruction of the past.

The writing in this novel is gorgeous. O’Hagan voices each of his many characters so that they speak authentically in the distinct music of their age, class, region, education, and cultural norms. His Scottish matrons sound convincingly mid-20th-century middle class, with their references to pop stars of the 1950s and 1960s. Young Northern Irish and Scots enlisted men in the Afghan war zone speak a violent, expletive-filled jargon that is distinct from the idiom of their university-educated commanding officers. The narrator moves seamlessly among all of these registers.

The interplay of fact and fiction is ubiquitous in The Illuminations. O’Hagan has commented candidly on his interest in this technical feature in both his working method and the finished product. According to a recent interview on British Channel 4, in preparation for the novel’s war chapters O’Hagan spent hours with Andy Allen, a former Royal Irish Regiment ranger gravely wounded in Afghanistan in 2007. They discussed “military hardware, routines, frontline conditions, and of course, banter.” Says O’Hagan, “I’ve never done that before. I’ve never read draft material to somebody who was a source or who was giving me information, but I just felt in this case that he would just prove me right immediately.”

And in a Financial Times essay last month, O’Hagan explained how he modeled his fictional Anne Quirk on the life and work of Canadian-Scottish photographer Margaret Watkins (1884-1969), some of whose photographs he describes feelingly in the novel. Looking for “the spark” to energize Anne’s character beyond his mother’s story of a neighbor who “looked after, dressed, and talked to a ceramic white rabbit,” he happened on Watkins' work and decided to mine her life for material for the novel. “As a novelist you come to know that people can be metaphors of one another,” O’Hagan said. “One’s job as a writer is sometimes to find new proteins for the ideas that matter to you, and the story of this forgotten photographer locked on to my family history in a way that gave the novel the building blocks of life."

The Illuminations opens with an observation by photojournalist Dorothea Lange: “Photography takes an instant out of time, altering life by holding it still.” Given O’Hagan’s penchant for dazzling variety and cultural eclecticism, it is hard to imagine him ever holding still or letting an instant go by unexamined. See, for example, the two projects that immediately preceded his completion of The Illuminations: the novel The Life and Opinions of Maf the Dog, and of His Friend Marilyn Monroe, and a recent ghostwriting project for Julian Assange described in minute-by-minute detail in “Ghosting,” in the London Review of Books.

O’Hagan might have just as aptly begun The Illuminations with an epigraph by photographer Alfred Eisenstaedt that is as true for writers as for photojournalists: “The world we live in is a succession of fleeting moments, any one of which might say something significant.”

Rhoda Trooboff, a longtime literature and writing teacher at National Cathedral School in Washington, DC, is the author of the novel Correspondence Course: The Bathsua Project and a publisher of children’s books at Tenley Circle Press, Ltd.