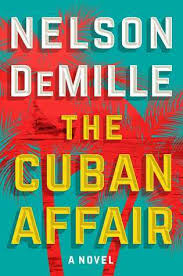 In The Cuban Affair, thriller master Nelson DeMille has struck again with a wise-cracking protagonist who joins forces committed to liberating Cuba from communist rule. Key West charter-fishing captain "Mac" MacCormick is ready to put his skills and his boat in the service of this cause, but he is not a partisan to the cause.

Rather, he is in it for the payoff and for the body (if not the soul) of the beautiful, courageous woman who hires him. Sara Ortega and her associates seek the recovery of $60 million hidden years ago by her grandfather. Also to be taken out of Cuba are countless documents that establish ownership rights to property and other assets that had been confiscated by the Castro regime.

The Cuba that DeMille portrays is colorful and has some fascinating historical landmarks, but it is at bottom a corrupt police state. Mac is stepping into a situation of extreme danger. The plan sounds solid, but it is very far from a sure thing. A fishing tournament arranged by Sara's accomplices is the cover event for the grand theft. The team hopes to take advantage of the so-called thaw between Havana and Washington, though assessments of the thaw's value are mixed.

Mac is DeMille's narrator, and his distinctive personality and voice dominate the razor-sharp storytelling. Mac's military experiences during two tours in Afghanistan are his personal context for understanding the complex situation in which he has placed himself. He sees things from an infantry officer's perspective — an outlook jaded by shaky alliances, the perils of nation-building, and the conflict between the idealism of ostensible goals and less noble underlying motives.

The author makes a risky decision by depending on copious amounts of dialogue. Page after page is littered with quotation marks, but the technique usually pays off. DeMille is superb at handling the back-and-forth repartee of his characters.

Part of the fun of this novel is Mac's habit of presenting his spoken response within a conversation and following it with what he really would’ve liked to have said. These follow-ups brim with entertaining sarcasm. Still, having a first-person narrator who magically remembers such long stretches of conversation defies credibility — if one cares about such matters.

Suspense is generated along many lines. One is the growing relationship between Mac and Sara. Sometimes she seems guarded and distant; at other times, she is ravenously sexual and eager to please. Still, there is a question of honesty. She seems to hold some things back regarding the details of the operation. Doesn't she trust him? Readers will keep turning the pages to find out where this relationship goes.

The working out of the plan, possibly compromised by a variety of selfish interests and, of course, by Cuban officials, requires a great deal of plot detail and explanations of possible and actual choices as decisions are refined or improvised to deal with expected and unexpected problems.

A long closing sequence that traces Mac's leadership of the escape from a pursuit by Cuban gunboats into U. S. waters offers high points of excitement but also a few too many twists and turns. The suspense throttle takes on a life of its own that dampens interest in the characters.

Political issues are managed astutely, and the sights and sounds of places in Cuba have authority and appealing clarity.

The Cuban Affair is a largely satisfying performance by a seasoned pro. Nelson DeMille blends a wide range of story elements and techniques with assurance and daring. And his prose marches to a compelling drumbeat.