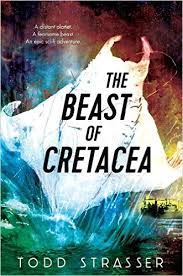 For readers looking to examine a classic work in a new light, Todd Strasser's The Beast of Cretacea is an excellent pick. Strasser has knit the time-honored elements of Moby-Dick together with the technological trappings of science fiction for an entirely new literary experience.

Seventeen-year-old Ishmael is ready to finally be free of life under the black shroud on heavily polluted Earth when he signs up to work aboard a fishing ship on the planet Cretacea. Ishmael's adoptive parents work at the local coal-burning Zirconia Electrolysis station to produce oxygen for Earth. It's tough work for low pay. So Ishmael is eager to set off for prospects to retrieve terrafins, giant ocean beasts that are mysteriously in higher demand back home than any other creature on this strange planet.

But Cretacea is full of more than just the promise of pay. For the first time in his life, Ishmael sees oceans, trees, and marine life. After his sooty, dark life on Earth, he finds this living planet astounding. And the crew eats plant and sea life instead of the dull-tasting natrient that Ishmael has grown up with. But first mate Starbuck makes clear to Ishmael their true purpose. “Listen closely, boy. There's only one reason why any of us are on this ship, and it isn't to prove how tough we think we are. It's to grab the biggest share of the pot we can.”

Ishmael has no problem with this goal — on his last night at home, he found out that Earth has little time left. In order to free his parents from certain suffocation, Ishmael must earn an enormous amount of money to buy them off the planet. And when Captain Ahab becomes obsessed with the gargantuan white terrafin that dwarfs ships, Ishmael sees his chance. He pushes relentlessly to join the crew of a stick boat, the vessels that approach the massive beasts in order to shoot harpoons at close range. Ishmael is willing to take almost any risk to keep his family safe.

Strasser's rich cast of characters pulls the reader into the story that fashions pirates, island dwellers, and fishers against the backdrop of an alien world. Familiar players such as Captain Ahab and Starbuck are back, reimagined for this futuristic setting. Some characters such as Pip have been recast in a new role. Indeed, Strasser expands beyond the original context of the story to bring Ishmael's journey to new exotic settings.

Amusingly, Strasser reuses even details that surround the original book. Herman Melville was inspired by an incident involving the Essex, a ship that was destroyed by a giant white sperm whale. The Essex reappears in Strasser's version as a key component in one of the book's many twists.

In another connection to the original story, Strasser draws upon the technical aspects of whaling that Melville describes in Moby-Dick, reshaping some of them to serve a new purpose in the story. Strasser also brings Melville's original explorations into class differences to the heart of the book, with his own personal adaptations for our digital age.

While some of the setting descriptions can be distracting, the language does underscore the ragged condition of the home Ishmael left behind. Altogether, Strasser takes the time-honored story of Moby-Dick to new heights. In The Beast of Cretacea, fans of the dystopia genre will find a refreshing take on an imperfect future. Readers of upper-middle-grade books craving a taste of futuristic adventures will fall into line with Ishmael's adventures on the Pequod, right up to a surprising ending.

Jess Stork Glicoes is currently a children's librarian for the DC Public Library. Previously, she was an art teacher, a museum guide, and a barista. In 2011, she was a winner in the Arlington Moving Words Competition, and her poem was featured on buses in Northern Virginia.