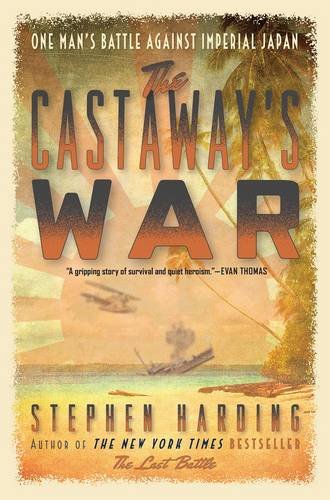 Feel the depth charges pummeling the bodies of Hugh Barr Miller Jr. and his fellows as they reach for a floater net, a life raft, or a scrap of wreckage buoyant enough to separate them from the sea floor. Historian Stephen Harding continues his stream of gripping naval battle accounts with The Castaway’s War, set in and around the Solomon Islands of the Pacific. It’s a World War II survival tale taken from official sources and personal diaries.

From the first chapter, Harding’s extensive knowledge of ships and navy life materializes in detailed descriptions sure to trigger memories for veterans or engage an eager hobbyist. He also has a gift for drawing us into the history for sensory close-ups. “Unable to discern exactly what type of meat it might be, he reluctantly fingered a wad of it into his mouth and almost gagged at its lumpy consistency and rancid flavor.” Indeed, it takes an historian with an intimate knowledge of the repercussions of battle to witness that the codebooks went overboard in a weighted bag.

Remarkably, the narrative briefly intersects with a more well-known story of President John F. Kennedy’s own rescue from the same island, though at a different location. The amount of coincidences and near misses, especially when comrades around Hugh don’t make it, amplifies the suspense until at one point you believe he might end it all with his own hand.

As the story opens, you may wade sluggishly through the detail of Hugh’s background and the ship’s construction before the action picks up in later chapters. “Then, without warning, a giant’s fist crushed his abdomen and slammed his testicles, his head was almost wrenched from his neck, and the seas around him roiled and bubbled as though a volcano were rising from the depths beneath him.”

The author is a little too cautious in sign-posting some of the critical turning points to cue the reader. The balance between telling a story that laymen can understand while staying true to Navy culture sometimes seems to be a struggle. On the whole, though, Harding balances the insider-outsider readers’ interests and captures both audiences.

Throughout, Harding bears out Hugh Miller’s lack of sympathy for the Japanese and their dead or dying. There is no attempt at humanizing the enemy. Perhaps the perspective rightly implants us within the mental architecture of a warrior, recreating the essence of Hugh even while leaving the Japanese participants a bit flat.

I, for instance, wanted to know what was written on the Japanese flag Hugh found among a dead soldier’s belongings. Instead, you will live in the head of a man who slowly watched his own men sink into the deep or lay in a shallow grave. Hugh is ready to punish, to repay, to reveal Japanese movements amidst his pursuit for rescue.

Read on, though, to discover the how and the “why” this survival history endures beyond the memories of the men who lived through it. The story contains the detail of an academic recounting with the adventure of a novel. The Castaway’s War is a pulse-pounding tribute to a highly decorated veteran whose story has finally been told for a wider audience.

AA Bastian received an Honorable Mention in the Writer’s Digest 75th Annual Writing Competition in the Memoirs/Personal Essay category for “Japanese Carp,” a critical look at her childhood as a military dependent in Okinawa. She has published “Double Facebook Profile: Egyptian Women Online” and is currently working on a narrative history of an unsigned letter written and published in 1854 that disturbed Thai-Western relations.

One journalist follows the recycling trade around the world.