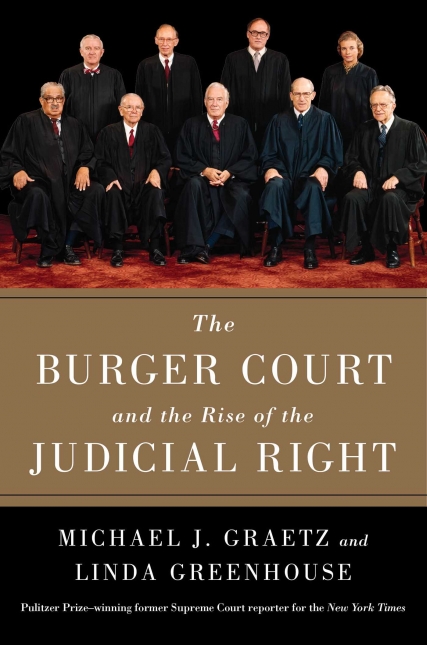 Warren Burger is likely to go down in history, if he hasn’t already, as somewhat of a failed chief justice. Even while in office, he was shown in the tattletale book The Brethren to be held in low esteem by his fellow justices. And a collection of essays published three years before Burger’s unanticipated retirement in 1986 provocatively labeled his tenure as The Counterrevolution That Wasn’t.

In their new book, The Burger Court and the Rise of the Judicial Right, Supreme Court scholars Michael J. Graetz and Linda Greenhouse describe this conventional wisdom and thoroughly debunk it. Contrary to the common view, the Burger Court was much more than a 17-year timeout between the liberal Warren Court era and the conservative eras of the Rehnquist and now Roberts courts.

Graetz, a professor at Columbia Law School, and Greenhouse, the Pulitzer Prize-winning former Supreme Court correspondent for the New York Times, show in insightful detail that the Burger Court shifted law significantly to the right and laid the foundations for the Rehnquist and Roberts courts to move further to the right still. (Disclosure: Greenhouse, who now teaches at Yale Law School, is a friend and colleague of mine.)

They begin by acknowledging that the Burger Court did not explicitly overrule the Warren Court’s best-known exertions of judicial activism. But they show that under Burger, the court undercut many of those well-known decisions and in fact explicitly overruled more than a few lesser-known precedents in such important areas as habeas corpus and labor law.

Having gained attention as a critic of the Warren Court, Burger was President Nixon’s obvious pick to succeed Warren in 1969. Nixon then had three more appointments in the next two years and, with those, gave the court a conservative orientation that has prevailed up until Justice Antonin Scalia’s death this past February.

Admittedly, the court did not shed its liberal bent overnight. The five Warren Court holdovers outlawed capital punishment in 1972, with Nixon’s four appointees in dissent. A year later, the court recognized abortion rights by a 7-2 vote in Roe v. Wade, with Burger and two other Nixon appointees, Harry A. Blackmun and Lewis F. Powell Jr., in the majority. Quickly, however, the court changed course by approving rewritten death penalty laws in 1976 and by starting to uphold restrictive abortion laws by the end of the decade.

In criminal law, the court began cutting back on the Warren Court’s Miranda rule on police interrogations as early as 1971 and continued trimming through the rest of Burger’s tenure. It also started to narrow the exclusionary rule and, in 1984, created a giant loophole by allowing the use of illegally obtained evidence as long as police had acted “in good faith.” And, less noticeably, the court undercut the famous Gideon right-to-counsel decision by establishing, in 1984, a demanding test for defendants to reverse convictions on the basis of inadequate legal representation.

In civil rights, Brown v. Board of Education remains good law and Burger himself wrote the unanimous opinion in 1970 upholding the use of busing as a remedy in desegregation cases. Just four years later, however, the court reversed course with a 5-4 decision that prohibits desegregation decrees across school-district lines. And, in another significant but lesser-known decision, the court, in 1976, established a demanding test to prove governmental bodies guilty of racial discrimination. Washington v. Davis requires proof of intentional discrimination, not just disparate racial impact — however strong the evidence.

Graetz and Greenhouse trace the court’s current solicitude for business back to the Burger era with decisions that recognized qualified First Amendment rights for commercial speech and open-ended political-speech rights for corporations. The Roberts Court’s decision in Citizens United, they say, was foreordained by the Burger Court’s 5-4 ruling in 1978 in First National Bank v. Bellotti to overturn a Massachusetts law preventing corporations from spending on state ballot measures.

Burger’s role in all this was often secondary and at times close to duplicitous, according to accounts that Graetz and Greenhouse have found by mining the papers of two of the justices in particular: Blackmun and Powell. (Burger’s papers won’t be opened to researchers until 2026.)

In the busing decision, for example, Burger’s opinion cited the lower court’s use of a 71-29 white-black ratio “as a starting point” for pupil assignment, but four months later, Burger said the decision actually disapproved the benchmark. In Roe v. Wade, Burger asked Blackmun to specify in his opinion for the court that the decision did not approve “abortion on demand.” Blackmun declined, but Burger said exactly that in a concurring opinion.

Burger announced his retirement in June 1986, 30 years ago this month. In a speech to an American Bar Association meeting two months later, Powell helped establish the still-dominant conventional wisdom that there was “no conservative counterrevolution” under Burger. In fact-check speak, Graetz and Greenhouse say, in effect, “mostly false.” As they write in their conclusion, “Warren Burger’s Court played a crucial role in establishing the conservative legal foundation for the even more conservative Courts that followed.”

Kenneth Jost has covered legal affairs as reporter, editor, and columnist since 1970. He is author of Trending Toward #Justice, the annual series Supreme Court Yearbook, and The Supreme Court A to Z. His blog is Jost on Justice.

This new book - Mommie Dearest with Chinese subtitles - has caused an uproar.

In his memoir, the acclaimed author creates a novelistic and immensely readable account of his early life.