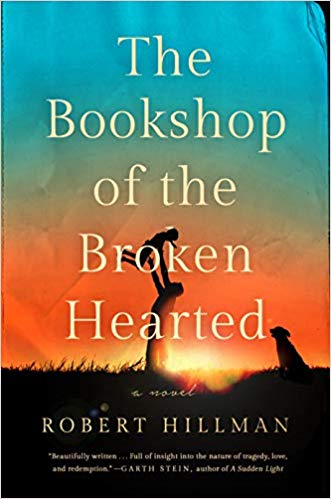 Robert Hillman’s The Bookshop of the Broken Hearted is transcendent. It surpasses the ordinary boundaries of what could be a trite exploration of love gone sour. Instead, it rises above sentimentality to a triumphant examination of history, politics, literature, and the pall and sorrow of grief.

There is a great deal of heartache in the novel. Like William Styron’s Sophie, sheep farmer Tom Hope from Hometown in rural Australia is forced to make an agonizing choice: He must decide between the woman he loves and the child he loves. The woman, Hannah Babel, 12 years his senior, is his second wife. The child, Peter, is another man’s son.

It’s 1968. Tom and his first wife, Trudy, have been married only one year and 10 months when she unexpectedly leaves him. Her brief explanatory note simply says, “I’m leaving. Don’t know what to say.”

Tom is certain he must have done something wrong and begins a lengthy list of what he will do differently if she returns: “Picnics!! Light fire kitchen first thing!! Tell her about good things she does. Like when she doesn’t burn the sausages.”

After the child is born, Tom bonds with him immediately. Even when the boy is young, he learns to share farm chores — tending to the sheep, cutting back trees, repairing vehicles. Trudy, however, is not content. She abandons both of them.

Hillman manages to wedge all of this into only the first chapter. By the second, Peter is 5 and Trudy trudges back again, this time to claim Peter and take him to a religious commune, the Jesus Camp.

Tom is bereft. His life appears to be in ruins until Hannah, the “Jewish lady from the continent,” appears. When Tom wanders into Hannah’s downtown bookshop of the title, both their lives change. The shop needs physical renovation. Tom and Hannah need emotional rehabilitation.

Tom offers his welding skills to repair a hanging sign. He stays to build shelves. Their business relationship escalates quickly into a romantic involvement, but not without complications.

Hannah has her own harrowing backstory which is disclosed in a series of six chapters interspersed throughout the novel, flashbacks from 1944-1946 until her arrival in Australia in 1966. Her shocking history involves surviving Auschwitz and losing a husband and son. Graphic, brutal concentration-camp scenes are gut-wrenching to read.

When Hannah loses her second husband during the 1956 Hungarian revolution, she vows never to love again. Not another man, not another child. She decides to migrate. Taking a circuitous route via Canada, she settles on Australia, although all she knows of it is the writer Patrick White, “Oh, and kangaroos.”

She is soon to learn a great deal more about her adopted country. In Hometown, she makes friends with neighbors. She earns an income by giving piano lessons. She dreams of opening a bookstore.

Tom tells her that “People in Hometown don’t read books.” It’s probable that “not half a dozen…had ever opened a book and got away with it.” Hannah takes it as a challenge to change those habits, one reader at a time, beginning with Tom, who has “only read one book for grown-ups in his life.” Hannah introduces him to Great Expectations.

She persists in opening the bookshop. She shelves books without a “democratic bias,” arranging them by title rather than author. She “didn’t want sections of shelves turned into colonies of titles by the same author. Writers had to muck in together.”

When that means putting The Making of the English Working Class next to The Making of Americans (“a book Hannah disliked”), she adds a buffer between them, Making Your Own Jam.

The bookstore becomes a watering hole for the community. It is a library of love, a bookstore for incipient romance. Tom moves from Dickens to Dostoevsky, Turgenev, Solzhenitsyn, and to a local, Thomas Keneally.

Then a natural tragedy strikes that affects everyone, and Trudy intrudes again. Back for Peter, she imposes a fateful decision which culminates in Tom’s moral dilemma. If Tom accedes to it, Hannah may leave him. If he doesn’t, he may lose Peter.

The nail-biting conclusion of The Bookshop of the Broken Hearted subsumes catastrophe. Its exultant resolution underscores the optimistic belief that “the past exerts itself to influence the future.” Hillman’s vivid observations of regional details, keen perceptions of local customs, absorbing storyline, and sympathetic characters make the novel impossible to put down.