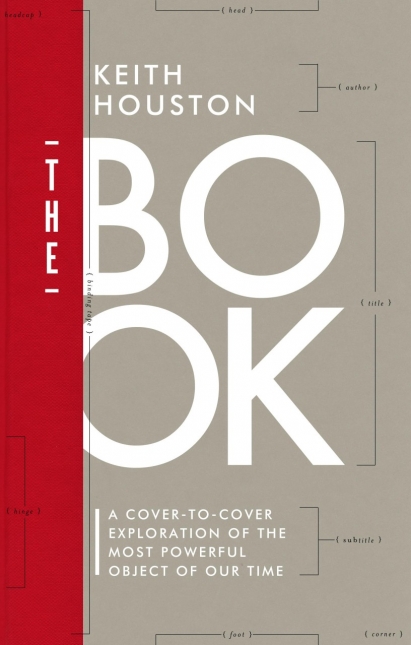 The Book is meant to be read in physical, printed form, and it promises to be an object of beauty. The galley proofs indicate that the final product will not only contain detailed reproductions of illuminated manuscripts, it will also offer samples of both papyrus and parchment. Oh, snap, Kindle! Mic-drop on you, iPad/iPhone/Android!

It’s clear that the meteoric rise of e-readers drove this project forward, since The Book itself doesn’t provide new or revelatory information. It doesn’t need to, though; it just needs to collect readers who understand the sensual and emotional dimensions tied up in this oh-so-physical object.

As author Keith Houston says in his introduction, “Find the biggest, grandest hardback you can. Hold it in your hands. Open it and hear the rustle of paper and the crackle of glue. Smell it! Flip through the pages and feel the breeze on your face.”

As with other quaint analog objects whose technology-induced death has been declared prematurely, the printed book doesn’t appear to be going anywhere. That we’re not in imminent danger on that front, however, doesn’t detract from the enjoyment of what is both a scholarly and light-hearted review of everything you want to know on the origins of written language, the media upon which it is captured, and its methods of illustration, reproduction, and distribution.

The Book reminds us of what we may have forgotten, or what we’ve failed to consider. For instance: Early paper was made of linen pounded from worn-out undergarments. Hence, the bragging still associated with fine stationery of its rag content. And parchment is made of livestock skin, the bloody implications of which Houston drives home with force. (Hands-down best quote: “Books are rectangular because cows, sheep, and goats are rectangular too.”)

The origin of such terms as upper- and lower-case, italics, foolscap, ostracize, stereotype, museum, protocol, syllabus — perhaps we’ve heard it all before, but it’s fun to go through it again from the beginning, and the author is a charming tour guide.

We learn that the Frankfurt Book Fair was already up and running in 1454, when Gutenberg sent samples of his printing to display at the annual event; that Charlemagne was illiterate and apparently incapable of mastering how to write his own name; and that standard paper sizes were not finally set until 1995.

What Houston’s account drives home is how stunningly labor-intensive the early production of papyrus, parchment, paper, and all the other accoutrements of writing and printing truly was. His detailed accounts of these processes leave the reader feeling sympathetically exhausted and wondering how more than a handful of books was ever produced before the advent of digital typesetting.

It was these exhausting steps that drove each successive improvement in the paper-making/printing processes, and while it’s difficult to follow the descriptions of, say, how the original Fourdrinier machine operated to produce continuous rolls of paper, Houston’s stories of the people who imagined, designed, created, failed in, and perfected each of the evolutionary steps toward the modern book are fascinating.

Readers are introduced to Cai Lun, a eunuch in the imperial court of the Han dynasty, who is credited with the invention of “thin, feltlike sheets made from vegetable fibers that had been pounded, macerated, and sieved in a pool…then pressed and dried to a smooth finish” — the world’s first paper. Producing more than a few sheets took huge amounts of labor.

Houston also explains that “Gutenberg was not the father of printing so much as its midwife,” since he did not invent movable type but accomplished all the heavy lifting to make it a viable component of the printing process.

The removal of one bottleneck in the production process inevitably revealed the follow-on bottleneck, around which the next innovation would concentrate. Each innovation was aimed at streamlining paper-and-print production in order to scale it up, making it faster and more efficient.

One illustrative story recounts how John Walter, owner of the Times of London, conspired with inventor Friedrich Koenig to construct a mechanically driven press in order to secretly print the paper’s November 29, 1814, edition.

The secrecy was necessary to prevent sabotage by the paper’s pressmen, since the new press was able to produce 1,100 double-sided sheets per hour, compared to the normal output of 200 single-sided sheets on the existing Stanhope presses. Walter’s willingness to pay extraneous workers full wages until they found other employment removed some of the sting of instant obsolescence.

And here we are at the point where virtually all bottlenecks have been eliminated, including those introduced by publishers. With no physical media needed to produce a book, new ones are being pumped out at rates unimaginable only 10 years ago. There’s no arguing the wondrous convenience of e-books — anyone who has run out of reading material moments before boarding a trans-Pacific flight understands the lifesaving qualities of a Kindle — and if people buy and read more books because it’s so easy to do with an e-reader, I as an author am hardly going to find fault with that.

But Houston knows, as do those of us who keep indie bookstores thriving well beyond their predicted expiration date (1998’s “You’ve Got Mail,” anyone?), that a physical book is not a commodity but an experience, a full-on feast of the senses, a tactile joy. Try putting that in your iPad.

A rare look at an evangelical woman’s attempt to expand her world in the early 1800s.