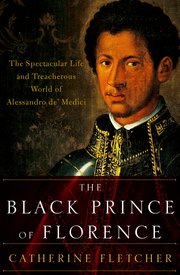 Florence during the Renaissance was not a tranquil city. Feuds that started with words continued in the streets with knives. Suspicious deaths were assumed to result from poisoning — often correctly. In the first pages of The Black Prince of Florence, Catherine Fletcher describes the 1537 murder of her subject, Alessandro de’ Medici, the first duke of Florence.

Alessandro would not appear to have been a likely candidate for that office. He was born in 1511 or 1512. His parentage has been debated. Although some writers claimed he was the son of Pope Clement VII, Fletcher believes the preponderance of the evidence suggests that his father was Lorenzo de’ Medici, a grandson of Lorenzo the Magnificent. Alessandro’s mother was probably a slave or servant, most likely of African descent.

A crucial factor in Alessandro’s rise was the lack of a legitimate male Medici in his generation. His branch of the Medici family had dominated Florence for a century. (They were occasionally ousted but made their way back.) Illegitimacy was a stumbling block to advancement, but not as big a problem as having a parent of low status. Ippolito de’ Medici, born about a year or so before his distant cousin Alessandro, was also illegitimate, but his mother was a noblewoman and his father the youngest son of Lorenzo the Magnificent.

The first Medici pope, Leo X, had made his nephew Ippolito an archbishop in 1517. Although a 7-year-old was hardly expected to exercise his office, the benefice provided a very good income. In 1522, young Alessandro was granted the tiny duchy of Penne by Emperor Charles V, thus becoming the only Medici duke at that time.

In 1523, a new Medici pope was elected: Clement VII. With one young relative in the church and the other with a toehold in the secular world, Clement was on his way to securing continuing power for his family. There were rumors that Ippolito might be made a cardinal; that he might instead marry Margaret, the illegitimate daughter of Charles V; that he was being groomed to dominate Florence, which was nominally a republic.

In 1529, the first rumor became fact: Ippolito was made a cardinal. That same year, the pope and the emperor settled various problems between them and agreed that the emperor’s daughter Margaret should be betrothed to Alessandro. These developments changed what had apparently been a companionable relationship between Ippolito and Alessandro to one of rivalry, as Ippolito wanted to leave the church and eventually take charge of Florence. That prize was soon to become Alessandro’s, but it was one he enjoyed for only a few years.

With the onset of this rivalry, the book picks up its pace. The cast of characters does not narrow, but the reader can concentrate on the major players: emperor and pope, Ippolito and Alessandro. As the author sets the scene in earlier chapters, it is essential to refer to her genealogical tables, glossary of names, and timeline because she introduced a dizzying number of names. (Generations of Medici were exceedingly and confusingly fond of the name Lorenzo.) Now the focus is on two young men who owe their fortune and future to the two most powerful people in Europe.

There is yet another player of significance in this story: the historical record. Alessandro’s assassin, Lorenzino de’ Medici, wrote an Apology justifying his act as tyrannicide. This view took hold in the popular imagination. Fletcher notes that “it was the misfortune of Alessandro de’ Medici to be assassinated twice: first with a sword, then with a pen.”

As the first duke of Florence, Alessandro had enemies, especially those Florentine exiles who wanted their city to be a republic rather than a duchy. (There had been several plots against Alessandro prior to his murder.) As to the written evidence against him, the record is suggestive but not conclusive. Was he so ashamed of his mother that he had her killed? Did he have Ippolito poisoned? Was criticism of Alessandro unfairly harsh since Florentines were unhappy with rule by a duke? Was it convenient for Cosimo de’ Medici, the next duke, to let discontent focus on his predecessor?

The author’s analysis of the material written about Alessandro is absorbing, as is her afterword about his ethnicity. Alessandro’s racial makeup was of less importance in his lifetime than it became to those who wrote about him in the 19th and 20th century, reflecting the racism of their own time.

Fletcher bemoans the paucity of Alessandro’s own papers, but when she does have a lot of material, she includes it — there are many lists of clothing, furniture, and gifts. These give a sense of the magnificence of Renaissance high life but cannot take the place of good evidence to resolve issues the author raises about Alessandro’s character.

Perhaps one of the best observations on Alessandro’s life and the political machinations of his time appears in a letter written shortly after his death: that Alessandro “bore the burden of Clement’s sins, not his own.” Fletcher’s opinion of Alessandro is favorable. She states that “Alessandro fulfilled the expectations of a Renaissance prince rather well” and concludes that he “had done much to establish a stable state and a splendid court during the short years of his rule.”

Alice Padwe has reviewed fiction, history, and memoirs and has edited all sorts of books from college texts to spy thrillers.