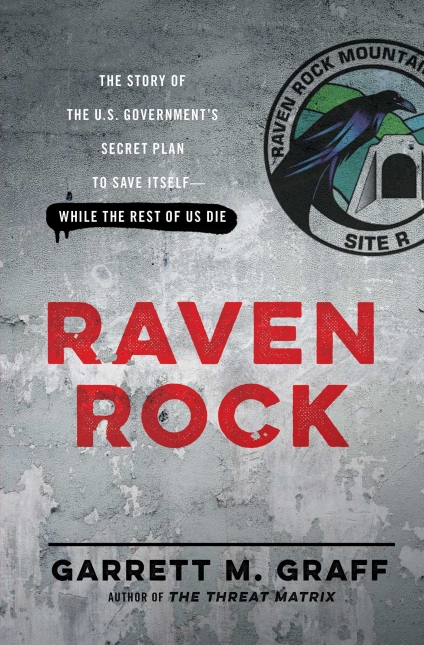 One of the oddities I face as a writer after 35 years in national security is stumbling across the names of people I knew in the business. Raven Rock regularly surprised me by referencing men I worked under during my spy days. Most prominent were William Odom and Robert McNamara. Author Garrett M. Graff’s rendering of them matches my memory.

But these names are among scores cited. Raven Rock is more of a reference work than a book for leisurely reading. The “selected” bibliography — which means that it doesn’t include every source used — is six pages, the index 23, and the “Notes” 81.

In addition, every few pages, the reader finds footnotes marked by an asterisk (*) or a dagger (†); these notes offer additional information rather than source data. The book also includes dozens of photos of the personalities involved and places described. It’s a long, detailed, and beautifully researched volume.

The text is a meticulous history, starting at the beginning of World War II, of the U.S. government’s efforts to assure “continuity of government.” That is, continuing governance during a war in which the seats of government and the people who govern are rendered inoperable. The most elaborate means of survival followed the acquisition of nuclear weapons by the USSR and involved mobile command platforms (airborne and seaborne), as well as hardened redoubts capable of withstanding first the atom bomb, then the hydrogen bomb.

The two principal safe retreats were Raven Rock, in Adams County, Pennsylvania, just north of the Maryland state line and not far from Camp David; and Mount Weather, 50 miles west of Washington, DC, in the Blue Ridge Mountains.

Almost of equal importance was the Greenbrier, “One of the nation’s poshest and most storied mountain retreats,” in White Sulphur Springs, West Virginia, some 200 miles southwest of the capital. All three sites — and a variety of others — required digging deep into mountains to establish protection from a thermonuclear blast.

Equally important in the “continuity of government” scheme was the protection of “designated survivors,” presidential successors who could assume the highest office immediately if the incumbent were killed in an enemy blitzkrieg.

That meant assuring that a named successor would not attend events that might be subject to attack, such as a presidential address, a joint session of Congress, or a swearing-in of the president. The chosen successor, by the 1990s, “would receive a full Secret Service detail, and a White House aide would arrive with a copy of the Football in case the unthinkable happened and the ‘designated survivor’ needed to be ready to launch the nation’s nuclear weapons.”

The “Football” is “a little black bag” technically known as the “presidential emergency satchel.” It contains the means to launch nuclear weapons without delay. As Graff explains, “The modern version of the Football is less a satchel than a portable safe — a rugged aluminum briefcase, covered in black” that weighs 45 pounds. It goes everywhere with the president.

The history of the U.S. government’s struggle to be prepared to remain operational despite a calamitous strike includes all three branches, a plethora of agencies, and governmental bodies other than federal. Graff’s text is resplendent with code names and acronyms, and although the author carefully explains each the first time it occurs (and occasionally reminds the reader of the underlying meanings), I had considerable trouble remembering what stood for what.

After the breakup of the USSR (1989-1991), U.S. work on continuity-of-government waned, but the attacks of September 11, 2001, led to a redoubling of the effort. Much of that effort’s current status is heavily classified, so Graff is not able to provide much insight into the present-day arrangements.

Moreover, the text of the book was presumably completed before President Trump took office. Consequently, what he may be doing with respect to survival and presidential succession remains unknown. We do know that the Football, like his shadow, goes everywhere with him.

Overall, Raven Rock is a satisfying read, especially for a student of U.S. governmental history. My only real criticism is the title for including the words: “While the Rest of Us Die.” First of all, the prospect of protecting some 320 million people during a nuclear holocaust is hopelessly unrealistic and was never the intent of those designing the continuity-of-government strategy. Second, the book never addresses the feasibility or desirability of such an effort. I suspect, having been through melees with publishers over titles, that Simon & Schuster altered Graff’s original title.

One question still haunts me after reading Graff’s narrative: Did Ronald Reagan really seriously contemplate a first-strike nuclear assault against the Soviet Union? Press reports of the period hint broadly that he did. And nothing in Graff’s story either contradicts or confirms the possibility. I’m left to wonder.

That speculation leads to another thought. Throughout the history of the continuity-of-government operations, the wisdom and firm leadership of a variety of presidents and other statesmen have shaped plans and preparations. But we’ve never before had a president like Donald Trump. I can’t help but ponder what may be going on behind the scenes now.

Tom Glenn’s most recent novel, Last of the Annamese, is set during the fall of Saigon which he survived. He spent 35 years in U.S. national security before becoming a full-time writer.