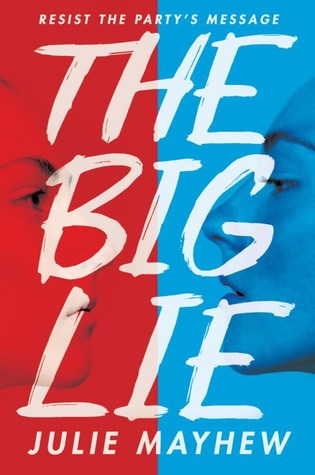 As a reviewer, there is a temptation to couch critiques in modest language to avoid the appearance of misplaced effusion. To wit: It is far easier (and safer) to write that Julie Mayhew’s The Big Lie is the kind of YA literature that is important. As opposed to saying that The Big Lie is an important YA novel.

But The Big Lie is an important YA novel.

In fact, the importance of The Big Lie is magnified by the current political climate in both the United States and throughout the world. This is a perfect time for The Big Lie, and I suspect the publisher saw a ripening market after the last presidential election (which might explain why it’s being released in the States now — two years after its British debut).

The Big Lie is a welcome addition to the canon of “what if” historical fiction where events and outcomes are changed and tweaked to send history down a different path. The path Mayhew chooses: What if Germany had won WWII?

Seventy years later, England is still occupied by the Germans and has become part of the Third Reich. Hitler’s master plan for an Aryan race is imposed on the English, and the genetic ideal of blonde hair and blue eyes dictates marriages and procreation.

This is the only world that protagonist Jessika Keller knows. Her father is well-positioned in the government, which means they get to live in a nice house in the nicest of subdivisions. Her father also has a say in which other families get to live there, so Jessika faces resentment at school, which confounds her since she is just living a good German life.

She does as she’s told but, more importantly, she believes everything she is told until a fellow teen, Clementine, moves in next door.

Clementine is confident, beautiful, and not an unflagging fan of the German government even though her father works with Herr Keller. Jessika spends her free time at Clementine’s house and, when they hang out in Clementine’s bedroom, Clementine speaks openly of her desire for freedom from the oppressive government.

An upcoming concert by an American pop singer in London has Clementine giddy that the proverbial wall is coming down. All things American are forbidden, and the concert will be the first taste of America in England since before the war.

Clementine knows all about both the singer and America, which Jessika finds scandalous. Clementine has an unauthorized recording of the musician, and her family also hides a computer (strictly verboten) and has made outside contact with people in America.

Jessika knows that she should report these details to her father, but Clementine convinces her that they are harmless. Jessika chooses to believe her, partly (or mostly) because she is falling in love with Clementine.

Of course, homosexuality is prohibited by the Nazi government, and anyone suspected of being gay is sent to a doctor who “cures” them with a regimen of pills and shots that reduces the patient to a shadow of who they once were.

Mayhew mines the conflicts within Jessika very well and, in her protagonist, presents an identifiable heroine: a girl who wants to please her father and country even as the profound disconnect between her world and the one her friend shows her comes into sharp relief, such as during the concert:

“After our songs and marches (were we the best? In the end it didn’t really seem to matter) Herr Dean gave his speech. Onstage, we weren’t allowed to move or react, but the girls in the front of the crowd, the girls specially selected to stand on the raised stone sections to our left and right, did enough of that for all of us. They clutched one another and jumped up and down, squealing and gasping. We saluted and gave our victory cries in unison, our fingers quivering, while behind us came unmistakable whispers of ‘Jesus Christ’ and ‘fucking hell’ in weird elastic accents.”

Jessika’s father was not in favor of the concert taking place, but Clementine sees it as the opportunity to lift the veil on the oppressive regime they live under. This conflict between Jessika’s father and his beliefs versus Clementine and her hoped-for freedom unfolds in dramatic fashion, and Jessika is left to make the most difficult decision of her young life.

Once upon a time, a cautionary tale about Nazis set in present-day England might’ve felt like a reach. But now? Not so much. When Barack Obama earnestly warned an audience about the echoes of Nazi Germany in a recent speech, we must appreciate that the horrors of the past may not lay dormant forever. To believe otherwise would be to believe a big lie.

A 15th-century wife embarks on a revolutionary pilgrimage.