The Darwin Affair: A Novel 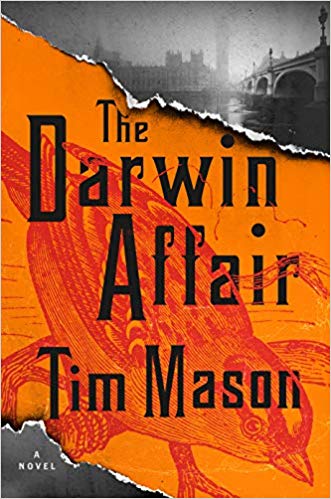 Science, the stuff of the cosmos, quarks, and divergent species crawling from the primordial ooze, has always divided us. Freud and Einstein knew this, as do contemporary climatologists, who are currently as popular in some quarters as tornados at a tent revival.

When he published the seminal On the Origin of Species in 1859, Charles Darwin also learned this lesson. While his book was an immediate commercial success, his radical ideas about natural selection and variation would still make him a pariah among the faithful and some intellectuals. Darwin’s book was even banned from the library of his alma mater Trinity College, Cambridge. That’s some seriously tough love for a little island research that changed the course of biological science.

In The Darwin Affair, first-time novelist Tim Mason uses the release of Darwin’s book and Queen Victoria’s court as a backdrop for what turns into a thrilling mashup of The Devil in the White City and The Hound of the Baskervilles. At its black heart, the book is a serial-murder mystery. Mason, who’s had a distinguished career in theater (he earned a Kennedy Center Award for New American Plays), imagines a world where those who believe in scientific sanctity and truth are pitted against deniers.

The queen and her German hubby, Albert, are believers; they adore Darwin and consider giving the scientist a knighthood. The deniers — including real-life characters Bishop Wilberforce and biologist Thomas Huxley — view the scientist’s new world order as an abomination. They can’t fathom an England where Evolution can swap absolute power for universal equality. All of which makes the royals’ affection for Darwin problematic: With knighthood comes fame, and with fame comes reconsidered belief systems among the great unwashed.

In other words, for those who have skin in the origin-of-man game, the king and queen need to go. Why not try to knock them off before they can bestow knighthood on the Bard of the Galapagos? And why not hire a psychopath, who’s part amateur surgeon, part human-ear collector, to do the deed? His name is Decimus Cobb, and he’s one of the most fully realized terrors committed to print this year.

Before his designs on the monarchs take shape, Cobb targets London’s underclass — delivery boys, prostitutes, street urchins, hustlers — with wanton savagery. He kills with precise, scalpel-laced innovation, a brand of evil that’s at once gratuitous and measured. Cobb “used his own tools, some of which he invented himself” for both surgery and murder, Mason writes. “In his hands, they were a blur of brass and silver, splashed with scarlet.”

Before our disheveled antihero tracks down Cobb, Mason leads us and Inspector Field into the dark, desperate corners of London. We see homeless boys dispassionately fish bodies from rivers as they search the corpses’ pockets for shillings. We learn about a foreboding mansion with boarded-up windows harboring victims of Cobb’s kidnapping habit.

We go inside the world of body-snatchers, who dig up the graves of the recently deceased and sell the contents to the medical community, which badly needs cadavers for dissection (there’s always a shortage, we’re told). Mason writes:

“A favored technique involved the nocturnal digging of a relatively small hole near the top of the burial site, descending and opening that end of the coffin and pulling the corpse headfirst. Less dirt was disturbed this way, and the diggers’ tracks could more easily be covered. All of this had to be accomplished as soon after the burial as possible for obvious reasons, especially in the warmer months.”

Along with the novel’s nail-biting pace, there’s a welcome gravitas that grounds everything. Nuanced accents from all strata of London, circa 1860, add rich flavor. Historical backstory about characters like Karl Marx (who pops into a few scenes), Dickens, and Robert Fitzroy, who captained Darwin’s HMS Beagle, provide believable context.

Mason clearly has a good time conjuring what could have happened in the wake of an elegant, world-altering theory. It’s effortless storytelling and makes the implausible real. Granted, this is a bloodied yarn, but, like all great detective work, the threads leading to discovery can’t be ignored.

Washington, DC, writer Michael McCarthy is still trying to evolve into someone who can prepare a simple family meal without triggering a smoke alarm.