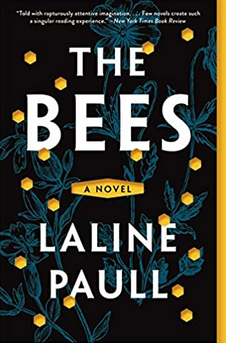 Sex, intrigue, battles, betrayals, blood, death — and flowers. Simply put, Laline Paull’s The Bees is Game of Thrones in a hive — with flowers. The novel has been described as The Handmaid’s Tale meets The Hunger Games, and with its plucky young heroine from the bottom caste of a rigidly hierarchical society defying a fertility-based authoritarian regime, that description rings true.

The protagonist is Flora 717, born to the lowly sanitation caste in an orchard hive. Large and deformed, she’s slated to be euthanized, but a priestess bee saves her for her own nefarious purposes. Whereas others of her caste may only clean, Flora’s extraordinary strength and special skills earn her the right to work with bees of higher castes in the nursery and out foraging for nectar and pollen. The close third person point of view allows the reader to work alongside Flora and experience the intricate system of rewards and punishments that foster cohesion of the hive.

Despite Flora’s hard work, her caste always trumps her contributions. Indeed, no single bee is indispensible when the security of the hive depends on conformity. Flora’s commitment to the hive is put to the test when she lays an egg, the ultimate sin against the Holy Mother Queen bee. The Queen is the only bee allowed to bear children, and Flora must decide whether to follow her own maternal instincts or sacrifice everything for the colony.

Paull began studying bees in honor of a beekeeper friend who passed away. She became fascinated with their world, and in her novel she imbues the bees’ mating, reproductive, feeding and worker management systems with a claustrophobic brand of bee-Catholicism. There is incense in the form of pheromones; there is rapture in the form of chemical bonding with the Queen; and there are priestesses and fertility police to keep everyone in line. “Accept, obey, serve” is the oft-repeated Orwellian mantra in Paull’s novel that epitomizes the relationship of bee to state.

The Bees is classified as a Young Adult (YA) Crossover book, and it appears to fit that bill. It’s a quick read with an earnest tone and enough action and cliffhangers to keep the reader going. The main character is a young rebel who doesn’t fit into any of the roles society has carved out. She is conflicted, seesawing between intense devotion to the Queen and yearning for her own young. This central conflict is, in part, where the “crossover” lies: Instead of conjuring up what would be an inaccurate love affair between a spunky protagonist and a hunky male bee from the same hive, Paull derives much of the tension from Flora’s maternal instinct, a variation on the desire for independence that drives most YA fiction.

Paull describes the flowers of the field and the intricate layout of the hive in rich detail, weaving in descriptions of the different scents bees use to communicate as well as sights like an ant tending its herd of aphids. Some YA readers may be tempted to fly over details like this (no pun intended), but Paull keeps the action going by peppering her flowery prose with descriptions of bee heads being ripped off and guts clinging to the claws of their enemies the wasps.

“[S]he felt its desire for her straining from its roots...She climbed up and positioned herself over one of the creamy white florets, and the contact of her feet on the flower’s virginal petal made them both tremble. Flora held it softly then sank her tongue into its depths. The exquisite taste sparkled through her mind and body like sun on water, and she drank until each floret was empty.”

Here’s a towel; I’ll give you a moment.

Laline Paull has managed to make bees sound both compassionate and ruthless, trusting and conniving, sterile and sexy. The Bees is in many ways a period piece, with vain knights (drones) lounging, ladies-in-waiting preening, and priestesses praising Holy Mother while moving the lower caste pawns around to their own ends. The lower castes keep their heads down, but still watch and listen, keeping each other’s secrets while exchanging a few ribald repasts with forbidden drone partners. Admittedly, a mention of embroidery and frequent references to bees using their “hands” might take a reader out of the hive for a moment. On the whole, however, this period setting combined with the nightmarish authoritarian society Paull has constructed makes for an inventive and slightly unsettling read. You will never look at bees the same way again.

Tara Campbell is a Washington, DC-based writer of crossover sci-fi. With a B.A. in English and an M.A. in German Language and Literature, she has a demonstrated aversion to money and
power. Her work has appeared in the Washington Independent Review of Books, Potomac Review Blog, Hogglepot Journal, Lorelei Signal, Punchnel’s, GlassFire Magazine, the
WiFiles, Silverthought Online, Toasted Cake Podcast, Litro Magazine, Luna Station Quarterly, Up, Do: Flash Fiction by Women Writers and T. Gene Davis’s Speculative Blog.

A smart meditation on despotism disguised as a fantastical tale.