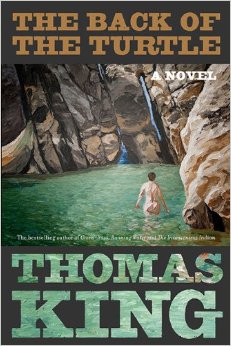 This, I am chagrined to admit, was my first thought upon opening the package containing Thomas King’s The Back of the Turtle. I’d been looking forward to reading the novel, King’s first in 15 years, since hearing a CBC interview with the celebrated First Nations author — so much so, I’d neglected to check the page count before volunteering to review it.

As soon as I opened the book, however, all my reluctance disappeared. King’s wit and eloquent prose carried me effortlessly through those 500+ pages. One might think a novel by an  indigenous writer about a manmade environmental disaster would be a painful read, heavy with  recrimination of the dominant culture and the destructive nature of capitalism. Not so with King, who combines environmental destruction with dark humor to create a story that, paradoxically, hinges on hope.

Scientist Gabriel Quinn abandons his job at Domidion International in Toronto and heads for the Smoke River Reserve in British Columbia, where his mother and sister used to live. This is no reunion: His family was among over a hundred casualties of a virulent bacterial agent that obliterated all life in and around the Smoke River — an agent that Gabriel helped create.

Driven by guilt, he plans to strand himself on high rocks at the reserve’s beachfront and drown in the rising tide. In the first of many magical touches in the novel, a girl appears out of nowhere in the pounding waves, and Gabriel is saved by having to save her.

Unexpectedly still alive, Gabriel encounters the few remaining members of the hollowed-out community: Sonny, a mentally impaired boy who lives in an abandoned motel and scavenges on the beach; Mara, a feisty artist who has returned from Toronto to memorialize the dead by  painting their portraits; and Nicholas Crisp, a crafty old man with a seafaring vocabulary and a generous heart. And then there is the town dog, Soldier, who stands by each of them in turn to impart comfort and his special brand of non-verbal wisdom.

All of the characters are, in a sense, waiting. Sonny waits with a fractured understanding of whether or not his father is still home; Mara lives in limbo in a rented house on the edge of the reserve; and Crisp is the link to the past with an eye to the future, waiting for something to happen, even if he isn’t sure what.

The reserve is often cloaked in fog, beautifully reinforcing the characters’ sense of suspension. Quinn is a passive protagonist, from his inactive approach to suicide to his tendency to follow Mara around and do her cheeky bidding. Mara, despite her snappy bits of dialogue with Quinn, is often pensive and driven by a sense of guilt about having lost her connection to home.

This is not a book that whips the reader around with explosions and sudden revelations. Rather, like the Smoke River, it laps gently at your feet, its short and eminently readable chapters luring  you deeper and deeper in until you realize you’re trapped in the current — and don’t at all mind letting it carry you along.

But it is not all fog and water. King gives us sunlight, as well, moments of clarity and sparkling humor. Dorian Asher is the self-absorbed CEO of Domidion International, the firm responsible for “The Ruin” at the Smoke River Reserve. He strides purposefully through the book, charismatically ignoring ethical issues while dealing with the PR and profit implications of the  ecological nightmares lurking in his company’s past and present.

I enjoyed Asher, even rooting for him as I found myself uncomfortably rooting for Humbert Humbert in Lolita. Asher is a dynamic individual, undaunted by obvious wrongdoing, completely missing the point with élan. Just before he is interviewed by TV news anchor Manisha Khan about an industrial accident at one of Domidion’s facilities, he indulges in a marvelously off-task train of thought:

“Dorian watched Khan work. The woman was sincere and efficient. She exuded power and compassion, with a strong sensual undertone. And she knew how to dress. Tonight Khan had selected a simple business suit with a dark skirt, a plum blouse, and a soft grey jacket with black and green flecks. Franco Mirabelli perhaps. Or Vivian Shyu. They would look fantastic together on the set.” We laugh at Dorian’s obliviousness while smiling and shaking our heads at his absolute confidence.

Dorian is, however, no mere cardboard villain. We don’t completely condemn him because we also know his vulnerabilities. We see him sweat and shake from a mysterious illness. We witness his distant relationship with his wife and his doubts about his legacy. There is even vulnerability in his ostentatious spending — he feels secure behind the glass of private cars and boutique  stores rather than out in the noisy unpredictability of the street.

King brings humanity and light to the starkest human dilemmas and intractable problems our environment faces. As he was quoted in the CBC interview: “To be angry about something doesn’t mean anyone is going to listen to you.”

In this insightful, gentle, and satisfying work, King’s humor and empathy compel us to listen.

Tara Campbell is a Washington, DC-based writer of crossover sci-fi. With a BA in English and an MA in German language and literature, she has a demonstrated aversion to money and power. Her work has appeared in the Washington Independent Review of Books, Potomac Review Blog, Hogglepot Journal, Lorelei Signal, Punchnel’s, GlassFire Magazine, the WiFiles, Silverthought Online, Toasted Cake Podcast, Litro Magazine, Luna Station Quarterly, Up Do: Flash Fiction by Women Writers, T. Gene Davis’ Speculative Blog, Master’s Review, Sci-Fi  Romance Quarterly, and Latchkey Tales, Elementals: Children of Water. Follow her on Twitter at @TaraCampbellCom.