The Age of Entitlement: America Since the Sixties

Solid writing and research aside, this jeremiad about our changing national landscape reveals the author’s bitterness. 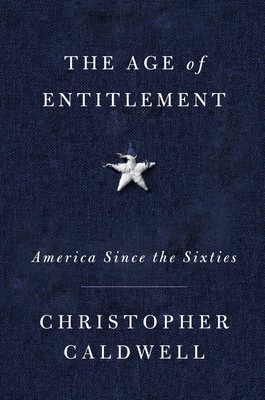 In the 18th century, the Age of Enlightenment illuminated the world of ideas throughout Europe, stretching as far as America, where Thomas Jefferson adopted some of its ideals when writing the Declaration of Independence. Perhaps Christopher Caldwell aspired to achieve similar status by calling his book The Age of Entitlement.

In it, he explores the last five decades of a U.S. cultural upheaval spurred, he claims, by the Civil Rights Act of 1964 and the Voting Rights Act of 1965, legislation he sees as “a model for overthrowing every tradition of American life.”

Caldwell’s revolution starts with the assassination of John F. Kennedy in 1963, the event that propelled JFK’s successor, Lyndon B. Johnson, to initiate Civil Rights legislation. “[This] ideology, especially when it hardened into a body of legislation, became, most unexpectedly, the model for an entire new system of constantly churning political reform.”

Each of these sections contains bite-size subsections arguing aspects of Caldwell’s premise that “civil rights had been sold to the American public” under false pretenses, causing incalculable wreckage to society:

As a conservative, white, male graduate of Harvard, Caldwell writes to the right, occasionally to the left, and sometimes swerves center as he cites lawsuit after lawsuit to make his points, one of which actually suggests that maybe Southern segregationists were correct all along.

His book, which relies on much of the conservative journalism he’s published in the Financial Times, the National Review, and the Weekly Standard, reads like the lamentation of an anguished man who sees his world slowly crumbling beneath him.

Not all conservatives will applaud, particularly those who marched in the Reagan revolution. For Caldwell lambasts Ronald Reagan on the issue of “mass immigration,” which, he maintains, “stands perhaps as [the president’s] emblematic failure. Reagan threw open the floodgates to international immigration while stirringly proclaiming a determination to slam them shut. Almost all of Reaganism was like that.”

What Caldwell grieves, progressives might celebrate, even the messiness of change and the discomfort of adjustment. He rails against political correctness, considers it an affront to have to call black people African Americans, and resents the federal holiday dedicated to Martin Luther King Jr.

He lambasts his alma mater for ruling in 2016 that professors presiding over Harvard’s undergraduate houses be called “faculty deans” rather than “house masters,” sarcastically wondering if “kids would be unable to distinguish their house master from a slave-driving antebellum overseer.” Strange that a skilled writer like Caldwell, who lives by the power of words, can’t acknowledge the degree of civility Harvard conferred with its small change.

The author becomes particularly overheated when he claims that, by embracing political correctness, Americans have “inadvertently voted themselves a second constitution,” and it’s this second constitution, with its P.C. laws, “nurtured by elites in all walks of life,” that currently prevails. He ridicules diversity as if it’s nothing more than a Mercedes Benz, “a marker of money, class, and power.”

He even chides CNN founder Ted Turner for ordering his company’s personnel to refer to things outside the U.S. as “international” rather than “foreign,” ignoring that “international” suggests a broader, more cosmopolitan embrace than “foreign,” which conjures all things strange, unfamiliar, and alien. (That last sentence probably consigns me to the P.C. circle of hell.)

While much of this provocative book — with its conservative critique of the last 55 years in America — is interesting, it never rises above the author’s anger or overcomes his fury with the people of color, women, and gays who’ve challenged the system and won the changes that have rattled Caldwell’s world. He vents his spleen at a society that is not standing still and remaining soldered to tradition, but, in his view, is descending into chaos and leaving white men grasping the shreds of what once was.

More polemic than panacea, The Age of Entitlement is one man’s screed against change. As such, it offers no soothing balm to the gloom it delivers.

A Covert Affair provides new insights into Julia Child’s world prior to her discovery of French cooking and her subsequent rise to fame as America’s first celebrity chef.