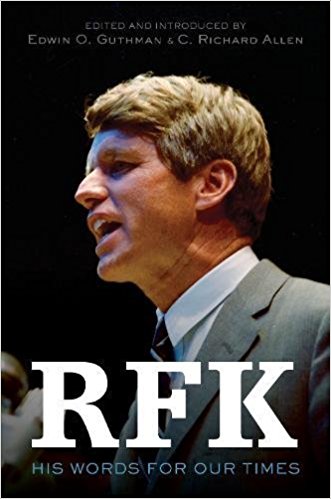 On the chilly, rainy evening of April 4, 1968, presidential candidate and New York senator Robert F. Kennedy climbed aboard the back of a flatbed truck in an impoverished neighborhood in Indianapolis. He had been barnstorming through the Hoosier State seeking to win the 1968 Indiana primary.

Shortly before boarding his plane in Muncie, he received word that Martin Luther King Jr. had been shot by a sniper in Memphis. When he landed in Indianapolis, Kennedy was told King had died. Fearful of a riot, the local police refused to protect Kennedy or escort him into the black neighborhood. The senator pressed on anyway.

In the car, an aide wrote some comments for Kennedy to deliver. Arriving at the designated neighborhood park, the aide slipped Kennedy the remarks. Kennedy crumpled them into his overcoat pocket. The crowd was in a festive mood. Kennedy asked if they’d heard what happened.

They had not, so Kennedy, speaking into the microphone, told the crowd, “I have some bad news for you, for all our fellow citizens, and people who love peace all over the world, and that is that Martin Luther King was shot and killed tonight.”

The crowd let out a collective gasp. Kennedy then went on to deliver extemporaneously from his heart his thoughts about King and America in 1968. It is considered his greatest speech. Kennedy continued, “In this difficult day, in this difficult time for the United States, it is perhaps well to ask what kind of a nation we are and what direction we want to move in.”

Fifty years later, those words echo back and haunt us. The United States of 2018 is not so far removed from where it was half a century ago. We live in equally divided times, people are polarized, the culture wars rage, and we seem adrift at home and around the globe.

Thus, the time is ripe for this reflective and excellent collection of speeches to reach bookstore shelves. RFK: His Words for Our Times is an updated edition of the 1993 book that marked a quarter-century since 1968. The book is sorely needed now to inspire Americans to seek what both Kennedy and King worked for yet never saw fulfilled.

Editor Edwin O. Guthman has done a yeoman’s service here in providing readers with the critical mass of Bobby Kenney’s words. After a stirring introduction by Rick Allen, readers encounter the reflections of a variety of notable personalities, some of whom were included in the 1993 edition. The luminaries include Presidents Obama and Clinton, the singer Bono, the Most Reverend Desmond Tutu, Marian Wright Edelman, Elie Wiesel, William Manchester, and Julián Castro, among others.

Arranged chronologically, the speeches begin in Kennedy’s early years when he dipped his foot into political waters after graduating from Harvard, and end just before the tragic day in Los Angeles’ Ambassador Hotel, where, on June 6, 1968, a little more than two months after King’s death, Kennedy, too, was felled by an assassin’s bullet.

In reading his words this way, one can trace the arc of Kennedy’s growth as a politician, but more importantly, as a human being. We have the “ruthless Bobby,” who was chief counsel for the Senate Racket Hearings (1956-1959) and as attorney general (1961-1964). We watch Bobby grow after his brother, President John F. Kennedy, was killed in Dallas in November 1963, becoming a more reflective person, incorporating into his speeches lines from the ancient Greeks and other philosophers.

Mellowed by his brother’s death, Kennedy increasingly began to draw his words from a well of compassion. In particular, as Kennedy grows, so, too, does his clarion call for social justice. He even exports his humanism to Apartheid-ridden South Africa in 1966 — most significantly with his “Ripple of Hope” speech — where he was treated with rock-star status by people living in that racially divided nation.

As senator from New York, Kennedy became an increasing voice of dissent against the war in Vietnam. By 1968, when he cast his hat into the ring for the Democratic nomination for the presidency, he’d split with President Lyndon Johnson’s war policy. Of particular interest is a speech he gave at the Greek Theatre in Los Angeles on March 24, 1968, reflecting on “Johnson’s Appeal to the Darker Impulses of the American Spirit.”

In retrospect, he and his campaign advisors regretted those remarks, and the commentary provided explains why this could have been a crucial mistake for then-candidate Kennedy. A week later, however, Johnson bowed out of the race.

Nowhere is this book more compelling than in the coverage of Kennedy’s presidential candidacy. His speeches are framed by exceptional historical commentary that drives the overall narrative of the book. We not only hear Kennedy’s words, but also see him physically thrust into the crowds that descended on him at various campaign stops.

He was mobbed by blacks, whites, Mexican Americans, and American Indians, for he represented a new kind of hope to a class of citizens who were marginalized and, at best, second class. In the Black Belt of the Deep South, Kennedy spoke with and touched people who needed help.

The book certainly can be enjoyed without any background knowledge, but it may help in the end to have read a Kennedy biography that provides additional information. Of particular note is Larry Tye’s Bobby Kennedy: The Making of a Liberal Icon.

There is a certain kind of sadness that hangs over RFK: His Words for Our Times, especially if you’re old enough to have witnessed the tragic outcome firsthand. One is left grieving again for what might have been and wondering how we can find a way to use Bobby Kennedy as a totem for our current troubled times.

James A. Percoco is a nationally recognized history educator and author who teaches middle and high school history in Ashburn, Virginia. As a 10-year-old living in Massachusetts in 1968, he was moved by the events of that seminal year.