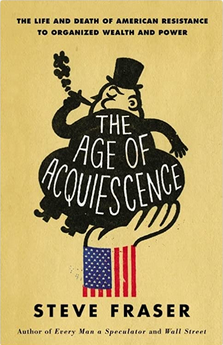 America, especially the middle and lower economic classes, is in trouble. Our infrastructure is a joke. Life expectancy for many is actually falling. Real wages continue to drop. And, according to Steve Fraser in his new book, The Age of Acquiescence: The Life and Death of American Resistance to Organized Wealth and Power, no one seems to care much.

It’s a harsh, broad statement. Unfortunately for us, he backs it up pretty well with a long look at how we reached this place. Workers living in Gilded Age 1.0 frequently went on strike to protest bad conditions and pay, sometimes so effectively that they shut down their towns or industries until corporate or government forces broke them up. Workers in Gilded Age 2.0? Not so much.

I fault Fraser a bit for putting the workers of the past on a pedestal, albeit a low-riser. They had a huge advantage over us mere mortal 21st-century citizens: Unions were much stronger in those days and that might be the single biggest reason why today’s generation hasn’t mobilized as much resistance to the power elite, which he acknowledges.

Yes, today’s average American is almost certainly more self-absorbed than his counterpart of 60 years ago. Fraser adds that to the debit side of the ledger when trying to understand today’s relative lack of resistance to whoever signs the paycheck. His point is echoed, perhaps more clearly, in a recent book, The Impulse Society, by Paul Roberts.

As Roberts put it, “Under our escalating drive for quick ‘returns,’ our whole socioeconomic system is turning on itself. Our traditions of collective action and personal commitment are fraying.” Fair enough, but it’s daunting for someone like me, typing away alone in a home office, to mobilize much of anything beyond my lunch menu when I don’t have a union steward to whom I can file a grievance.

He also derides the so-called “freedom” of the free-agent workforce. Sold as a way to “declare their independence” and think of themselves as “micropreneurs,” Fraser points out that they are also “free” of health care, vacation pay, and any prospect of job security. It’s a compelling argument that helps us understand how, if not why, today’s workforce appears more self-absorbed and, yes, acquiescent.

Perhaps I’m a little defensive because I feel he blames my cowering, navel-gazing freelancing group too much for today’s doormat workforce.

In any case, Fraser makes his case strongly when he illustrates the degree to which our political leaders are swayed by corporate interests. Democrats aren’t very different from Republicans. Fraser slams Bill Clinton for devoting most of the 1990s to embracing business at the expense of the average citizen. Fraser also calls out the media for being subject to “increasingly concentrated planetary business…now and then it does indeed function like a propaganda machine and a censor.”

Fraser has the courage to avoid a final chapter overstuffed with pat solutions to our national problems. Writers of tough, negative books are usually under significant pressure from publishers to offer at least a semblance of a happy ending. This book is all the stronger for his decision to steer clear of that route.

Fraser does manage to find a few slivers of optimism, but doesn’t oversell them. The Occupy movement was a positive sign, but its quiet shriveling wasn’t so encouraging. Seattle elected an openly “progressive” mayor, but that politician would be hard-pressed to find enough like-minded mayoral colleagues to fill a long table at the local Olive Garden. By the time you’ve turned the last page, it’s clear Fraser is more town crier than self-help author bearing shallow answers.

It took decades to get ourselves into this mess. It's going to take decades to get out of it. Fraser makes that all too clear in a book that deserves to spark a national conversation. Here's hoping.

Michael Causey is a defensive freelancer and a past president of Washington Independent Writers.