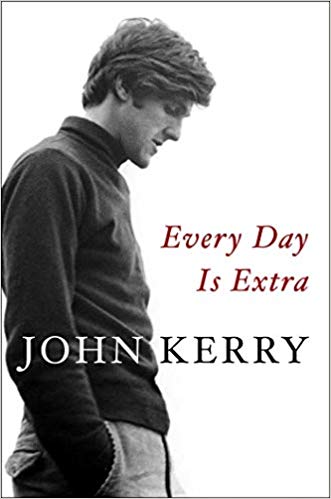 You don't have to be a Democrat to like John Kerry's new book. Titled Every Day Is Extra, the narrative is a bold remembrance encompassing one of the most troubled half-centuries in America.

Early on, Kerry recalls the 1960s, as reflected in his own coming-of-age amid discordant opinions over national allegiance and disloyalty. The story spans his childhood in the 1950s through the end of the 20th century and into the 21st. Kerry currently holds positions as a distinguished fellow at Yale University and distinguished statesman for the Carnegie Endowment for International Peace.

John Forbes Kerry, the son of a diplomat, was raised with patriotic goals and ideals and educated at Yale. Like his WWII-veteran father, he elected to serve his country, but in a different kind of war in a singular time: the era of the Vietnam conflict.

He joined the Navy along with several of his classmates and fought as a swift-boat runner in Mekong Delta swamps on ambush missions, which were measured by the U.S. as successes numbered in body counts. The young Kerry emerged with distinction as a decorated war hero, but the carnage disillusioned him, as did its seeming lack of purpose. Kerry questioned the United States' aims and goals, and in the years following, he became a veteran opposed to Vietnam.

In 1971, he testified before the Senate Committee on Foreign Relations and petitioned Congress to stop U.S. involvement in the war, which ultimately ended in 1975. Subject to criticism and shaming, he persevered in his convictions, which, years later, led him to the halls where he could make a lasting difference: the U.S. Senate.

His book title reflects the slogan of soldiers with whom he served, who adopted "every day is extra" as encouragement to survive and return home. For Kerry, the phrase reflects an attitude about life. In his words, “an expression of gratitude for survival when others did not make it…a pledge to live a life of purpose…to keep faith with the gift of my extra days."

Those days became decades of public service — first as a prosecutor in Massachusetts and then as lieutenant governor. Elected to the U.S. Senate in 1984, he eventually served five terms. Kerry became the Democratic presidential nominee in 2004 in a close-call election which he lost to George W. Bush by one state — Ohio.

Dusting himself off after the campaign, Kerry returned to the Senate, chaired the Foreign Relations Committee, and, in 2013, became secretary of state, traveling to broker peace in many of the world’s trouble spots, including the Middle East, Syria, and Iran.

In 2016, he signed the UN Paris Agreement on Climate Change on behalf of the United States while holding his 2-year-old granddaughter on his lap, a symbolic gesture indicating his commitment to protecting the planet for future generations.

As he tells his life story, which is largely positive, Kerry does not shrink from calling out mistakes he judges the U.S. has made in foreign entanglements and identifying the administrations and the individuals who made them.

He recalls the background of situations as they occurred; he includes profiles of friendships, including those with Senators Ted Kennedy and John McCain and President Obama, who, coincidentally, were making history themselves.

Kerry is particularly proud to have befriended McCain to "end the war about the war" by reviewing countless declassified documents and making trips to Vietnam to ascertain the fates of fallen soldiers missing in action who were suspected of being captured and held after the war by the North Vietnamese.

Using archaeological methodology — a fragment of bone, a scrap of clothing, a tooth — and also meticulous forensic investigations, Kerry and McCain's committee members "were able to uncover the remains of more than seven hundred service members brought home to still-mourning families who all deserved answers."

Another impressive feat recorded by the author was not only the work that he and McCain led to uncover MIA/POW evidence, but also the fact that they formed a genuine friendship. He concludes: "If a protester and a prisoner of war can find common ground on the most divisive of issues, finding common ground on almost anything else didn't seem so hard after all."

Such prevailing optimism is matched by Kerry's intelligent and practical appraisal of the historical and cultural reasons — the why — behind what motivates foreign leaders and informs their decisions. Clearly, optimism and research proved valuable traits toward effective diplomacy.

For 50 years, John F. Kerry has been on the front line of events known to most Americans only through newspaper headlines and TV reports. For this reason, and for many others, Every Day Is Extra is worthwhile reading. Not only is it the convincing telling of one life, it is also the faithful memoir of an era.

Janet A. Martin is a career journalist living in Gordonsville, Virginia. She is the author of Catch the Wind, a fictionalized memoir of four girls coming of age in the South in the 1960s. Contact her at jamcommunications@mac.com.

Winston Churchill: A Life in the News

An intriguing look at how the seminal statesman managed — and often manipulated — the press.